Battered by drugs or maimed by acts of violence, the Swedish artist's heads and torsos evoke human frailty

The subject of numerous museum shows, Anders Krisár’s work, often focussing on the human body, is held in some of the most important collections both in Scandinavia and abroad. The Stockholm-based artist works in sculpture and photography; although the work has stark differences according to medium, Krisár told Phaidon, “I don't separate my sculptural work from my photographic work, I almost don't think of them as two different media.” 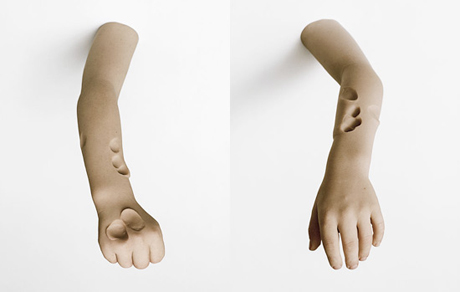 Krisár’s sculpture often features or makes reference to the human form, while his photography has tended to work with landscape, in which geography is reduced to near abstraction. Despite the apparent differences, Krisár’s work in both mediums exhibits a preoccupation with formal rigor and abstraction. Using this exacting approach, he employs precision of form to create intensely personal, psychological landscapes.

Krisár’s sculptures – immaculately produced, and often bearing a deliberate blemish that is itself impeccably rendered – are discomfiting, objects of simultaneous horror and beauty. The Birth of Us (Boy) features a child’s torso, marred by the indentation of two adult hand prints; in M the life size figure of a boy is split in two and then rejoined, so that a single figure becomes two halves, severed twins clasping hands. 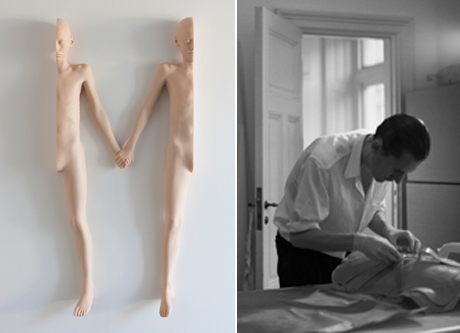 The violence that underpins both these sculptures is a recurring theme and is rendered with care and deliberation, so that it appears both aesthetic and inevitable. The sculptures are uncanny because of the meticulousness with which they are executed; according to Krisár, “I'm a perfectionist because I have to be, it's not really a choice. And it's not a striving for satisfaction, it's rather to avoid pain.”

There is a kind of formality to Krisár’s work, down to the simplicity of its presentation. Often the sculptures lie on the floor of the gallery, without a plinth, as with Bomb Suit (a bomb suit that has been exploded from the inside) and Sonja (a figure made entirely of a single woman’s clothing, archived over the course of her life). 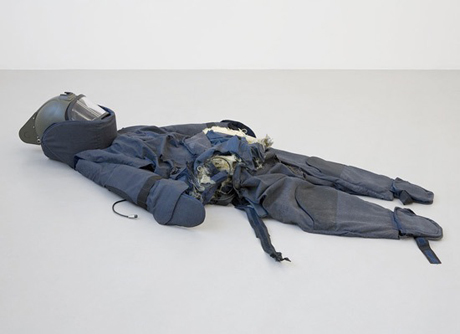 Both Bomb Suit and Sonja are complex works that find literal actions – exploding a bomb suit from inside, mummifying a woman in female clothing – to represent complex psychological states. Other sculptural work includes Medicine Mom (a mask entirely composed of medication taken by Krisár’s mother) and Wheel of Fortune (a circle of pills tracing the knock-on side effects of one medication taken after another). In these works, Krisár presents the psyche as both fragile and composed, created by social norms and mediation.

Returning to his photographs after considering his sculpture can be an eye-opening experience. We look for the break, or the rupture, in his cove photographs of the Seychelles, or his luminous horizon photographs. There’s no visible violence, no clear intervention – instead, the unreality of the natural world is captured in images that are not digitally rendered, but that have the sheen of impossible perfection. Krisár will have a solo exhibition at the Nordin Gallery in Stockholm in August.