Most posthumous retrospectives offer gallery goers the chance to catch up on a little art history, filling in the gaps in their knowledge. It’s rarer for a show to have quite as much contemporary relevance as Francesca Woodman’s 102-image retrospective, On Being an Angel, currently on display at Moderna Museet in Stockholm and overseen by Moderna's Anna Tellgren, which will open at Amsterdam’s Foam photography gallery next month, on 18 December. 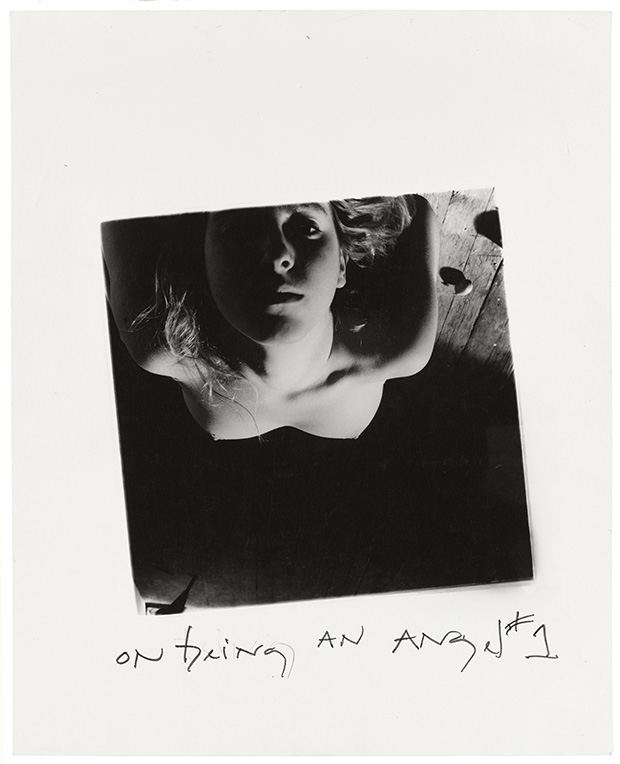 The most recent picture on display in the exhibition was shot over 34 years ago, yet for Foam curator Kim Knoppers, the pictures are as pertinent today as any Instagram post.

“The work is still very fresh,” says Knoppers, “because it is relevant to what is happening in photography today. There are many young photographers using their bodies in a performitive way today, putting themselves in the picture, and exploring gender just as Francesca Woodman once did. That is why I was very interested in showing this work right now.” 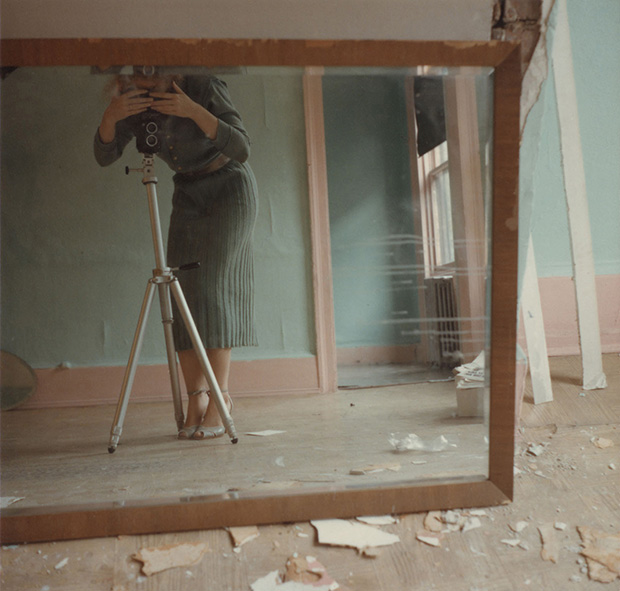 Copyright George and Betty Woodman. From On Being an Ange

Knoppers cites the young Dutch photographer Melanie Bonajo by way of example, yet we can all think of artists who have followed Woodman’s lead.

“Woodman was an artist with an interest in her own body and gender,” says Knoppers, “but whose work also has a dark edge. It’s a bit gloomy, a bit gothic, with a romantic twist.”

Woodman shot around 1,000 such images before she committed suicide at the age of 22, in January 1981. Despite her early death, her pictures, commonly taken in black and white on a medium-format film camera and featuring herself as a model, display a remarkably mature sense of coherence and depth, with surrealist and classical references worked into highly pertinent mediations on nudity, gender and voyeurism. 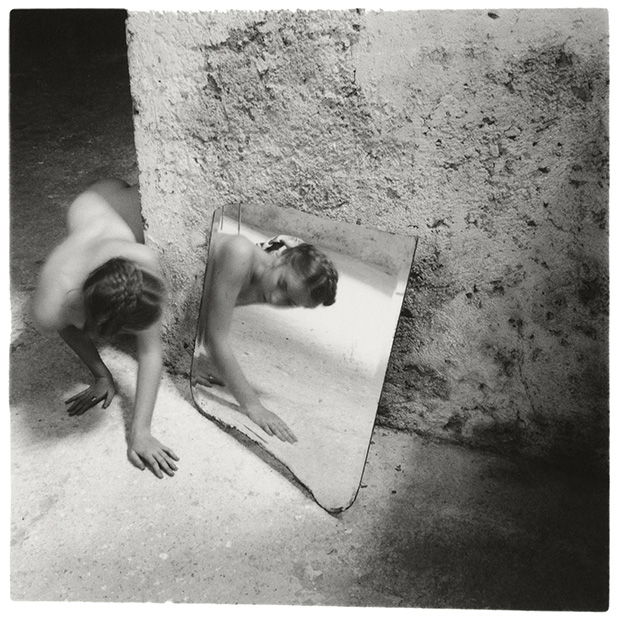 Self-deceit, No 1, Rome, Italy, 1978 by Francesca Woodman. Copyright George and Betty Woodman. From On Being an Ange

While her pictures were not well known during her lifetime, she has received a great deal of posthumous recognition as an important artist who changed the way we regard our bodies. The uppermost image in this post features in our new book Body of Art.

“Francesca Woodman (1958–81) made this photograph of part of a person and a trace of a body when she was a university student in Providence, Rhode Island,” the book explains. “She constantly experimented with space and light, and often chose dusty and dilapidated interiors as the setting for her atmospheric and elusive images. For reasons mainly of convenience, she became her own most frequent model.

Here, in a bare room flooded with sunlight, she appears in a sort of double disappearing act, a play of positive and negative forms. Sitting in a corner, with only her arms and lower body in shot, she seems to have unhitched herself from her shadow, which lies upside down at her feet, its head nearly touching the toes of her shoes.

The silhouette looks almost like a photogram (an image made by placing objects directly on to a light-sensitive surface) and contains another trace – a naked footprint – within it. Noticing this detail, it is tempting to search the image for other forensic clues to its construction – but what meets the eye is an array of lines formed by floorboards, mouldings and wainscot, leading to an invisible vanishing point somewhere far beyond the seated figure.” 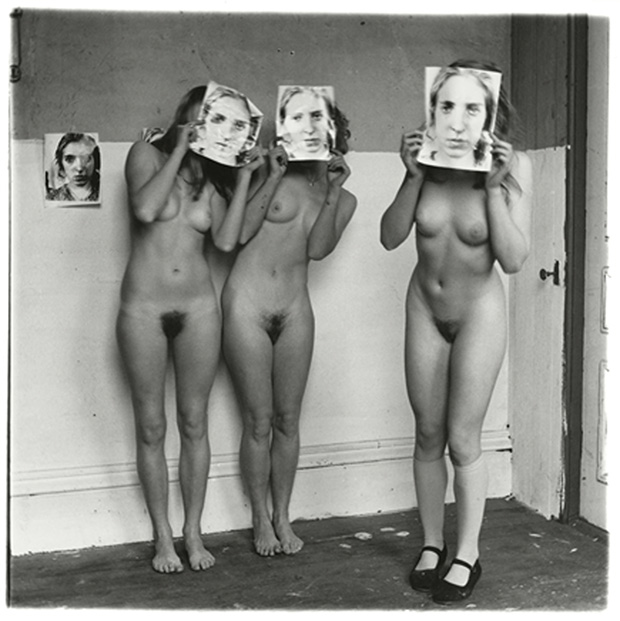 About Being my Model, Providence, Rhode Island, 1976, by Francesca Woodman. Copyright George and Betty Woodman. From On Being an Ange

Knoppers shares this analysis. “It is interesting that she is situated in the corner,” says the curator, “she often does that. She also uses these silhouettes in her pictures. And it’s also about the gaze. She is the model in her own photographs, and we as viewers are looking at her naked body. Yet she, as the photographer, controls this gaze.”

Knoppers also cites Yves Klien’s Anthropometry works, wherein the artist used models as “human paintbrushes” as a possible reference. Though, Knoppers cautions, Woodman’s painterly silhouettes were not created by a famous male artist, but by young girl. “She is doing it herself, it was an imprint of herself.”

Ultimately, Woodman died so young, that it is hard to draw any definitive conclusions about her principles or intentions.

“It cannot be said that she was a feminist, though her pictures are used in feminist discourse she is used a lot,” explains the curator. “You can’t say if she was comfortable or uncomfortable in her own body. I think, sometimes she was and sometimes she wasn’t. She used her camera to explore, just as other artists have used sketchbooks.” 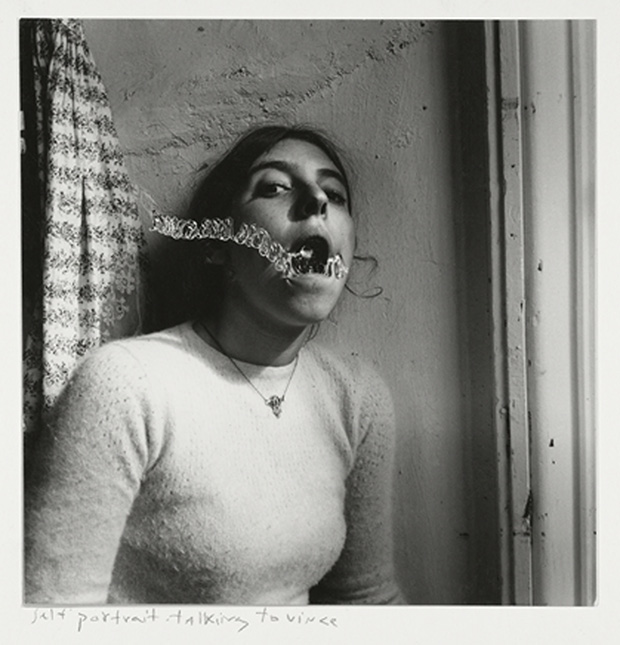 Self Portrait Talking to Vince Providence, Rhode Island, 1977, by Francesca Woodman. Copyright George and Betty Woodman. From On Being an Ange

Three decades later, these ‘sketches’ are still drawing in new viewers. Though influenced by other photographers like Deborah Turbeville and Duane Michals, Knoppers feels Woodman’s uncanny self-portraiture displays “a unique voice,” in an age when self-portraiture, gender and voyeurism feel as relevant as ever.

For more on Foam’s Francesca Woodman exhibition, On Being An Angel, go here. For greater insight into Woodman’s work within the greater sweep of corporeal creativity buy a copy of Body of Art here. And for more on this important artist, get a copy of our monograph, here.