As we go into the weekend serious collectors' eyes are on the important post-war and contemporary art sales being held at leading auction houses in London and New York next week. There are some truly impressive works going on the block at Sotheby's, Christie's and Phillips, many of which have interesting stories attached to them. With this in mind, we've benn bringing you some daily insight stories into some of the pieces on sale, courtesy of our wonderful catalogue of contemporary and modern art books.

"Many artists have left posterity with images of themselves, notably, among others, Rembrandt and Picasso," writes Joseph D Kettner II, in our Phaidon Focus book on Andy Warhol. "When we look at their self-portraits we glean insights into the character of the artist," he continues. "But it is important to remember that the artists have consciously crafted the impression that they wish to leave us. Warhol has joined the prominent self-portraitists over history. Tracing the development of his portrayals provides insight into his evolving construction of a public persona."

Warhol began drawing self-portraits while still a teenager in 1942.In his portraits from the following decade we see a shy artist staring back at us, while in those from the 1960s we see a confident Pop Star. After his attempted murder by Valerie Solanas in 1969 Warhol made no more portraits until 1978. In these, he presented himself as a reflective soul, examining his career and evaluating his life. Kettner takes up the story of the Fright Wig series, begun nearly ten years later under very different circumstances. 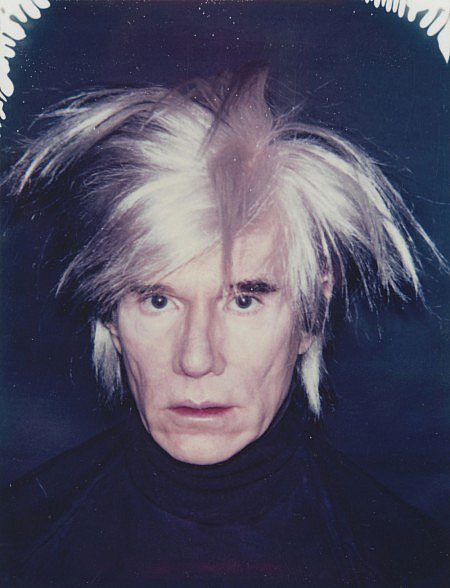 "Nearly a decade after these self-portraits, Warhol produced another series in 1986, the ‘Fright Wig’ self-portraits. In these paintings the artist created what was to become the most iconic image of himself. Commissioned by London art dealer Anthony d’Offay, these were created during a difficult time in his life when he was confronting the loss of friends and the erosion of his own fragile health. At the opening of the show the self-conscious Warhol described the paintings as ‘the worst pictures you’ve ever seen of yourself’. Yet, these self-portraits intrigued him enough to continue the series beyond the commission and create seven different variations on the subject: with the wig spiked up, closely cropped around his face, in negative, with glasses, and on camouflage grounds. D’Offay likened the images to a death mask and, indeed, in these paintings we see Warhol as the wizened artist, far removed from the wide-eyed days of Pop stardom, and looking into the face of his own mortality. Far from ceding to the finality of his deathly visage, however, the prospect of his demise appears to have motivated the artist into a torrent of creative activity over the last year of his life."

If you're thinking of bidding on Fright Wig, or indeed any other works on auction this season, we wish you luck. You can learn more about Andy Warhol in the following books: Focus, Catalogue Raisonné Volume 4, Portraits, and Giant Size. And if you want to spend a little more showing your love, check out the Warhol prints, photos (and surfboards) over at Artspace.

The 607 paintings and one sculpture documented in Volume 4 of The Andy Warhol Catalogue Raisonné were produced during a period of less than three years, from late 1974 through early 1977. In September 1974, Warhol changed studios, moving across Union Square from the sixth floor of 33 Union Square West to the third floor of 860 West Broadway. Like Volumes 2 and 3, Volume 4 is identified with a new studio, where Warhol continued to work for a decade, until he moved into his last studio at 22 East 33 Street on December 3, 1984. Volume 4 may be seen as the first in a series of books associated with one studio that will document an enormously productive ten-year period in Warhol's oeuvre from the mid seventies to the mid eighties. Specifications: