Andy Warhol's Death and Disaster series have always sat fairly high within the pop canon. Among the Brillo boxes (one of which is featured on the cover of Pop Art) and celebrity portraits, these screen-printed images of car crashes, electrocution chairs and suicides - conceived mainly in 1962 and '63 -  undercut the slick positivism of Warhol's early years.

Within the market too, they remain highly sought after. Damien Hirst bought a Warhol Electric Chair print for $3.5m back in 2006; and earlier this month, among the flurry of contemporary art sales, Sotheby's New York sold two from the series: an edition of Suicide from 1964 breached its upper estimate of $8m to sell for $16,322,500, (including buyer's premium), while a car-crash print, Green Disaster (1963) achieved $15,202,500. 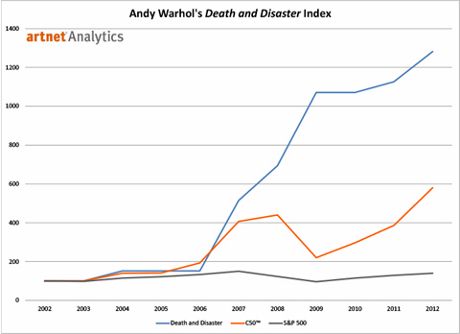 So how do these dark icons of 20th century life fare against the era's great engine of growth? Artnet thinks death still sells. In a report that partly promotes the online auction house and market data company's own Warhol sale, Artnet compares the performance of the Death and Disaster series against the venerable American stock market index, Standard & Poor's 500. While we can't vouch for the figures and calculations presented, it does look as if Hirst did well to bag that electric chair six years ago.

Artnet's own offering, a series of "rare experimental prints" including Satyric Festival Song (1986), might not have the same gravitas as the moodier, earlier images, though they certainly appear to be beautiful works and sound investments. Alternatively, you could consider our selection of Warhol books, including his catalogue raisonne, which we proudly publish. 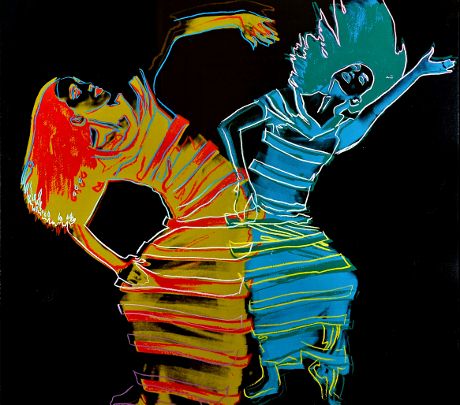 More on Warhol's Death and Disaster Vs Standard & Poor's