Auction catalogues aren't exactly up there with the Phaidon back catalogue when it comes to great reads, so its good to see auction house Christie's commissioning four of the English language's most engaging practitioners - novelists Jeanette Winterson and Jonathan Lethem, as well as the columnists and arts commentators Hilton Als and Kurt Anderson - to contribute to its Warhol at Christie's catalogues.

These catalogues are usually pics 'n' prices affairs (with the occasional exception) listing the works on the block at the next auction. But for its huge Warhol sale, coming up at the Rockefeller Plaza in New York on Monday November 12 Christie's has really pushed the boat out. Each piece is a great read, though Christie's appears to have favoured Anderson's contribution. This appears in every single catalogue, while Als' is only printed in the photographs catalogue, Winterson only in the prints catalogue, and Lethem only in the one for paintings an works on paper.

Hilton Als’ essay, Andy-As-Mom, considers Warhol’s maternal role in nurturing the Factory set. “Warhol’s photographs documented the playthings his children cherished,” Hills writes, “champagne glasses, glitter, city sidewalks, nail polish, tarnished dreams, and most importantly, hope.” Winterson dwells on Warhol’s background in advertising, and the repetitive nature of his art.  “It is worth remembering that for most of history most of humanity has been both religious and illiterate,” she writes. “The image/icon was everything – and recognition comes through repetition.  Warhol’s repetitions are a way of reminding us that indifference (seen it all a million times) becomes difference when we are able to stop skimming and start seeing. The surface gives way to what is under the surface.” 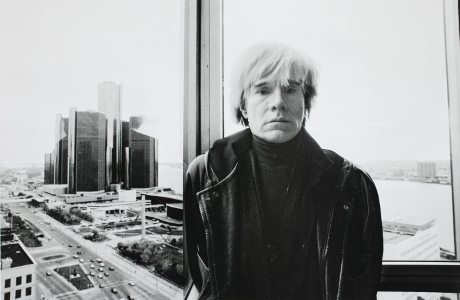 Lethem’s more impressionistic text, Andy Mirrorball, looks back to the lofts of Factory-era Manhattan, when “Andy Mirrorball [was] hidden somewhere inside like a spider”, as well as towards the later, quieter period: “having turned his lived days into a joke about lifelessness, his gestural gifts lurked in the conceptual shadows, behind his genius-renunciation of a genius-artist’s typical assertions of wisdom or depth.” Anderson’s essay is a pleasant, breezy read. The novelist, columnist and Spy magazine co-founder recounts his run-ins with Warhol, considers what a couple more decades of life might have meant: “As a matter of optimising his reputation for the long haul, he left earth at the right moment, I think. He successfully coasted into middle age, but another 25 years of coasting probably wouldn't have been good for the Warhol brand”.

Anderson rounds off with a good line about Warhol’s proposed Andy-Mat restaurants, which we wrote about recently too. He writes: “I think of the Andy-Mat, his 1970s scheme for a chain of fast-food places, a ‘restaurant for the lonely person,’ he said, where ‘you get your food and then take your tray into a booth and watch television.’ Replace the TVs with laptops: Starbucks.” As Anderson concludes, "It's Andy's world, in which we just live.” Bravo to Christie's for running these pieces. Not only do they enlighten their audience, they're also refreshingly frank and critical. You can see the ecatalogues here, browse the essays here, and if you like what you read, go further with a look at the seminal Warhol Catalogue Raisonne, a multi-volume series containing all the artist's works.