A Movement in a Moment: Young British Artists

On Damien Hirst’s birthday, we look back at the London movement that propelled him and his fellow Brits forwards

Britain’s most-prominent 20th century art movement did not begin with a manifesto, or the bold declarations of like-minded artists, but instead with an art exhibition so accomplished and slick, it looked more like the work of a seasoned gallerist, rather than a callow undergraduate.

“Organized by second-year art student Damien Hirst, “Freeze” is legendary as the originating moment of the “Young British Artists” (“YBAs”), a group that rose to prominence with the support of collector Charles Saatchi,” writes Bruce Altshuler in our book Biennials and Beyond. “Despite the fact that many of the YBAs were not in “Freeze,” the show has been seen as having played a founding role similar to that of many artist-organized exhibitions in the history of early modern art. The primacy of Hirst’s entrepreneurship and marketing ties “Freeze” to its time, to the credo of self-help and personal initiative promoted during the Thatcher years.”

Freeze did not include every Young British Artist, nor every prominent YBA work, yet it summed up much of the spirit of those young, soon-to-be-successful Brits. “The Young British Artists, a term applied retroactively in 1992 and then, as the YBAs, in 1996, emerged in the late 1980s and early 1990s,” explains our book Art in Time. “Most had studied art at Goldsmiths College or the Royal College of Art in London, and many had caught the eye of collector Charles Saatchi. 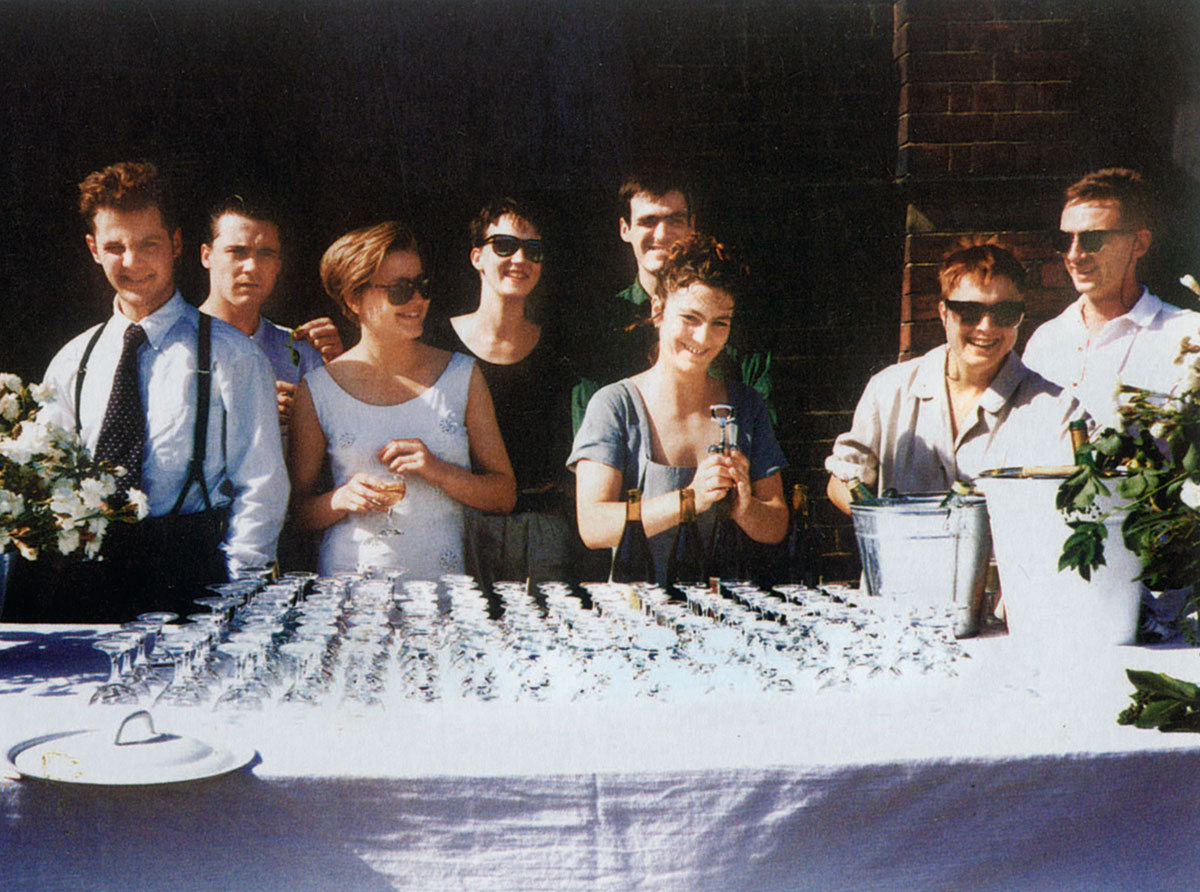 “Damien Hirst, the leading member of the YBAs, curated their first show in 1988, titled ‘Freeze’. Now one of the highest earning artists in the world, Hirst’s notoriety resulted initially from the shock value of his work, including his series of preserved animal carcasses presented in glass vitrines of formaldehyde. He is renowned for his market savvy, and was the first artist to discard his dealer and sell his work directly through high-end auction houses.”

This nascent talent was apparent at Freeze, both in Hirst’s work and deportment, and in his fellow artist’s stance. “Most of those exhibiting in “Freeze” were current or recently graduated art students at Goldsmiths’ College,” Altshuler goes on. “Here the innovative curriculum eliminated divisions between disciplines, and instructors such as Richard Wentworth and Michael Craig-Martin, emphasized an art of articulate conceptualization. Craig-Martin encouraged professional initiative among his students, and connected them with important figures in the London art-world. Among those whom he encouraged to visit “Freeze” were Nicholas Serota, who became director of the Tate during the show, and Norman Rosenthal of the Royal Academy. The tale of Damien Hirst’s taking them personally to the exhibition is a highlight of “Freeze” folklore.

“Freeze” was mounted in three parts over two months, with changing works by the same artists. It was open Wednesdays through Sundays, noon to 7 p.m. Hirst had obtained from the London Docklands Development Corporation the use of an empty administrative building in an industrial area slated for commercial development. The catalogue was funded by Olympia and York, which was constructing nearby Canary Wharf. The artists spent weeks cleaning the building, and the space housing their exhibition evoked the white cube aesthetic of the Saatchi Collection’s renovated warehouse in St. John’s Wood, in northeast London, where works by many “Freeze” artists would find a home. The same professional look characterized the catalogue designed by Tony Arefin, which featured colour plates for every artist in the show. 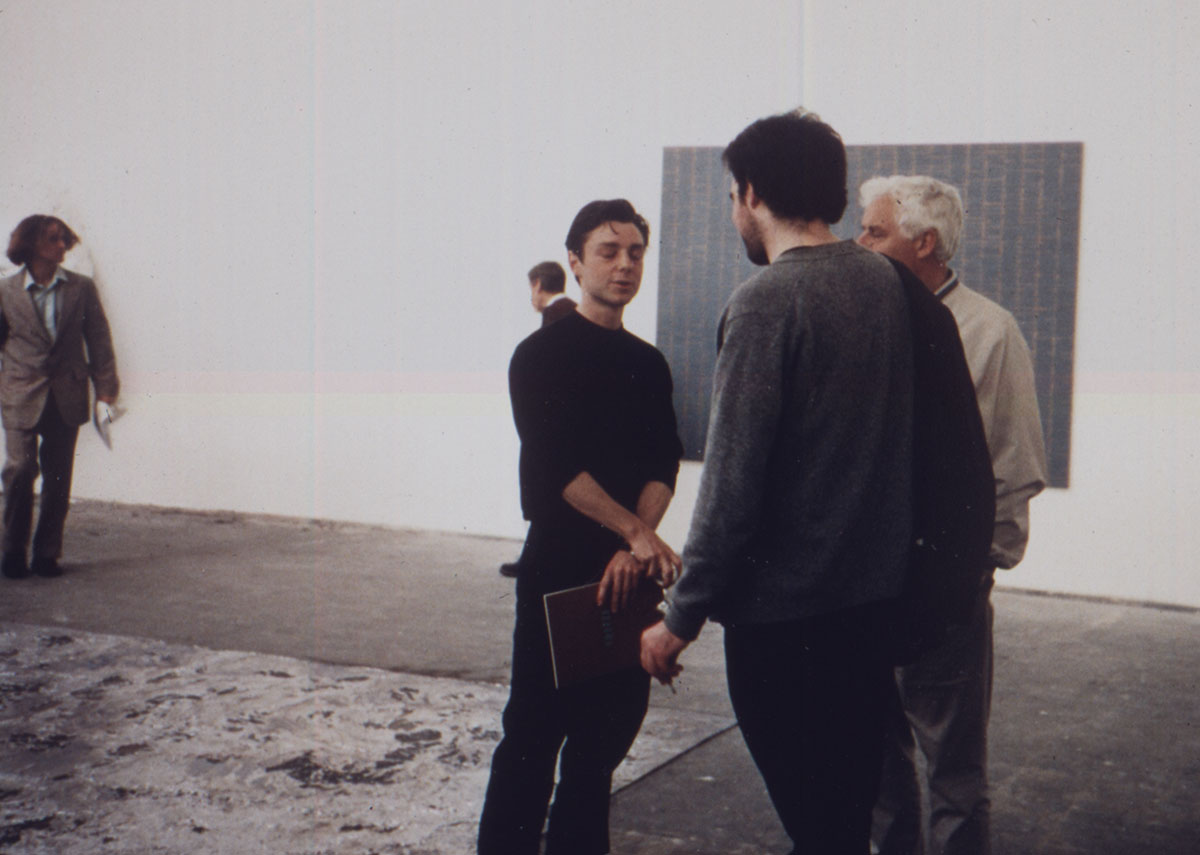 Opening night of “Freeze,” part 2, with (left to right) Richard Patterson, Miles Glenn, and Matt Patterson, and works by Angus Fairhurst on the wall. The lead and bronze floor piece is Anya Gallaccio’s Waterloo. As reproduced in Biennials and Beyond

What’s more, this initial exhibition was just the first of a series of smart, self-promoting shows from Hirst and co. "“Freeze” led to a series of well-attended group shows in 1990 in other disused industrial spaces in London,” writes Altshuler. “The first was “Modern Medicine,” organized by Hirst, Carl Freedman and Billie Sellman in a former biscuit factory in Bermondsey. “Gambler” followed at the same site, with Charles Saatchi purchasing Hirst’s installation of a rotting cow head and electrified flies. And back in Docklands, Sarah Lucas and Henry Bond curated the immense “East County Yard Show.”

Commercial success followed in the 1990s, as did rising international and local attention. In 1992, the Saatchi Gallery mounted the first of three “Young British Artists” exhibitions, and Charles Saatchi’s efforts culminated in the controversial 1997 Royal Academy show of his collection, “Sensation.” Through the decade contemporary British art helped to reinvigorate London as a creative capital, a place of exciting cultural opportunities surrounding an expanding financial centre. And anticipating it all was the ambition and energy of “Freeze.””

It is unclear whether that energy has fully dissipated. Today, Hirst celebrates his 52nd birthday, can no longer be described as young, yet his entrepreneurial spirit remains undimmed. Other YBAs, such as Sarah Lucas, Mat Collishaw and Tracey Emin Rachel Whiteread now conduct respectable, mature careers, and no longer need to rely on the kind of guerrilla gallerism that propelled them to fame. Meanwhile, the spirit of the YBAs lives on, in many thousands of impromptu shows, that young curators manage to stage in the British capital to this, despite the significant hike in rents Londoners have endured since Freeze closed its doors.

For more on the YBA’s place in art history get Art in Time. Meanwhile, for more on Freeze, including reproductions of many images and documents from the show, get Biennials and Beyond.