Decoding the language of art criticism

Fifty years ago curators were behind-the-scenes enablers of museums and galleries. Their main purpose was to care for collections and give shape to displays. For a special exhibition, they’d secure loans and oversee shipping and installation of artworks with gloved hands. No obvious thumbprint of authorship was to be stamped on such shows.

You only need the most casual snapshot of today’s art world to realise a revolution has happened. In place of the humble museum steward we have uber-curators like Hans Ulrich Obrist or Nicolas Bourriaud, whose names carry grand-scale art biennials and whose anointment of artists can make careers. The dry educational survey has been transplanted by high wire concept shows, woven around curatorial conceits that might equally be fed on a personal blend of theory, fiction or politics.

Exhibitions can become artworks in their own right, as with artist Jeremy Millar’s landmark ICA show, The Institute of Cultural Anxiety (1994), which mixed up artworks with cultural artefacts that veered from a meteorite to a Jean Michelle Jarre soundtrack. While an artist like Goshka Macuga has made curating itself her medium, artists of all stripes regularly turn curator, from Brit Art star, Mark Wallinger to Japanese pop icon Murakami or theory-head Liam Gillick, to name a few. 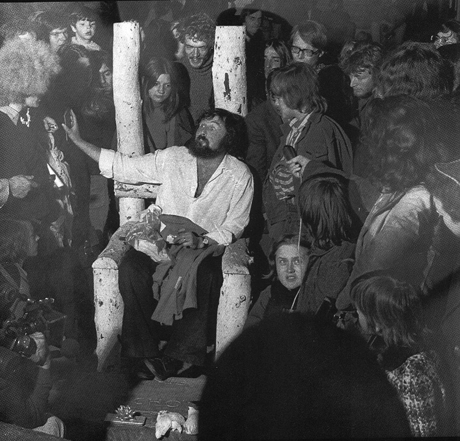 Curator Harald Szeemann taking questions from the press at the close of Document 5 in Kassel, Germany, 1971

It’s impossible to imagine this current state of affairs without the late visionary Swiss curator Harald Szeemann, who died in 2005 at the age of 71. Often described as the first freelance curator, he turned exhibition making into starry authorship. His first landmark, When Attitudes Become Form (1969), channelled the breakdown of specific art media that got going in the 1960s, with work by 70s artists including Eva Hesse, Sol Le Witt and Michelangelo Pistoletto.

Meanwhile Szeemann’s 1972 rendition of Documenta transformed the exhibition model, structured as it was, not around mediums but themes like ‘individual mythologies’, while performance, lectures and outsider art were added to usual roster of sculpture and painting. His innovations have set the mould for today’s curators, mixing up work from different generations and mediums, while freely referencing ideas from beyond art’s usual bounds, including history and science.

Here in the third millennium, the word curator has undergone a further shift in usage. Appropriated by the marketing departments of businesses keen to imbue their products with an air of hard-won distinction and borrowed avant-garde cool, it is now used to describe anybody from the celebrity programmer of a pop festival to a fashion stylist who puts together a 'capsule collection' from a department store's fall/winter stock. A curator, here, is essentially a paid selector of stuff for sale, whether it be concert tickets or cuff links. Notably, commercial art galleries tend to fight shy of describing their exhibitions staff as 'curators', leaving the title to professionals in the not-for-profit sector who tend not to profit from the works that they choose to display.