Will Sakamoto bring his silent tearoom to Sharjah?

Following our story yesterday about the globe-tilting Sharjah Biennial, news reaches us that one of our favourite creatives might be bringing one of his more intriguing works to the Emirati event.

Ryuichi Sakamoto, the electronic music pioneer, is perhaps best-known to many for Forbidden Colours, the theme he wrote for the 1983 film Merry Christmas Mr Lawrence which starred David Bowie. However, he has, throughout his career, strived to elevate his musical performances and compositions to the level of high art.

Last year he worked with the Sharjah Biennial's current curator, Yuko Hasegawa, on the Museum of Contemporary Art Tokyo event, Art & Music—Search for New Synesthesia, both as an exhibitor and as a “general advisor” for the exhibition,which sought to explore the common ground between visual and aural arts.

Working with the jazz musician and sound engineer Seigen Ono, and founder member of the Kyoto art collective, Dumb Type, Shiro Takatani, Sakamoto produced two excellent pieces for the event. One, Silent Spin, consisted of a darkened, box-shaped construction, modelled on the traditional Japanese tea-ceremony room, fitted with special “stillness panels” designed to stifle exterior noise, enabling visitors to take in Cage-ian levels of quiet, or, in the museum's words, “to hear the infinite universe.”

The other, Collapsed, consisted of a work for two pianos and a laser projection system. Lines from famous works of philosophy, such as Plato's Republic, were projected onto the gallery walls, while computer algorithms analysed the text, turning it into a kind of musical rendering, which the pianos then played back. 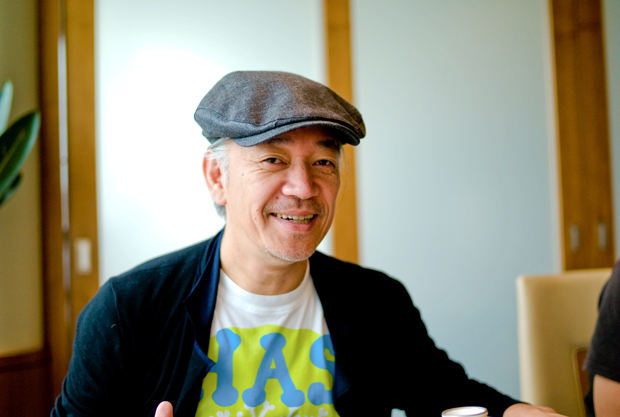 We aren't sure whether these very pieces will appear at the Sharjah Biennial; however Sakamoto will be working with both Ono and Takatani again, under the same curator. Even if the pieces aren't identical, visitors can certainly expect to see and hear some bright, challenging works.

For more on the Sharjah Biennial, visit their site; for more on Ryuichi Sakamoto, visit his website ; to learn about the turbulent stories behind some of era defining art events, please take a look at our new book (of which we're very proud) Biennials and Beyond.