What the world's press are saying about Frieze

As London's international art fair opens for previews in Regent's Park today, we round up global opinions

"Balance the buzz and the business" is how the Wall Street Journal characterises the intentions of Frieze London's organisers. The fair opens for previews today in London's Regent's Park, begins officially tomorrow and runs until Sunday. Mary M Lane writes in the paper that misgivings among the fair's management that "crowds and parties were starting to elbow out sales," has lead to a "smaller, more focused event." Ticket numbers have been cut by a fifth according to the WSJ's reckoning, while the number of galleries has been trimmed by 15% or so, from 175 last year to 152 today.

These restrictions have lead to greater focus within individual booths themselves, as more and more galleries concentrate on a single artist. The paper highlights the Lisson Gallery's single installation in booth B10, by Dan Graham; Blum & Poe's $400,000 painting by Takashi Murakami in stand H3, and Thaddaeus Ropac's $1.8 million abstract sculpture by Georg Baselitz in B11.

Despite this apparent slimming down, Bloomberg reports "Frieze and its offshoots have grown into the biggest seven-day concentration of art-market events in any European capital." 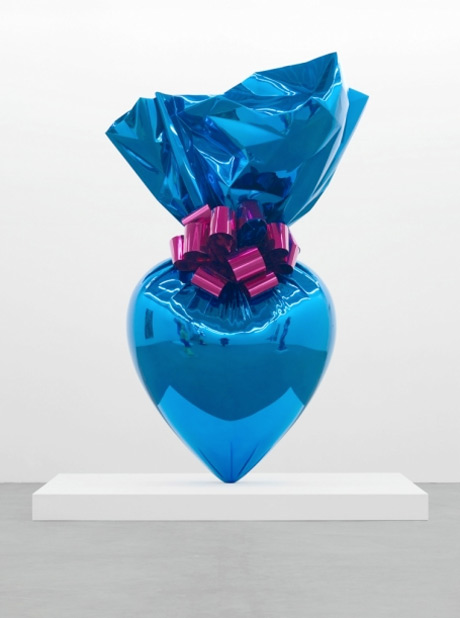 The news service alights on Gagosian's Frieze booth (D8), which will show Jeff Koons' brightly polished Sacred Heart (Blue/Magenta), (1994-2007). The piece notes "Gagosian never discloses prices to the media," yet Bloomberg goes onto observe, "a version of 'Balloon Dog' from the series is estimated to sell for between $35 million and $55 million at Christie's New York next month."

A little further down the price points, Bloomberg also highlights the Colombian-born painter, Oscar Murillo, "now hailed by some as the new Jean-Michel Basquiat" at David Zwirner (G12), and Hauser & Wirth's exhibition of Sterling Ruby's SP246 painting, which, "priced at $550,000," typifies  "the upper price levels at a fair that specializes in works by younger, living artists."

With this in mind, Peter Aspden, writing in the Financial Times, suggests fair goers should "act rich". The writer observes that at £20,000, the average Frieze work costs more than an Alfa Romeo. More interestingly, he suggests that Middle Eastern and Chinese galleries may offer the most compelling exhibits. "The works often lack the formal sophistication of their western counterparts but art from countries that have a compromised view of freedom of expression is at the front line," Aspden writes. "It is part of a complex interaction between government and society that can help make a difference." 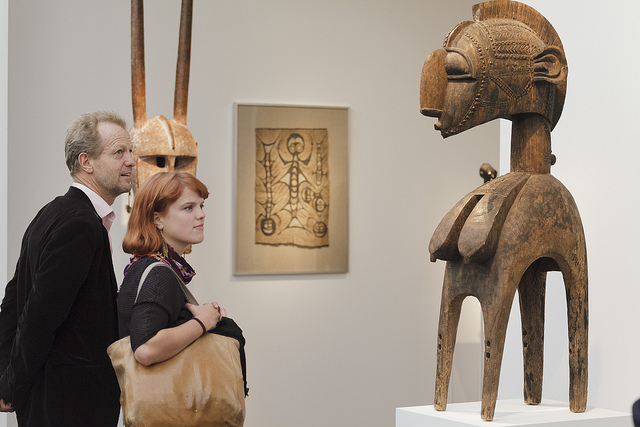 Such diversification is apparent at Frieze Masters, where galleries show pieces made before the year 2000. The Art Newspaper reports that, while there are plenty of "white, European and American male artists from the canon of art history", (Alexander Calder (Dominique Lévy, E3; Galería Elvira González, E8), Donald Judd (Simon Lee Gallery, C16), Willem de Kooning (Mnuchin Gallery, B6; Skarstedt Gallery, F1), Pablo Picasso (Edward Tyler Nahem, E11; Edouard Malingue Gallery, F5) and Henri Matisse (Thomas Gibson Fine Art, F3)); there is also signs of increased diversification, with a greater representation of female artists, as well as tribal and folk art, and works by artists outside of the developed world. 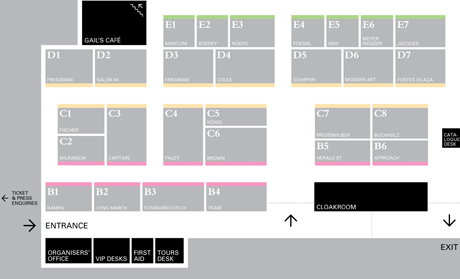 Detail from this year's Frieze map

Yet, this isn't sufficiently diverse for some commentators. The Guardian interviews noted British painter, John Keane, who was appointed the official Gulf war artist by the Imperial War Museum. Keane, despite his plaudits, has never shown at the fair. He believes Frieze is too selective and has an unhealthy relationship with the contemporary art establishment. In particular, he criticises the Outset fund, a charitable foundation that enables the Tate to buy works at the fair.

"It is almost like a supermarket sweep," says Keane. "The Tate is allowed in early to look for the best stuff. It might be exciting, and I congratulate Frieze for becoming so successful, but if you happen to be outside the loop it doesn't look quite so good."

Is this a criticism too far? After all, no one should expect democratic accountability and absolute inclusiveness in a private event such as Frieze, no matter how big it gets. If you're among the lucky few inside the loop, we wish you a pleasant few days. Get a map of the fair here, consider a copy of our insider's guide to acquiring a collection, Collecting Art for Love, Money and More; to make sense of events like these, pick up a copy of our book Biennials and Beyond; and do check back here for regular updates.