On Malcolm X Day, we look at the events surrounding an iconic shoot by the Magnum photographer

Ninety-two years after his birth, its easy to forget just how radical were the changes to society demanded by the African American Muslim minister and human rights activist Malcolm X. On Malcolm X day we can turn, for a reminder, to the Magnum photographer Eve Arnold who met and photographed him.

“The Nation of Islam called for separation from the United States, the ceding of the entire US eastern coast to the Muslims, and the protection of their women from harassment (sexual or otherwise) by the white man,” recalled the photographer in our book Magnum Stories. “They were militant. The members of one wing of the movement, called ‘The Fruit of Islam’, were taught to kill with their bare hands. The total membership was estimated at no more than 6,000 when Malcolm started as a leader under Muhammad, who was also known as ‘The Messenger’, but by 1959 it had reached more than 100,000.”

Some saw this as outrageous, yet Arnold simply recognised an excellent photographic opportunity. After some persuasion, she managed to gain access to Malcolm X and his associates, travelling to Washington DC to shoot their convention, which, somewhat bizarrely, numbered members of the American Nazi party among its delegates. 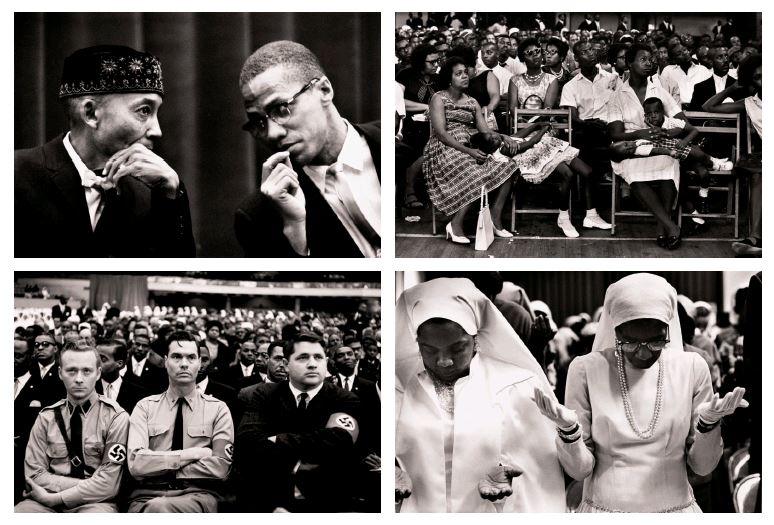 A spread of Eve Arnold's 1961 Malcolm X photographs from our book Magnum Stories.

“George Lincoln Rockwell, their leader, hissed at me, ‘I’ll make a bar of soap of you,’” Arnold - who is Jewish - wrote in our book. “My retort was less than brilliant, ‘As long as it isn’t a lampshade.’ The exchange came after Arnold was frisked for weapons by veiled women dressed in long white robes, and a speech from Elijah Muhammad who thundered from the rostrum that ‘The Devil is a white man!’

"Shaken, I went in search of the reason for the Muslims’ unholy alliance with the Nazis," Arnold recalled. "The answer was that they had a common goal – to divide America between them. The Muslims would get the eastern seaboard, the Nazis the rest.” Thankfully, when the photographer did manage to spend time with Malcolm X one-on-one, relations were more reasonable and cordial.

“Malcolm was cooperative and considerate. As we worked together, the passionate orator who could whip a crowd to euphoria began to unbend and to think of situations to provide material for the feature. First he asked me to dinner at a restaurant in Harlem owned by the Black Muslims. The place was spotless (the Muslims were always saying whites didn’t bathe and smelled bad). Malcolm was charming, made small talk to put me at ease, and said some gracious words about my work.” 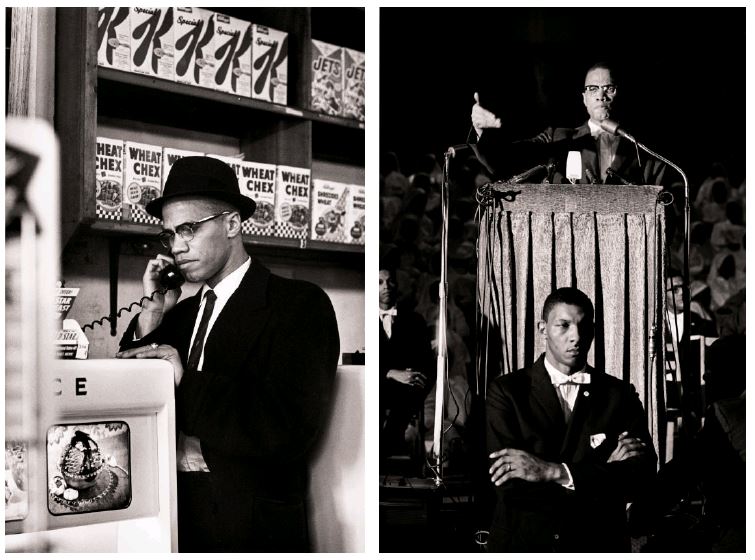 A spread of Eve Arnold's 1961 Malcolm X photographs from our book Magnum Stories.

Despite gaining incredible access to Malcolm X, Arnold had to struggle to get her feature published. Life initially planned to run her pictures, but eventually cut the story, for fear of offending its readers; Arnold passed it instead to Esquire, which debuted these shots across 12 pages. “After that, it ran everywhere” she recalled.

The shots were displayed again in 1992, in an exhibition staged to coincide with the release of Spike Lee's Malcolm X biopic. Curators asked Arnold to remove the Nazi images, and she refused. “I sent a message back saying, ‘No way,’” Eve recalled. “They said, ‘But the Muslims say it never happened.’ I replied, ‘There’s the proof. I didn’t conjure them up. There are the pictures.’”

“At the opening, three young black men came over and said, ‘Thanks.’” Arnold remembered. “‘For what?’ I said. ‘For making Malcolm look like a dude.’ And I said, ‘But I didn’t.’ He was attractive. . ." For more tales from Magnum greats get Magnum Stories and Magnum Photobook: The Catalogue Raisonne