“The Decisive Moment, published on 15 October 1952 in the United States and simultaneously in France as Images à la Sauvette (which translates roughly as ‘Images on the Sly’), may have been the most important photographic book of the last century,” write Fred Ritchin and Carole Naggar in Magnum Photobook: The Catalogue Raisonné. “Its elegantly simple large-format design and the rich tones produced by the heliogravure printing that showcased the pointed, exquisite formal quality of so many of the French photographer Henri Cartier-Bresson’s 126 35-millimetre photographs, made the book an emphatic statement of complex, independent seeing by a pioneer of photographic language.”

What is surprising about this brilliant book, is that Cartier-Bresson’s images didn’t arise from a period of sustained artistic assuredness, but rather from a crisis of uncertainty.

A spread from Henri Cartier-Bresson's The Decisive Moment, as reproduced in Magnum Photobook: The Catalogue Raisonné

Born into a rich industrial family, manufacturers of the Cartier-Bresson brand of sewing thread, Henri tried painting initially, before turning to photography and taking up with the surrealists. He began to shoot photojournalism prior to the outbreak of World War II, but only committed himself to practice fully following the fall of Nazi Germany. "Back in France, I was completely lost," Cartier-Bresson told Le Monde, describing his experience after World War II. "At the time of the liberation, the world having been disconnected, people had a new curiosity. I had been engaged in looking for the photo for itself, a little like one does with a poem. With Magnum was born the necessity for telling a story. Capa said to me: 'Don’t keep the label of a surrealist photographer. Be a photojournalist. If not you will fall into mannerism. Keep surrealism in your little heart, my dear. Don’t fidget. Get moving!' This advice enlarged my field of vision.”

“After World War II Cartier-Bresson’s work became less abstract and more journalistic,” Fred Ritchin writes. Yet he didn’t entirely abandon fine art, as the jacket of The Decisive Moment makes clear. “The cover, designed by Henri Matisse, reflects the photographer’s early affinity for painting. The imagery within straddles the line between artist and photojournalist, a synergy that he engaged for much of his career. And a well-formulated text reveals, among other insights, Cartier-Bresson’s oft-quoted theory of the ‘decisive moment’ explain the authors.  'To me, photography is the simultaneous recognition, in a fraction of a second, of the significance of an event as well as of a precise organization of forms which give that event its proper expression,' Bresson said.

Though the book’s title came to represent the acme of photojournalism - the practice of capturing a split-second on film that describes a greater story - Cartier-Bresson was drawn to book-making because it was quite unlike news media. 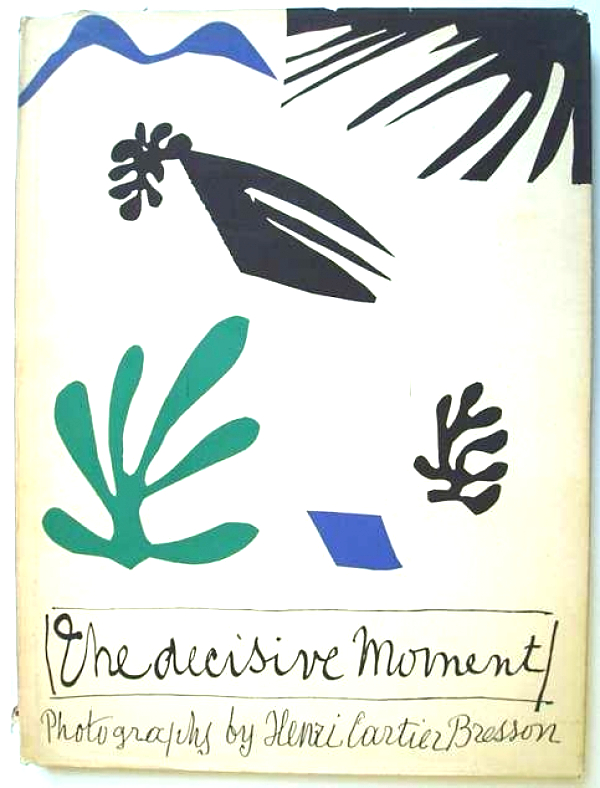 “The Decisive Moment was Magnum co-founder Cartier-Bresson’s first book and, according to a letter he addressed to his colleague, Marc Riboud, it was the publishing medium that he had come to prefer,” explain the authors. “'Magazines end up wrapping French fries or being thrown in the bin,’ he wrote, ‘while books remain.’

“Conceived and composed by the Parisian publisher Tériade with the collaboration of Marguerite Lang, The Decisive Moment allows each image to nearly touch the edge of the page, and includes a caption booklet so as not to interrupt the visual flow. The Decisive Moment is a modest, even ambivalent book. As the photographer cautions the reader: ‘These photographs taken at random by a wandering camera do not in any way attempt to give a general picture of any of the countries in which that camera has been at large.’”

Nevertheless, Cartier-Bresson’s photos found their own way into world events, far from his home in Paris, as Richtin explains. “A catalogue of the photographer’s solo exhibition at New York’s Museum of Modern Art – planned when it was thought that Cartier-Bresson had been killed during World War II – was published in 1947. The following year, after having been introduced to Mahatma Gandhi in India, Cartier-Bresson showed him the small book. Sitting cross-legged on the ground, Gandhi carefully turned the pages. He is said to have remained silent until he came upon a photograph of a man looking at a fancy hearse, when he asked: ‘What is the meaning of this picture?’ Cartier-Bresson responded, ‘That’s Paul Claudel, a Catholic poet very much concerned with the spiritual issues of life and death.’ Gandhi, reflecting for a moment, then uttered just three words: ‘Death. Death. Death.’ Fifteen minutes later, after Cartier-Bresson had bicycled away, Gandhi was assassinated.”

For more on Magnum, its founders, books and legacy, order a copy of Magnum Photobook: The Catalogue Raisonné here.