The artist is encouraging young Brits to vote to stay in Europe with a series of snappy posters, downloadable here

He was born in West Germany, when the country was still divided by the Cold War. He studied in Britain, finding his initial fame shooting photos for the London youth-lifestyle magazine, i-D, and he won the UK’s Turner Prize in 2000.

So it perhaps shouldn’t come as a surprise to discover that photographer Wolfgang Tillmans sees himself as a distinctly European artist. What is perhaps a little more surprising though, is that Tillmans, who tends to maintain a moderate and reserved public image, is endorsing the ‘stay in’ campaign in Britain’s upcoming EU referendum, and has created a series of posters available for download from his website.

Tillmans is particularly keen to get young people to register in order to have their say. “I want to work towards maximizing turnout among younger voters by focusing on the first, crucial step: voter registration – the deadline for which is June 7," he says, pointing out that “anyone who hasn’t registered before this date has no chance of having a say, no matter how strongly they feel about the issue." 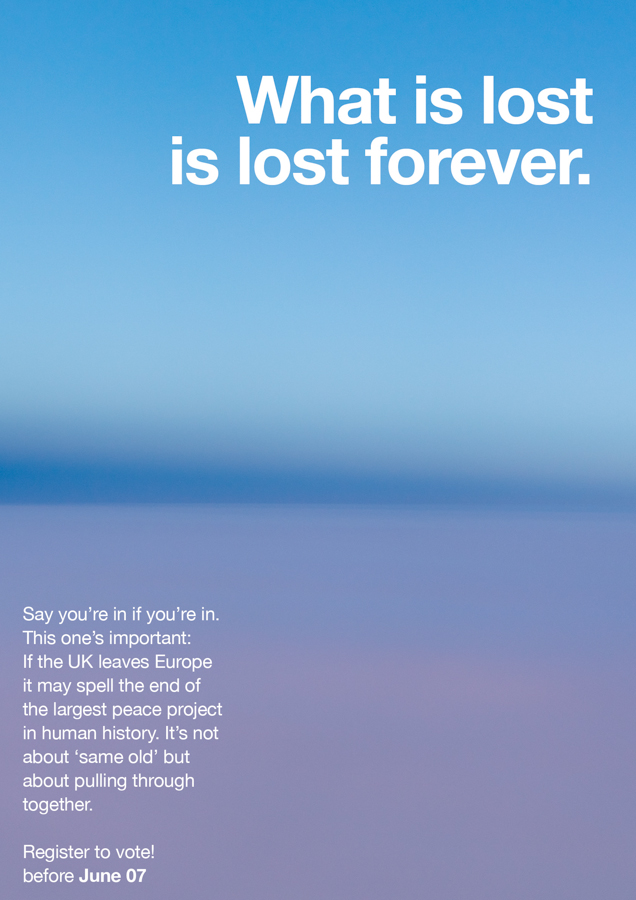 “Everyone’s grannies registered their vote long ago, but students no longer get automatically registered by their universities," Wolfgang says. "This is because of a new law brought in by the Conservatives that makes it possible for them to disenfranchise up to 800,000 students, who as a group tend to move around a lot more and so drop off the voter register easily." Tillmans believes the UK has reached a critical moment that could prove to be a turning point for Europe as we know and enjoy it  – one that might result in a cascade of problematic consequences and political fall-out.

"Firstly, the weakening of the EU is a goal being actively pursued by strongmen like Vladimir Putin and European parties on the far-right," he says. "Brexit could effectively spell the end of the EU. It may be a flawed and problematic institution, but on the whole it stands for a democratic worldview, human rights and favours cooperation over confrontation.”

When we caught up with Wolfgang earlier this week we asked him about his efforts to get young people to register and vote against Brexit. 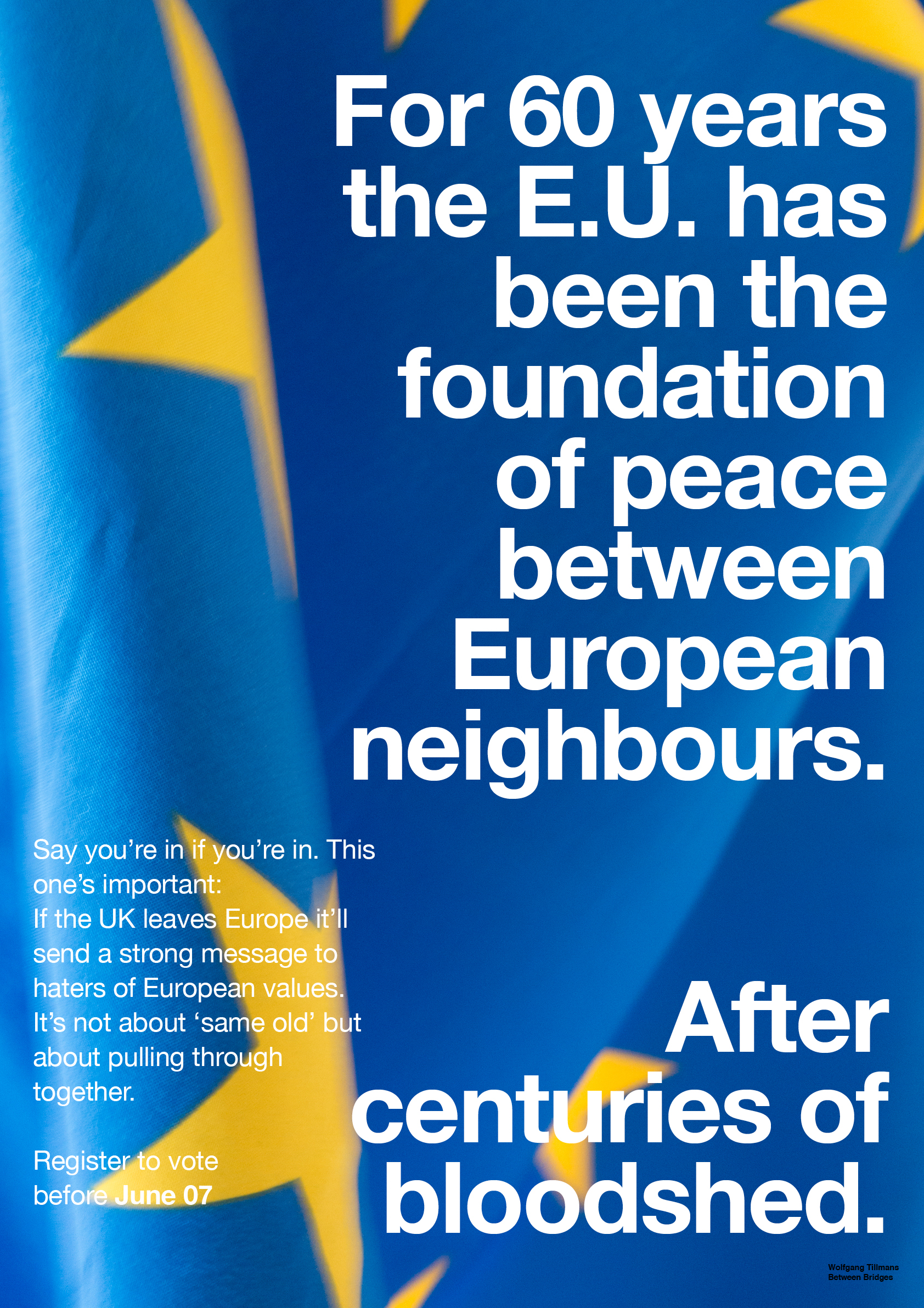 Is your campaign part of a growing political awareness among contemporary artists? "I honestly am speaking as a concerned citizen. This term has been much tarnished: xenophobic mobs in Dover posing as ‘just concerned citizens’, angry mobs in Dresden saying they are just ‘concerned about the Islamo-fication of Europe’. It’s time for decent people to raise their concerns. Why did we experience a period of peace and growth for 60 years and did so, without having to retort to xenophobic lingo? The centre ground has to stand up for moderation and against simplistic answers that don’t do justice to the complexity of today’s world.

"We can’t step away from it; we are entangled in the humdrum of negotiation. And that is the only way forward, painful and slow, as it might seem. So as an artist I want to try something really radical: try and work against the polarisation of opinions, try to find common ground and find what connects us, rather than what divides us. The 20% of haters in our societies have hate on their agenda, they always will. Now it’s time to make sure they don’t infect the next 20% with their bile. It may be uncool but to me, calming down, seeing the situation as it is, complex and convoluted, is the only way forward. As the famous saying (commonly attributed to Edmund Burke, and famously quoted by Kennedy) goes, ‘The only thing necessary for the triumph of evil is for good men to do nothing’. 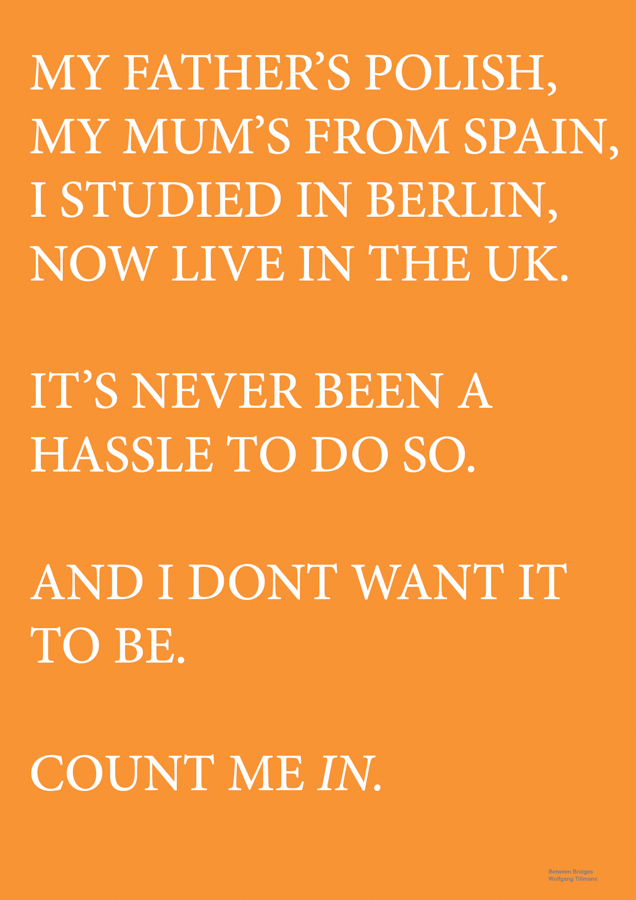 Is it more than a left versus right issue for you? " I think the issue is about ‘authoritarian’ versus ‘non-authoritarian’. It’s not about left or right. The far-left British politician George Galloway is as dangerous to me as is the far-right Nigel Farage or Nick Griffin. They are to me absolutely the same side of the coin. Anyone who finds Vladimir Putin acceptable - and there are as many on the far right as there are on the far-left who do - shows their real face. To those who have to live under authoritarian rule, like our friends in Turkey or Russia or for that matter under ISIS, the term left or right seems meaningless. British values are 100% opposed to theirs. Therefore I’d like to say that calling for Brexit, in this day and age, is truly unpatriotic." 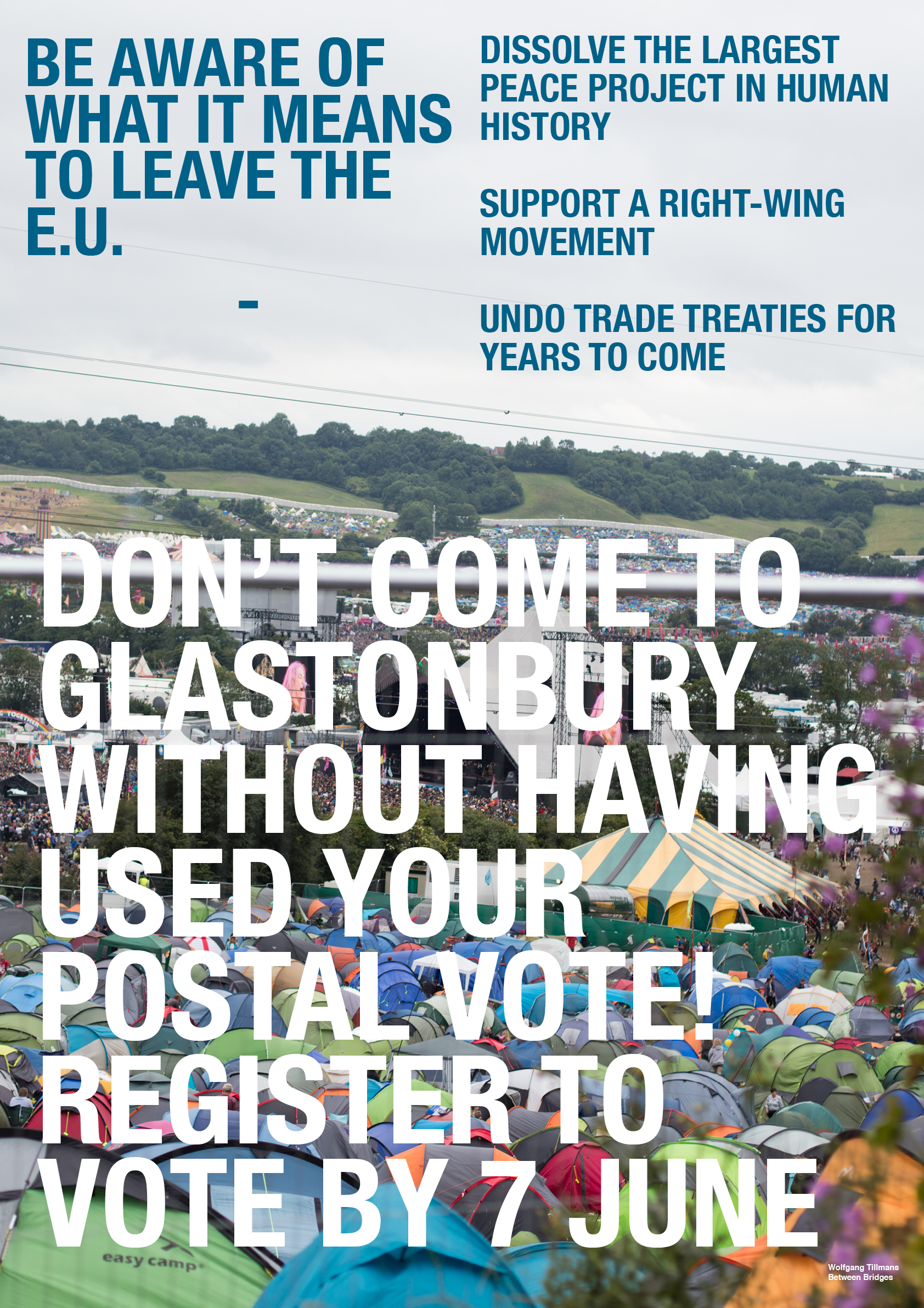 If the UK was to leave the EU what would, for you, be the worst thing that might happen? "The worst thing that might happen will not be travel bans for people wanting to party in Berlin, or holiday in Portugal. The real fall-out will be the strengthening of anti-democratic forces in Europe and around the world. The EU, for all its flaws and annoying slowness, is a force for human rights, cooperation and negotiation. Someone said to me: After centuries of bloodshed in Europe, the boring long night deals and conferences in Brussels are the price we have to pay for not shooting at each other. If the UK leaves the EU, none of that negotiation work will go away, it will become more intense. For example every UK product would have to be safety tested separately. One body is currently handling it for 28 nations. Brexit will result in more bureaucracy and red tape." 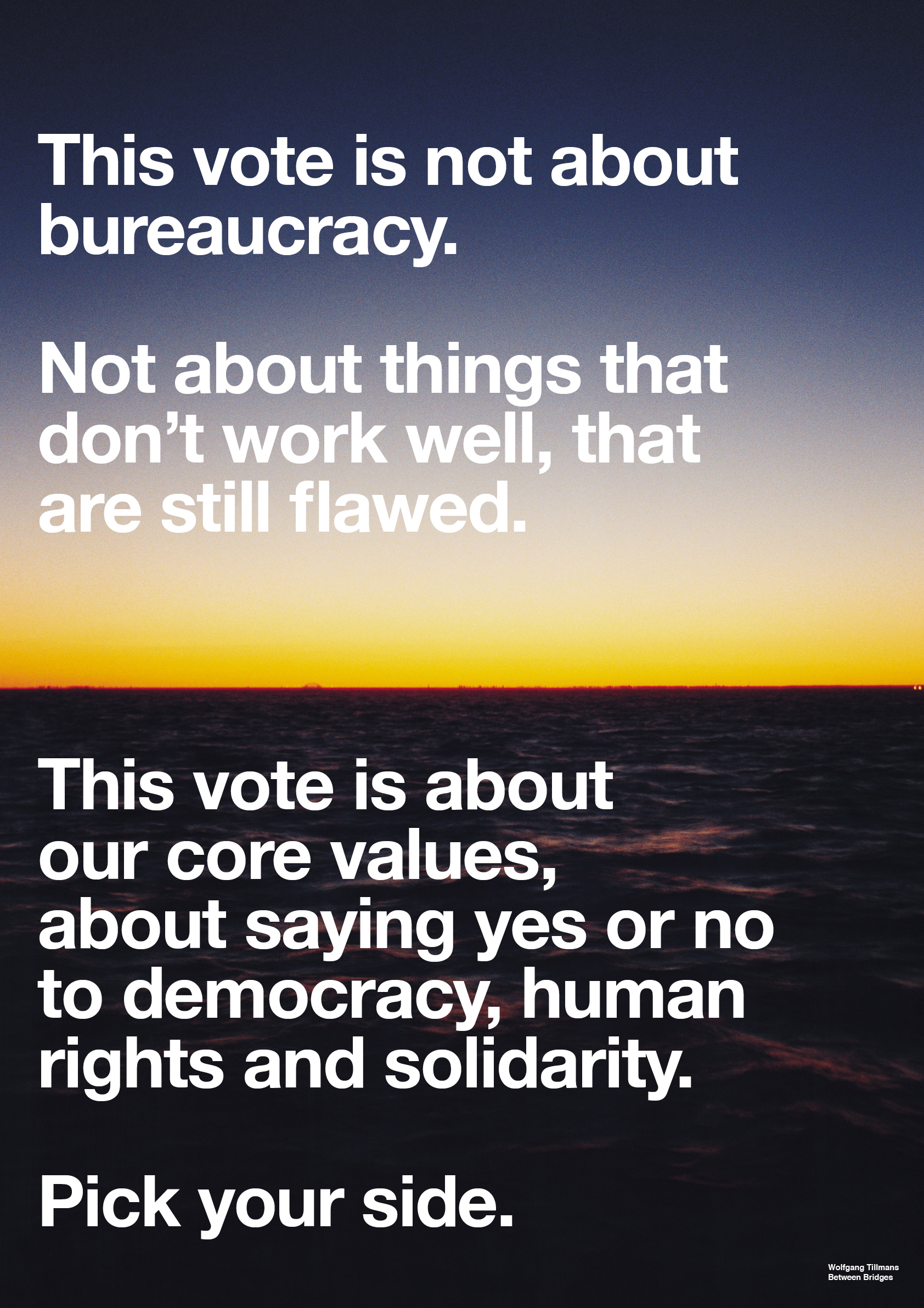 In the past few weeks Wolgang and his assistants in his London and Berlin studios and Between Bridges have been working on the texts and designs in this story. He would like you to share the posters in any way you can think of. They work as print your own PDFs, or on social media. Wolfgang considers them open-source and says "you can take my name tag off if you feel it's more appropriate" when you use them. The important thing is to spread the message so that people who want to vote are able to do so.

Download all posters as .zip for social media sharing 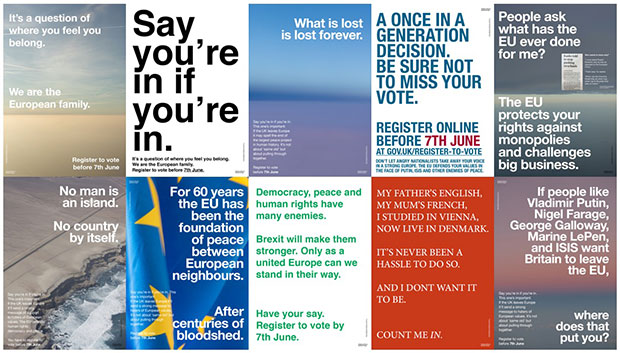 Once you’ve downloaded the posters learn more about this great pioneering artist with a social conscience via our Contemporary Artist Series book.