When Fondation Beyeler aquired his works it asked him to place them with others in its collection. But which ones?

Fondation Beyeler, near Basel in Switzerland owns and displays works by some of the finest artists of the modern era. Late, great European painters such as Paul Cezanne and Vincent Van Gogh are represented in the museum’s permanent collection, alongside works by Roy Lichtenstein, Andy Warhol and Alexander Calder.

It’s an honour for a contemporary artist to have his or her work added to this collection. Yet, hanging this work alongside such august names is a rather more daunting task. Nevertheless, the photographer and Phaidon artist Wolfgang Tillmans was flattered to have a number of his pieces added to the Beyeler and, earlier this summer, obliged when the gallery asked him to position his pieces alongside beside others on its walls.

In an accompanying video, Tillmans – speaking in German – describes both his feelings upon hearing his work had been added to Beyeler– “it’s a very special collection because it has been put together by a connoisseur with absolute assurance; I was very happy about it” – and the prospect of choosing works to go alongside his own – “the problem is that the collection is fantastic, that it could look somehow presumptuous, as if one is comparing oneself to the masters of modern art.” 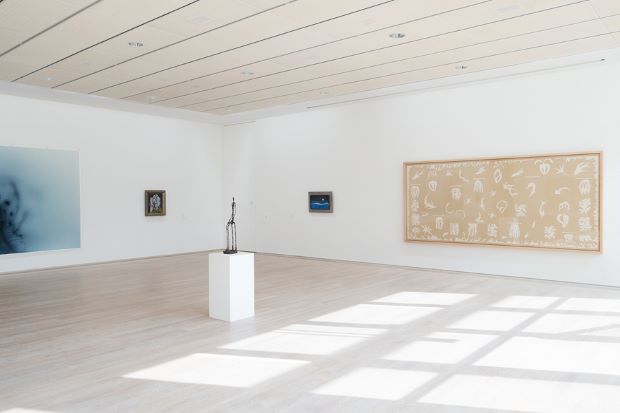 The photographer describes choosing works to accompany a pair of his own images; two large, abstract photographic images from his Freischwimmer series. The pair, dating from 2004, used to hang beside the dance floor at the infamous Berlin nightclub Berghain. Upon relocation to Basel, Tillmans ignored their hedonistic provenance, preferring to concentrate on the liminal, near figurative, yet nevertheless abstract nature of this pair. He makes such works, as he explains the video, by waving a torch-like tool over the photosensitive paper. The pictures have photographic qualities and yet do not capture the real world.

To reflect this, Tillmans chose two near abstract screen prints by Matisse - Oceania, the Sky and Oceania, the Sea, both dating from 1946/7 – a modernist seascape by Max Earnst – Humboldt Current, 1951/52 – as well as a couple of Picasso’s more distorted portraits - Bust of Woman with Hat (Dora) from 1939 and Weeping Woman 1937 – to hang alongside them.

"In the end I didn't choose any completely abstract pictures,” he said, “the Matisse stands on the edge of abstraction, and the two Picasso portraits go very well together with the suggestion of reality in my Freischswimmer. The eye understands them as photography in a way and the brain thinks photography has something to do with reality, and this creates a nice level of excitement.” 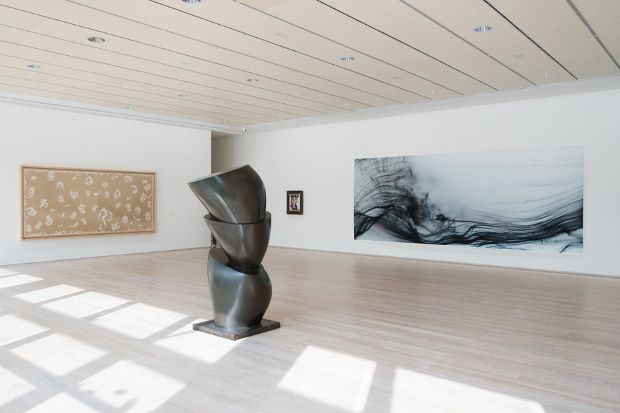 Tillmans Freischwimmer image beside works by Picasso and Matisse. Photograph by Wolfgang Tillmans.

What a disarmingly simple, and yet sensuous way to think about art? A bit like Tillmans’ own pictures, perhaps. To view the video go here; to see Wolfgang’s own shots of the installation, go here; and for a better look at his work, buy our newly updated monograph, here.