The photographer's lover Jack Fritscher recalls how, in his flowers, Mapplethorpe saw both beauty and the devil

The photographer Robert Mapplethorpe and his lover, the writer and publisher Jack Fritscher, each had a well-developed sense of what good and evil might be. Both men were raised as Catholics, in an age when homosexual sex was both a mortal sin in the eyes of the church and a criminal act in much of the United States. Both transgressed the limitations of their time, Mapplethorpe by presenting exquisitely executed photographs of plainly beautiful subjects beside scandalously erotic ones; Fritscher through his work as a writer and editor, overseeing such titles as the homosexual leather subculture magazine Drummer. Each enjoyed the sexual liberation of the 1960s and 1970s, and endured the change in mores, when the AIDS crisis, combined with a new-found prudence, sought to restrict earlier freedoms.

Mapplethorpe died in 1989, yet Fritscher, now aged 76, has lived to see his old lover's pictures find acceptance across the artistic community, and has just written this touching recollection of his time with Robert, published to coincide with both the photographer's huge LA retrospective the new HBO documentary and our book, Mapplethorpe Flora: The Complete Flowers.

In the piece, Fritscher sets out his take on Mapplethorpe's vision, writing that the photographer “laboured throughout his career to inject that sex rush, that religious feeling, that existential frisson, into his holy pictures of leather sex, black men, celebrity women and flowers as brilliant as night-blooming sex organs.”

Fritscher also recalls the good times. “It was the Titanic 1970s, when the first-class party sped on, innocent of the iceberg of Aids that lay dead ahead,” he writes. “Everyone was polyamorous.”

He also remembers the beginning of the end, when Mapplethorpe upped his work rate in response to a foreboding sense of mortality.

“Suspecting the worst, Robert sped up the quantity and quality of his work to express his soul and build a legacy of more than 120,000 pictures,” Fritscher writes. “As his healthy beauty time-lapsed fast into the stoic beauty of the dying, he did not like eyes looking back at him through the camera. So he shot flowers and statues and objects that obeyed his direction and made no demands.”

Yet it wasn't just the practicality of flower photography that attracted Mapplethorpe to the subject. A casual onlooker might see his black-and-white lilies, orchids and tulips as a kind of visual palette cleanser, placed inbetween the earthier subjects. However, Fritscher believes these stems, stamens and petals, the plant kingdom's fragile sex organs, capture both sides of Mapplethorpe's nature. 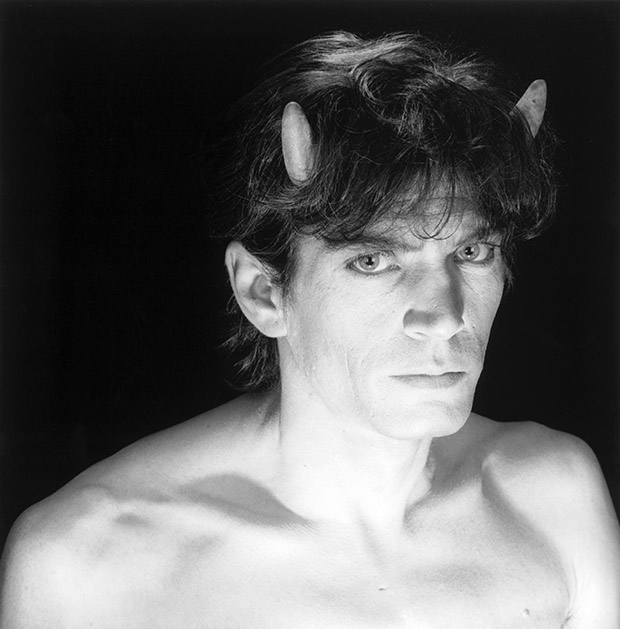 Robert Mapplethorpe, self portrait with horns, 1985

“On 21 May 1978, as he was shooting photos of himself as both Satyr and Satan with horns on his head, to illustrate a leather-bound edition of Rimbaud’s A Season in Hell, he wrote: “I want to see the devil in us all. That’s my real turn-on.” It was a private remark that echoed what Robert once said about his flower photos: “Beauty and the devil are the same thing.”

You can read the full piece here, and for greater insight into this important photographer's beautiful floral work get  Mapplethorpe Flora: The Complete Flowers.