When the Berlin-based progressive design network, DMY took charge of this year's Design Award of the Federal Republic of Germany, some change was expected. Previously overseen by Frankfurt's German Design Council, the award was perceived by many to be an industry gong, given out to big companies for this or that year's flagship model; it wasn't unusual for a fairly straightforward BMW or Mercedes saloon car to scoop the top prize.

Joerg Suermann, head of DMY, has promised to change this, by placing greater emphasis on young designers and product innovation, regardless of any big marques. However, he's also called on German designers to overcome certain national stereotypes.

"German design is very functional, very minimal, but the world is moving," Suermann told Dezeen earlier this week. "To be successful in the future we have to think about what will happen in the future, what is necessary for the future."

Suermann believes that this change will come from Germany's young designers, who are already hungry for novelty. "I think it's important to give them [the young generation] the visibility and to show off to the international [community] that we have not only Bauhaus, not only Ulm, that a lot of new things are happening." 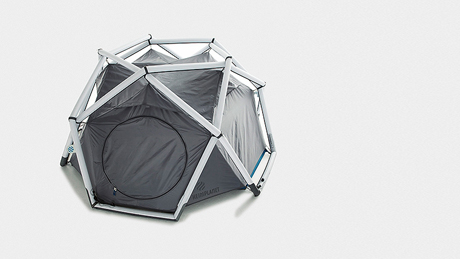 So, does the shortlist reflect Suermann minimalist aversion? Well, there are still plenty of German cars, and sleek unadorned shelves, desk and bureaus in the running. However, we were quite taken with the Rapid Racer, a automobile powered by a cordless drill, and produced using 3-D printing technology; and The Cave, an inflatable geodesic dome tent. Will contemporary innovation win out over traditional Teutonic minimalism? Find out on 25 October, when the winners are announced.

More on Do the Germans need to get over minimalism?