We aren’t regular visitors to Cupertino City’s YouTube channel. Yet we did take a look this week, thanks to a tip from Dezeen, as the small Californian municipality has just granted planning permission for Apple’s new Foster-designed corporate campus. 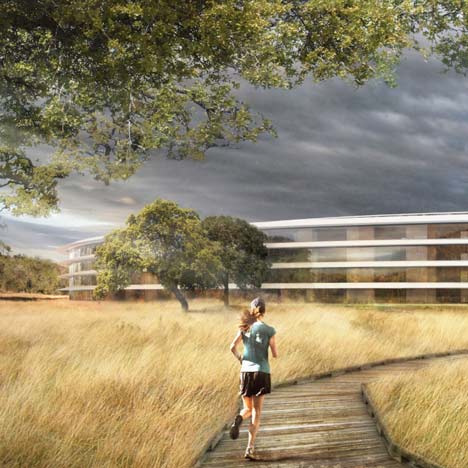 The new Apple Campus design, by Foster and Partners

With its bespoke glass, polished terrazzo flooring and ambition to be an entirely carbon neutral site, the doughnut shaped building is already being described as the greatest office space in the world, before it has even broken ground. Jonathon Porrit, whose new book The World We Made envisages (among other things) such offices of the future, would doubtless be impressed.

In the video (above) uploaded to the Cupertino City Council’s channel earlier this week, Foster describes Jobs' commissioning process. The architect says that in the summer of 2009 he received an unexpected telephone call.  “It’s Steve,” he says “’Hi Norman, I need some help.’ I was out three weeks later.”

Foster sounds impressed by the late CEO’s working practices. “One of the most memorable things and perhaps vital to the project was Steve saying ‘don’t think of me as your client, think of me as one of your team.’” Foster recalls.

The new Apple Campus design, by Foster and Partners

The architect also offers a little insight into Jobs’ brief. “The first point of reference for Steve was the campus at Stanford,” he says, “and the landscape he grew up with. He still remembered it as  the fruit bowl of America” - a reminder that Jobs, who grew up in Northern California, was a silicon valley native, before the advent of the microchip. Perhaps this accounts for the incredible amount of green space included in this new plan. Find out more by going here.

For greater insight into contemporary architecture around the world, buy our new app, the Phaidon Architecture Travel Guide. It’s available now for the iPad, iPhone and iPod touch. Meanwhile, for a greater understanding of Apple, do take a look at our Dieter Rams book. Jonathan Ive wrote the introduction. Buy both, from the people who made them, here.