In our book Art Cities of the Future 21st Century Avant-Gardes the writer Pablo Leon de la Barra points out that “it’s impossible to write about Puerto Rico’s contemporary art scene without recognizing the immense contribution of Michy Marxuach, who has been the driving force behind the island’s avant-garde, especially in rethinking real possibilities for art’s impact.”

In the early 2000s Marxuach created and directed M&M Proyectos, artist studios and residences in a former department store in Old San Juan. As part of M&M Proyectos, she developed the Puerto Rico 2000, 2002 and Puerto Rico 2004 biennials which sought new ways for artists to engage with the local context. As Art Cities points out, “by establishing a network among participating artists, the PR biennials helped to break down local artistic isolation, not only through international exposure, but also by making the younger generation aware of its potential to develop projects despite infrastructural limitations.” 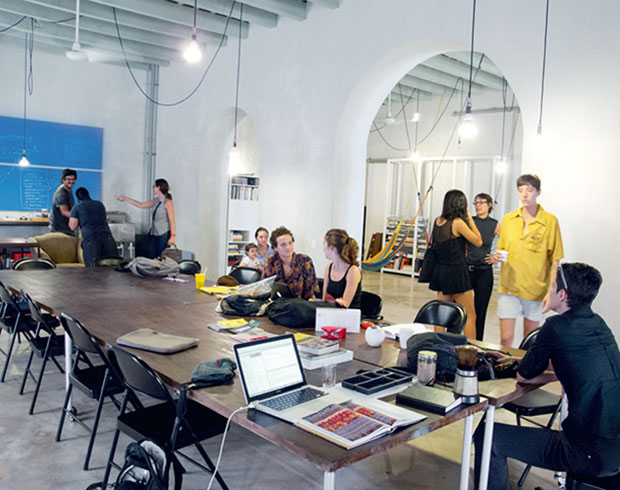 After the biennials, Marxuach briefly retired from the scene, but returned in 2009 to launch the nonprofit organization Beta-Local with artists Beatrice Santiago Munoz and Tony Cruz Pabon. Beta-Local emphasizes the development and exchange of knowledge through a series of initiatives: a study and production programme that functions as a postgraduate alternative to emigration abroad; a residency program for international artists, curators and other cultural practitioners; an experimental school open to the general public; and a reference library of art and design resources.

As part of its study programme, Beta-Local has been instrumental in supporting the development of the island’s next generation of artists, including Alana Iturralde, Michelle Gratacos-Arill and Joel ‘Yoyo’ Rodriguez. All of which is an introduction to the news that our friends at the New Art Dealers Alliance (NADA) are hosting an event this Friday (February 14) in San Juan as part of their NADA con member conference this weekend. 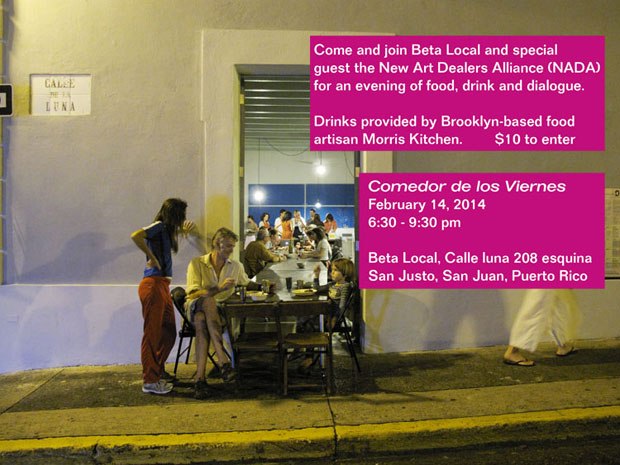 The program, El Comedor de los Viernes is a monthly event. The ‘dialogue’ is not a formal lecture but more about the community coming together - Beta-Local celebrating their programs and artists, and in this specific case the NADA group interacting and meeting Beta-Local’s community. There will be food and drinks provided by independent Brooklyn-based food artisan Morris Kitchen for some cross cultural interaction. If you’d like to go it takes place between 6.30 and 9.30 at Beta-Local, Calle Luna 208 esquina San Justo, San Juan, Puerto Rico, or you can just find out more about it here.

More on Come to NADA and Beta-Local's event this Friday