In 1994, VII photographer Ron Haviv joined Nelson Mandela on the election trail in the black African homeland of Transkei, where the picture above was taken. There will be many words written on the great man's passing today. We think Haviv's pictures - two of many of the African leader featured in Questions Without Answers - are a perfect visual representation of an extraordinary, epoch-making life. RIP Nelson Mandela. 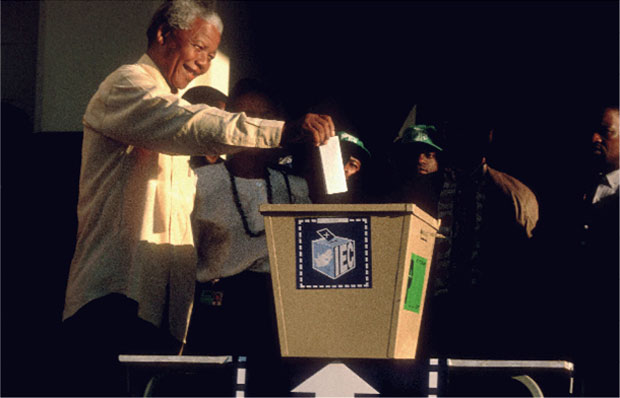 Questions Without Answers VII, with an introduction by David Friend

This major work presents a remarkable sequence of photo-stories from pioneering photo agency VII, documenting world history as we have experienced it since the end of the Cold War. The 11 extraordinarily talented photographers who are part of this agency work at the cutting edge of digital photojournalism, committed to recording social and cultural change as it happens around the world. Each brings an individual vision to the agency - some choosing to tackle dramatic events head-on, others pursuing more idiosyncratic, personal projects - but all share a commitment to their individual subjects and to their belief that the act of communication provides hope even in the most extreme situations.

Questions Without Answers is an ambitious book featuring a strikingly broad selection of photo stories. Photos documenting Barack Obama giving a speech on Afghanistan to American troops sit alongside a collection of portraits featuring famous cultural figures such as David Bowie and Bernardo Bertolucci. We move from an exploration of the spread and impact of AIDS in Asia to dispatches from the current economic crisis and its effect on those working in finance. The crucial work done by VII in documenting conflict - environmental, social and political, both violent and non-violent - is also represented, including stories from the war in Iraq, the crisis in Darfur and the terrible events of 9/11.

With an introduction by the eminent David Friend, the former director of photography at Life magazine, this book is an important, moving and compelling record of the world we live in. Specifications: