Last week the 31-year-old American war photographer and Magnum Photos member Peter van Agtmael was awarded the W. Eugene Smith Memorial Fund Grant for Humanistic Photography. We caught up with him to discuss his Iraq and Afghanistan war series, Disco Night September 11, embedded reporting versus unilateral conflict coverage, if he sees himself as a reporter or an artist, and find out whether he's ever staged a shot.

You were born in Washington DC. Were you familiar with the workings of government from early on?  Government is everywhere in DC. Friends of my family are involved in the power structure as well as some parents of friends when I was growing up. Currently, one of my closest friends is a federal prosecutor in DC and another recently finished work advising for a senator. I've come away from Washington feeling that the wielding of power is an essential but terrifying thing. Helping check the excesses and inadequacies of power was one of my main motivations in becoming a journalist. I was 20 when the 9/11 attacks occurred and 22 during the invasion of Iraq.  About a year before 9/11, I decided I wanted to photograph in conflict zones. Those momentous events just crystallised the decision, and gave it direction. Still, it took a few years to prepare myself to go. It wasn't a decision I rushed. I was scared. When I went, I was ready. 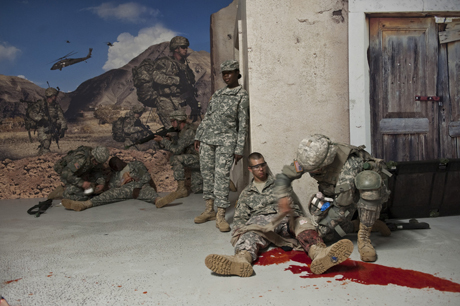 You've shot images both while embedded with troops and independently of coalition troops. How do the two experiences differ? Embedding is like being in bizarro America. You speak English, eat American food, live with other Americans... And when you go outside the wire you are suddenly in a very different reality. There is a lot of tension and suspicion, and often the looming threat of attack. Being unilateral requires a different set of precautions, but it's more human. Most Iraqis and Afghans appreciate a curious stranger traveling outside the umbrella of the military, and they are usually welcoming, open and protective. The next stage of my project will be fully unilateral. 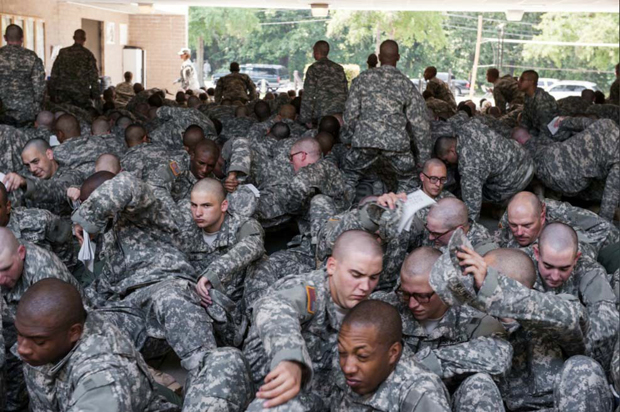 Fort Jackson military base, Sept 2011. New recruits prepare to board a bus to their barracks.

Why did you entitle this war reportage project Disco Night September 11? The title came from a sign I photographed in Hopewell Junction, NY in 2010. I was a few weeks back from a trip to Iraq. I was feeling a little detached, as I often feel when returning from war zones. To me, the sign symbolized how quickly these wars have faded from the collective consciousness. Meanwhile, they grind on and have permanently altered the lives of millions. That burden is on all of us, yet mostly we refuse to acknowledge it. We are a dangerous country at times. We can be easily seduced by war, and we just as easily forget about it when it comes too close to threatening our distorted sense of national identity. I love America but it scares the hell out of me. 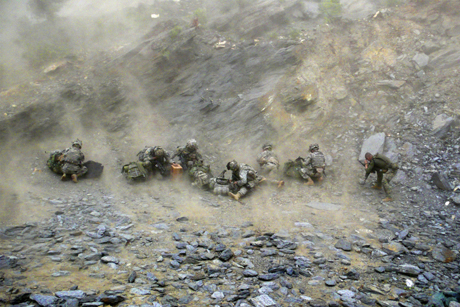 Nuristan, Afghanistan, 2007. A helicopter comes to land on an impromptu helipad built into the side of the mountain at the outpost of Aranas

In your supporting statement for the W Eugene Smith Grant, you said your coverage of the Iraqi and Afghanistan wars will become your life's work. When did you realise this was the case? I think I've realised it slowly over time. The deeper I go into the subject, the deeper I want to go. I've explored a lot of other things but they haven't hooked me in the same way. Still, I like to explore different subjects and places as much as possible. I try to balance my need to cover these wars with the realities of living an emotionally healthy existence. For a while I was in too deep, and that just wasn't sustainable.

You also wrote that "it is tremendously rare and difficult to get magazines to fund intimate stories that look at the civilian side of conflicts". Is this a recent development, or has it always been difficult? I don't really know. I haven't been working professionally for long enough to say. There was more money and fewer photographers a few decades ago, but I think quiet little stories are never an easy sell. Most major publications are reflections of society. Society wants to read uplifting stories about itself, and has a short attention span. Also, as a democracy, these now-unpopular wars incriminate all of us. I think that this critical point is sub-consciously understood. Unfortunately, most people have absolved themselves of responsibility. They slap a 'support the troops' sticker on their car (or they used to, even that has faded away) and go about their day. Eleven years into war there isn't much desire left for dealing with painful truths. I think it will become important again in a few decades, when we are ready to reckon with it as a nation. At least that's what happened after Vietnam." 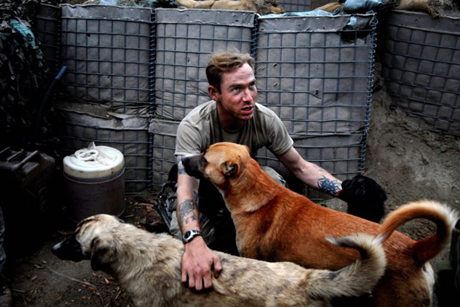 You've joined Magnum at an interesting phase in the photo agency's development. Is it a news service, fine art coop, or documentarians' collective? How do you see it? And what do you think of newer agencies such as VII? Magnum is all of those things, as it has always been. The strength of Magnum is that it provides a home to a wide range of photographic expression. I think VII is a great agency. I admire their work tremendously, and have some good friends amongst the members. I'm a big supporter of independent agencies. It's unfortunate that there is far more talent out there than money for serious work. Maybe I should find a better way to boil an egg so I can make millions. Man, that guy that invented the blanket with sleeves was a genius. I think he just put on a bathrobe on backwards one day, rebranded it, and has now probably retired to Acapulco.

How does what you do differ from the work of say, James Nachtwey? Do you sometimes hold back from filing gruesome images, since they may prove unpalatable to a newspaper reading public? I think Nachtwey is more drawn to capturing iconic images. His pictures are often tragic, and at their best stand as the decisive visual memory of a place and time. My pictures are generally more pulled back, and I'm primarily interested in building a feeling and narrative over the course of a large sequence of pictures. We are very different photographers but I have profound admiration for his work. He's one of the reasons I became a photographer. And I'm not sure how open-minded these readers are if they can't reckon with the consequences of their actions. I suspect editorial decisions have more to do with advertisers than they do with readership, anyhow. Personally, I send whatever I feel is right, although I realise that it's almost impossible to get brutal images in mainstream publications, especially if they are violent pictures of dying Americans. Sometimes I fight editorial decisions. Occasionally I'm successful.

Though you've focused on American wars in Iraq and Afghanistan, you're also shooting inner city America - cities that aren't doing very well (Detroit, Miami, New Orleans). Is this part of 'Disco Night Sept 11', or a different project? That work is from a different project about America that I've been working on for the past four years. It was born out my experiences at war, and my personal need to understand America a little better. I photograph in cities but also in the suburbs and country. I'm photographing all social classes and races. Sometimes the photos are intimate, sometimes they are fleeting encounters. I'm happy with the progress of the work, but there's much more to be done. America is endlessly fascinating.

Luc Delahaye now regards himself as a fine-art photographer, rather than a photojournalist. Is this an important distinction? Is it a jump you see yourself making? I think there is so much overlap with these labels that they are mostly rendered meaningless. They serve the market more than they act as a descriptor. As for myself, I take photos of the things I'm interested in. The more people that relate to them, the better. I'm not targeting any niche. Incidentally, I think Luc is a brilliant photographer, regardless of how he is labelled.

Certain well-known war photographs were altered or staged to some degree. Have you ever staged a shot? Is it possible to tell a greater truth while discarding inconvenient aspects of a scene? Photographs are not absolute truths. So-called reality can be misleading, and fiction can be incredibly revealing. I think a code of ethics is important and often essential for institutions, but for myself I try and work without rules. 99% of the time I photograph things as I witness them.  That's just how I prefer to work at this point in time. Sometimes I shoot posed portraits and I'm completely open to the idea of constructing scenes as long as the final result is labeled as such if it's being used in a journalistic context. These standards exist for important reasons, but there are many valid forms of expression. As long as you're being honest, I think anything goes.