What sort of art does a 27-year-old Seattle billionaire and S&M enthusiast like? According to the new 50 Shades of Grey movie, it's Ed Ruscha. A work by the American pop artist appears at around the 25 second point in the trailer for the film adaptation. You can see what appears to be a Ruscha painting of two 17th-century style tall ships, listing on the ocean scene, on the wall of Christian Grey's office when Anastasia Steele first meets the 27-year-old businessman. 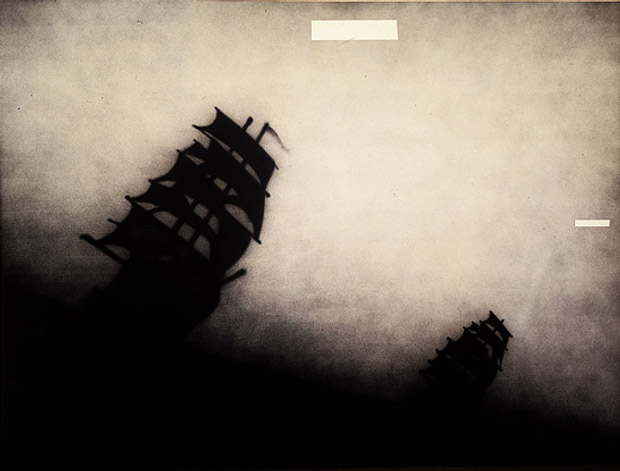 Ruscha produced a series of these works during the late 1980s, airbrushing the sailing vessels in shady, monochromatic style befitting the film's title. Which painting is it, exactly? Well, the LA Times Christopher Knight believes the work in question could be Brother, Sister (1987), or at least a movie-prop version of it. If so, its a fitting choice for a rich entrepreneur; that particular piece forms part of the Swiss bank UBS's contemporary art collection, while another work in Ruscha's tall ship series sold for $1,777,000 at Christie's in New York in 2007.

The canvas caught on camera is most likely a real Ruscha. As this recent Vanity Fair article reveals, the director and erstwhile Young British Artist Sam Taylor-Johnson personally assembled the fictional billionaire's art collection for the film, pulling in works by Ruscha, alongside pieces by John Baldessari, Harland Miller, and Jake and Dinos Chapman. Production designer David Wasco explains in the same piece, “the quality of Christian’s art collection was very important to Sam, as it had to reflect his status, his connoisseurship, and his youth.”

So, if you needed an excuse to catch this film adaptation of the internationally successful bonkbuster, opening this Valentine's Day weekend, you could conceivably say "I'm going for the art" (and maybe people will believe you). But to learn more about Ruscha and his place within 20th century art, you should consider our authoritative monograph. Finally, if you're considering dipping your toes into the world of art collecting, you should start by picking up a copy of Collecting Art for Love, Money and More.

More on Is that an Ed Ruscha in 50 Shades of Grey?