Does this new set of paintings signal the end of the great American painter's love of the open road?

Ed Ruscha’s love of the American road predates the country’s Freeways. As the American curator Richard D Marshall wrote in our monograph, Ruscha moved from Oklahoma to LA in 1956, before the US's current national road network was built, and even painted the famous route that brought him to California.

“The first allusion to the American gas station in Ruscha’s work appears in US 66 (1960), with the name of the famed American highway submerged in expressionistic brushwork,” Marshall wrote.  “Before the advent of the interstate freeway system, US 66 was one of the main routes to the West Coast, and Ruscha would travel this road frequently between Los Angeles and his former home in Oklahoma City in the early 1960s.”

Ruscha, who celebrates his 77th birthday next month, has sustained this interest in car culture, shooting of every building on Sunset Strip, photographing and painting gas stations, and even producing his own edition of Jack Kerouac’s 1957 novel, On The Road.

Yet is Ed losing his love of life behind the wheel? That seems to be the implication of a new set of paintings going on show at the Gagosian in Rome tomorrow. The gallery describes these works as “complex pictures that conflate his signature elements with the visual devices, perspectival techniques, and refined atmospheres of Old Master paintings to depict the romantic road trip of youth reduced to roadside dystopia.” 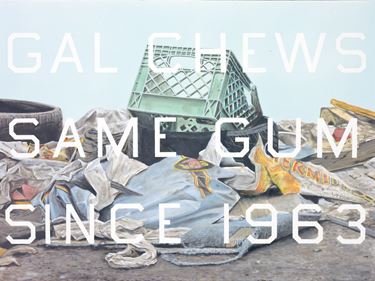 Gallery goers should look out for works such as Gators, wherein Ruscha paints life-sized images of tire fragments that look like scraps of some deformed reptile. There’s also Psycho Spaghetti Western #14, from a series that Ruscha began work on in 2010; these enlarge roadside detritus to a monumental scale, turning abandoned sofas and air-conditioning boxes into totems of decline; and there are also a few of his signature word paintings, such as the slightly ungrammatical, but fairly straightfoward Inner-City Make Scream (2014).

Honey, I Twisted Through More Damn Traffic (2014) by Ed Ruscha

Of course, this isn’t the first time Ruscha has dwelt on the downside of car culture. A 1977 pastel drawing, Honey, I Twisted Through More Damn Traffic Today, was repainted beside the High Line earlier this year. However, with this latest show, does it really seem likely that Ed could ever return to those early, unalloyed delights of the open road? For a richer understanding of this important contemporary artist and for some possible clues as to where he miht go next, buy a copy of our monograph.