In the West we tend to think of the late 1960s and early 1970s as a period of sexual freedom, genre-defining rock music and progressive politics, but in China the collective, common experience was quite different.

On this day (16 May) in 1966, during an extended politburo meeting in Beijing, the Chinese Communist Party, believing "representatives of the bourgeoisie" had infiltrated their ranks, set about purging all remnants of traditional and capitalist life from the entire country. Intellectuals, and those favouring western governments were singled out for persecution, yet the country’s Red Guards implemented Mao’s extreme class purge within almost every level of society.

Known today as The Cultural Revolution, this period of upheaval lasted until Chairman Mao's death in 1976 and left an indelible mark on the country’s artists, as can be seen in The Chinese Art Book. 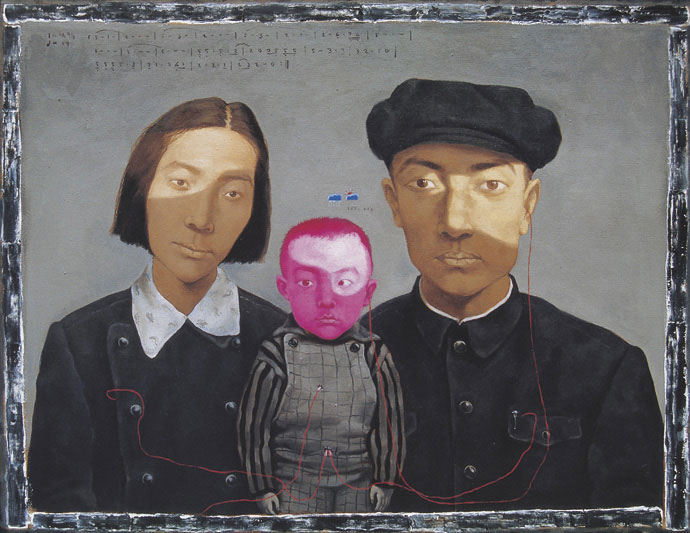 Bloodline: Big Family (1993) by Zhang Xiaogang. As reproduced in The Chinese Art Book

Bloodline: Big Family (1993) by Zhang Xiaogang Zhang Xiaogang’s haunting surrealist works were not produced during the Cultural Revolution, yet they all relate back to that period’s social upheaval. “A family pose in half shadow, a patch of fractured light falling on to their faces,” explains The Chinese Art Book. “Exaggeratedly large, their heads create a strong psychological effect, simultaneously confirmed by the sitters’ shared enigmatic expressions. The pink-faced infant infuses a magical realism into the scene, imbuing the picture with an uneasy emotionality and symbolism, emphasized by two tiny clouds with rain and sun that hang over the boy’s head. The implicit bond of the three is made clear by the thin red ‘bloodlines’ that literally connect the family while at the same time distancing them from the viewer, as though all three people possess a secret.

“This painting is an early example of Zhang’s Big Family series. Born in 1958 Zhang, known for his exquisite technique and distinct imagery, touches on themes of memory and collective experience. His paintings draw on a period dominated by Maoist ideology. Based on family photographs dating back to the Cultural Revolution, this series became highly sought after, making him one of the most successful artists of his generation.” 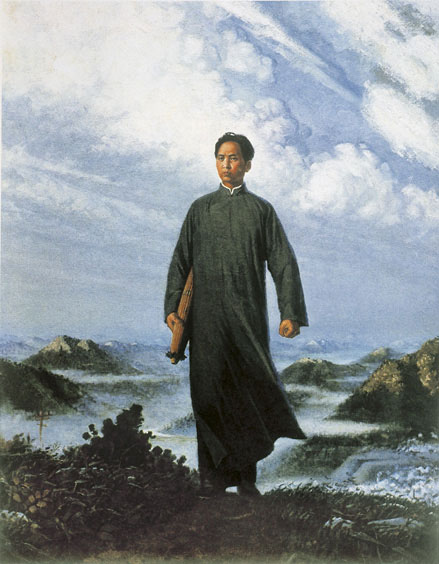 Chairman Mao Goes to Anyuan, (1967) by Liu Chunhua. As reproduced in The Chinese Art Book

Chairman Mao Goes to Anyuan, (1967) by Liu Chunhua “In this iconic painting, a young Mao Zedong, the renowned leader of the Chinese Communist Party, makes an epic journey against a misty, mountainous landscape under a blue, cloud-sprayed sky,” explains The Chinese Art Book. “Mao is shown in mid-stride, his plain robe blowing in the wind, one hand clenched into a fist and with an umbrella under his right arm. Such details signify Mao as an intrepid visionary, whose journey to Anyuan exemplified his role as a great revolutionary, leading China out of the old world of feudalism and poverty towards a bright new future. Anyuan was the site of a 1922 miners strike in Jiangxi Province, to which Mao famously travelled in order to support the miners’ cause and organize workers’ rights shortly after the founding of the Chinese Communist Party. Created when Liu was still a student at the Central Academy of Applied Arts, the painting was promoted by Mao’s wife, Jiang Qing, as a model of the artistic fusion between Socialist realism and revolutionary romanticism. Printed on 900 million posters during the Cultural Revolution, it remains the most reproduced painting in history.” 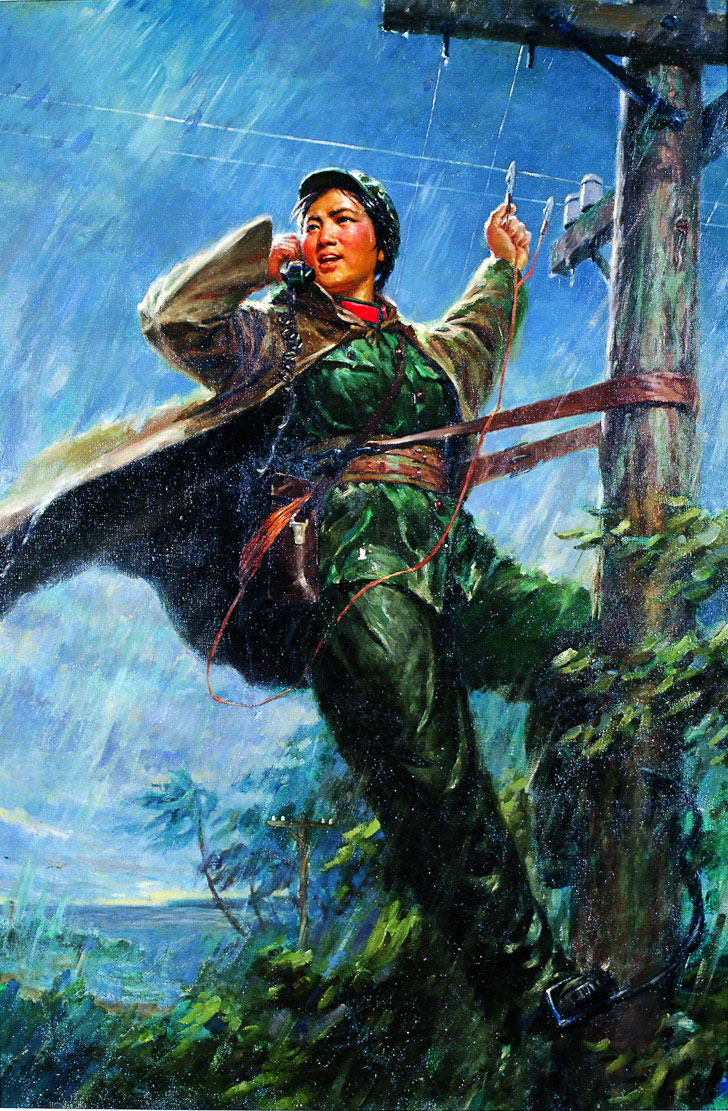 I Am Seagull (1971) by Pan Jiajun. As reproduced in The Chinese Art Book

I Am Seagull (1971) by Pan Jiajun “A woman dressed in army uniform takes a call in stormy weather, suspended high up on the telegraph pole that she is testing,” explains The Chinese Art Book. “The scene is of a coastal area, with a glimpse of the sea receding in the background. Made for propaganda purposes, this classic painting sits within the Socialist realist tradition first established in China during the 1950s. Women were a popular subject in the early 1970s, following the more strident images of political propaganda produced at the outset of the Cultural Revolution.” 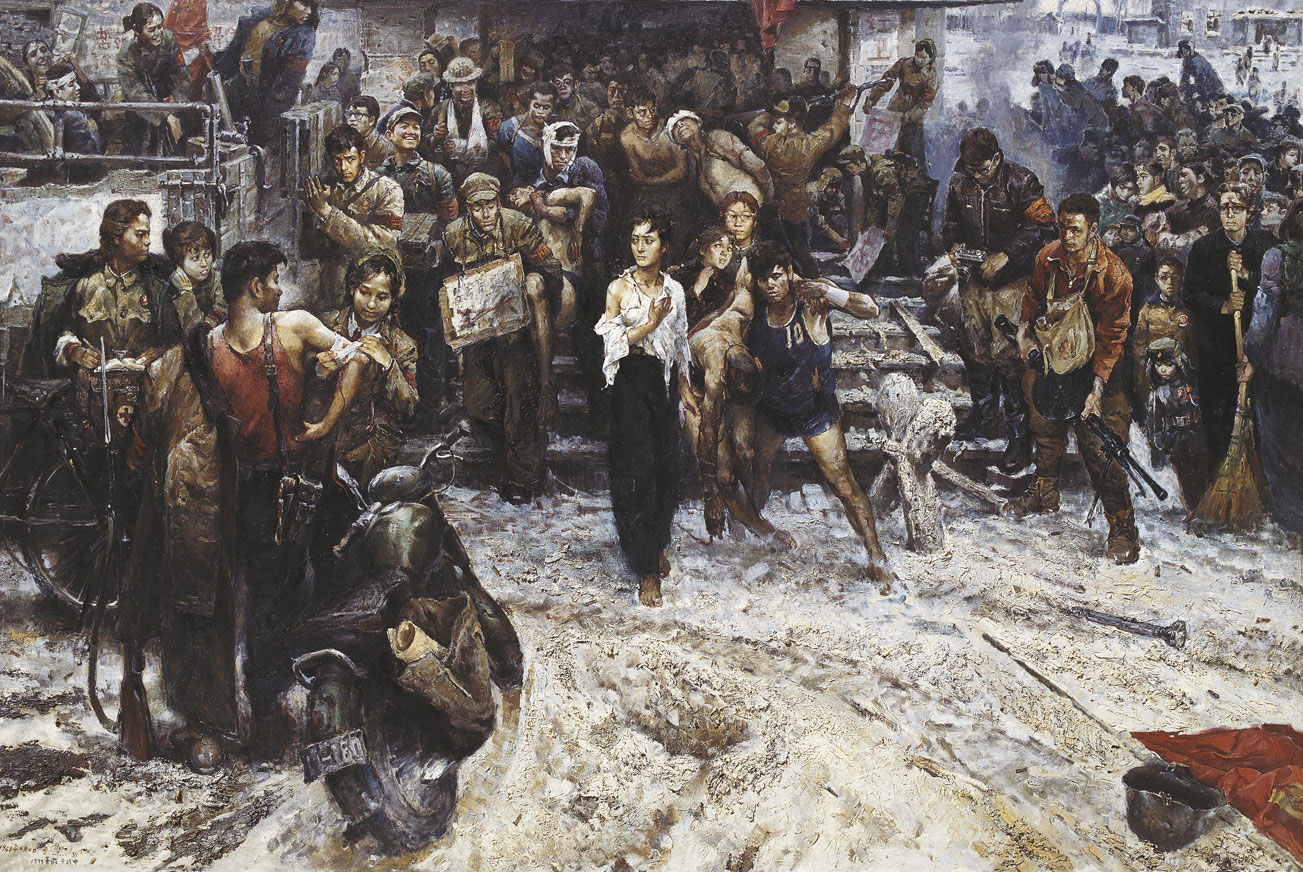 Snowy Day in a Certain Month in 1968 (1979) Cheng Conglin. As reproduced in The Chinese Art Book

Snowy Day in a Certain Month in 1968 (1979) Cheng Conglin “This dramatic scene depicts the aftermath of a fight between Red Guard factions during the Cultural Revolution,” explains The Chinese Art Book. “Set in winter in front of an offcial building, the dirty snow reinforces the squalid situation. A girl with a ripped white shirt stands at the centre of a bleak scene amid a crowd of onlookers, staring accusingly in the direction of a young man in army uniform.

“To her right, another figure, half naked, is being carried out, having been badly injured in the attack. A soldier with a placard around his neck is accused of being a ‘black element’. Painted in the style of socialist realist history paintings and contrasting with the red, bright and shining aesthetic of Cultural Revolution art, the work was made in the brief period of ‘Scar art’, three years after Mao’s death, when the crimes of the Cultural Revolution became the subject of paintings leading up to the reform period.” 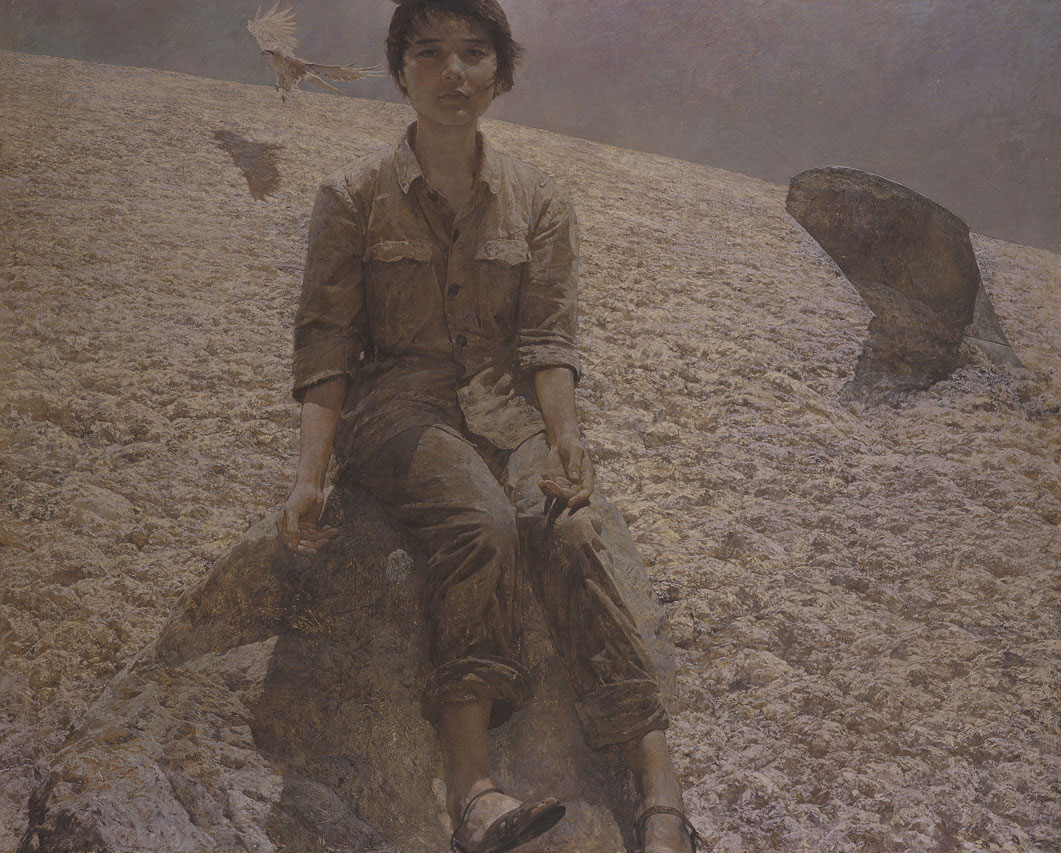 Youth (1984) by He Duoling. As reproduced in The Chinese Art Book

Youth (1984) by He Duoling “This painting of a ‘lost youth’ depicts one of China’s millions of urban students sent to the countryside during the Cultural Revolution,” explains The Chinese Art Book. “The painting, made in the genre of rustic realism, can be understood within the rise of humanism as a subject in art and literature during the 1980s, in response to the experience of living in the countryside during the ‘sent-down’ movement of 1968 and its effect of estrangement on a whole generation. With sunlight flooding on to the field, the girl is depicted with clarity, yet she appears in a daze. It is a scene of surreal intensity. A white bird of prey casts a shadow, and a rock cutting into the composition on the right appears as an alien object, half attached, half floating.

“He Duoling is a painter from Sichuan Province, where this genre of lyrical realist painting was particularly strong. The work shows a clear influence of the American modern painter Andrew Wyeth in its composition and meticulous attention to detail.” 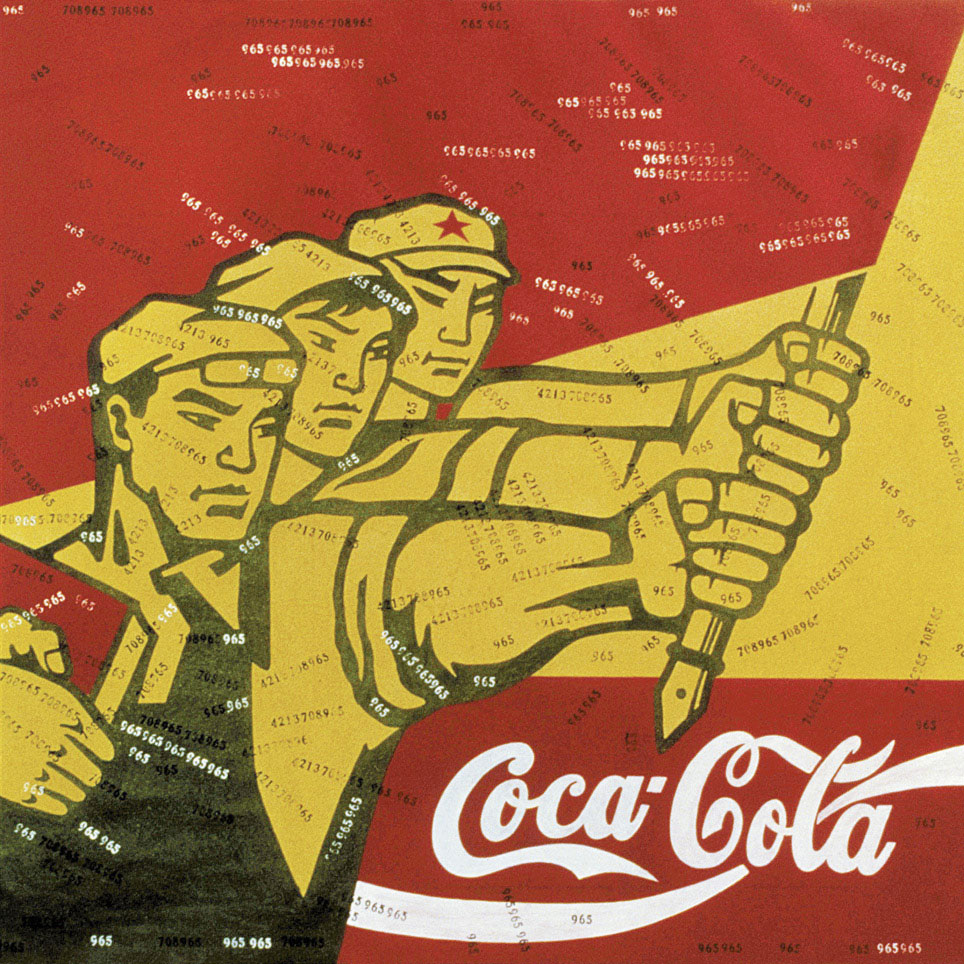 Great Criticism Series: Coca Cola (1988) by Wang Guangyi “A prime example of the Chinese Political Pop movement, this artwork became one of the most widely disseminated images of Chinese contemporary art,” explains The Chinese Art Book. “Brightly coloured, it fuses a style typical of propaganda during the Cultural Revolution with the Coca Cola brand. Clearly recognizable, such a ‘capitalist’ icon jars with the communist archetypes of the worker, soldier and peasant in revolutionary pose, removing the figures from their original context and transforming the symbolism into a critical piece of art.” 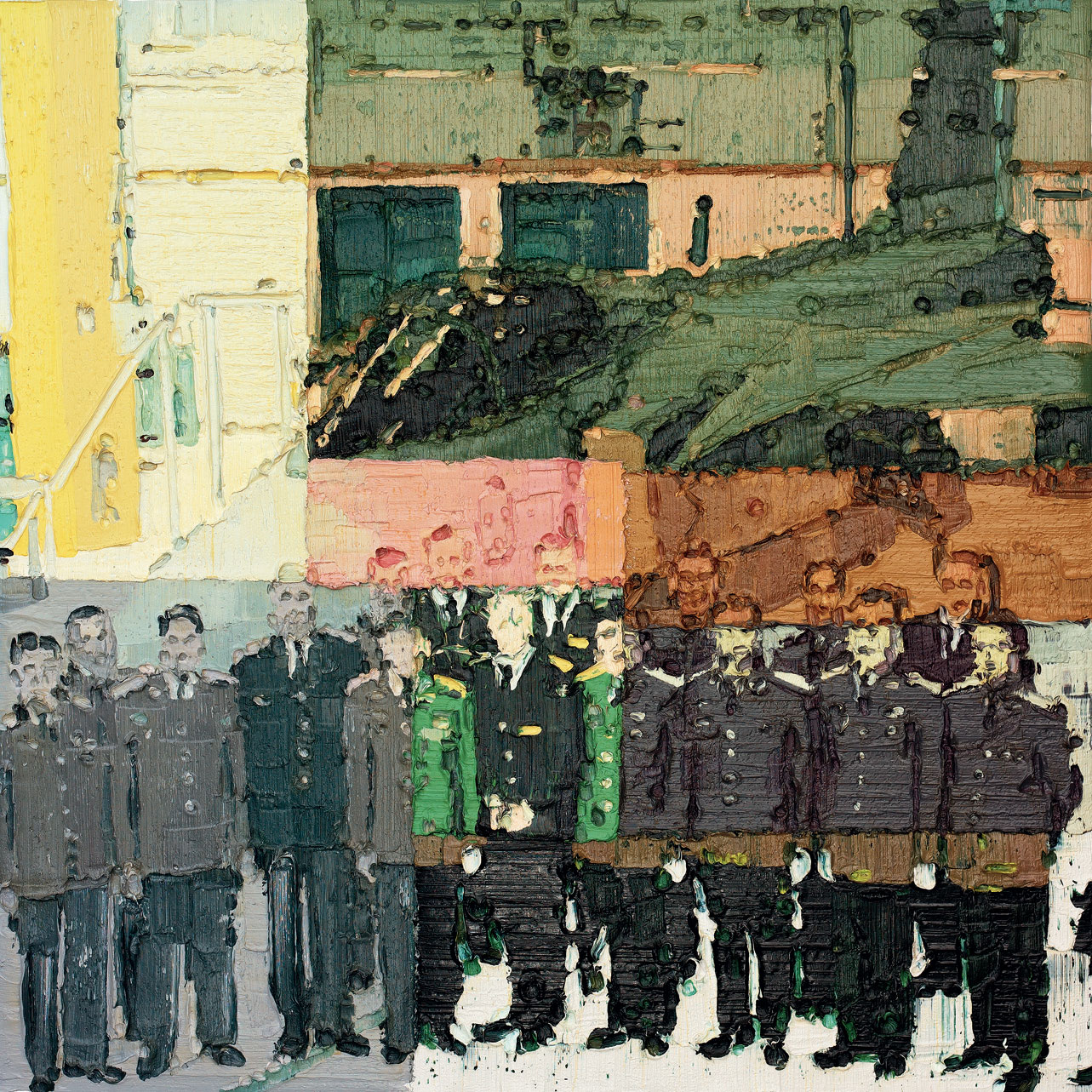 Chinese Military Mission at the SAAB AB Factory, (2009) Li Songsong “A group of military personnel stand lined up in front of a green fighter jet, their semi-abstracted figures merging into the background. Heavily textured, the painting is arranged in rectangular patches of colour that divide the composition, recalling the Cubist techniques of Picasso and Braque.

"Li Songsong is a painter of the ‘between generation’, born after the Cultural Revolution but before China’s one-child policy. He takes photographs and images from books, newspapers and the Internet, tearing them into pieces before employing heavy impasto techniques to create a thick painterly surface marked with scrapes and pokes, layering the image with a pallet of yellow, pink, brown and green. His works convey the piecing together of historical events through memory and visual perception, giving a sense of subjective recall over historical fact.”

More on Art inspired by the Cultural Revolution