Warhol, Picasso and Richter outsold Chinese artists last year but can they do the same again this?

This time last year, Chinese artists appeared to have outstripped their western counterparts in auction house sales. In 2011 the 1940s painting, Eagle on a Pine Tree by Qi Baishi (1864-1957) sold for $65.5m, making it the most expensive painting sold at auction that year.

Meanwhile, Zhang Daqian (1899-1983) became, by some estimates, the best selling artist of 2011, generating $506.7 million in auction revenue. While neither are especially well known in Western art circles, both painters backed these big prices up with serious artistic credentials. Zhang mastered both traditional East Asian painting techniques, as well as more modern and impressionistic styles. Qi, meanwhile, was held in equally high regard for his brushed renderings of the natural world, popular with the country's elite. Eagle on a Pine Tree was originally painted as a sixtieth birthday present for Chiang Kai-shek, the Chinese Nationalist leader. 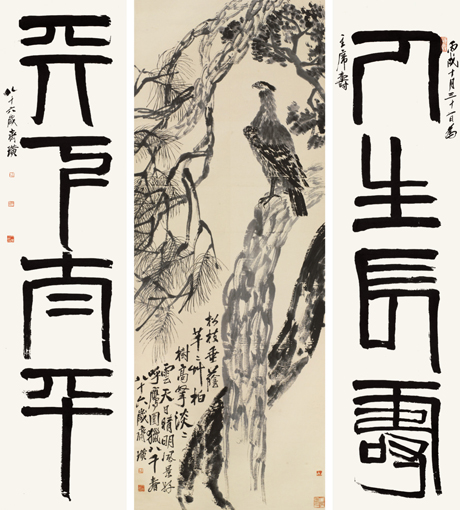 Chiang's rule may have come and gone, yet the painting, and its recent sales price, certainly indicate the changing nature of life and art in the world's most populous country. Towards the end of last year, The Economist reported that art sales in China now account for about 30% of worldwide sales, up from 9% in 2008.

Will Chinese bidders continue to outstrip their Western counterparts in 2013? Well, big names can still hold their own, if last year's figures, recently drawn up by market anylists Artnet, are anything to go by.

Over the past 12 months, thanks in part to a strong showing at Christies' Andy Warhol sales last autumn, The American pop artist took first place on Artnet's best selling artists of 2012 chart. His 1962 silkscreen, Statue of Liberty, sold for $43,762,500 last November, while the artist's combined sales for 2012 totalled $380,535,960.

Meanwhile, Picasso - who regularly topped these polls during the first decade of the 21st century - was in second place; his 1932 painting, Nature Morte aux Tulipes, fetched $41.5 at Sotheby's New York two months ago, while his total sales amounted to $334,903,375, pushing the 20th Century Spanish artist into second place. 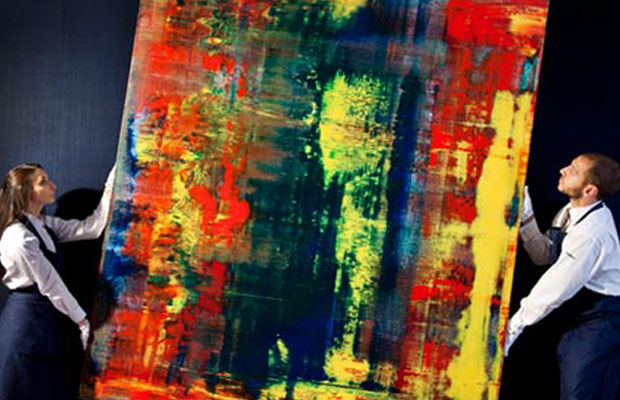 British rock guitarist Eric Clapton contributed to Gerhard Richter's position as the world's best-selling living artist, when he offered up for auction the work he owned by the 80-year-old German painter - Abstraktes Bild (1994) - last October. An anonymous buyer at Sotheby's in London bought the painting for $34,273,027, while Richter's sales for 2012 amounted to $298,932,200.

How should we regard these pictures and sums? Well, Bloomberg news quotes Citibank art analyst Jonathan P Brinstock as saying that easy-to-identify works by well-known Western artists are still bringing in the big bucks.

"The market is selective and concentrated on works by certain artists," he says. "The instant reconcilability of masterpieces by Warhol and Richter makes them well suited to performing well."

Meanwhile, increased scrutiny may have deflated Chinese figures; further on in The Economist's article, the paper describes the Chinese art market as not being entirely opaque; "local auction houses seem to be wildly exaggerating their sales," they note.

Nevertheless, big names in the Western Hemisphere can no longer be regarded as world beaters thanks to succes in one or two continents, while the highest auction house bids are now as likely to go to a New York screen-print as a Chinese scroll.

View the full list below, or take a look at Artnet for more detailed analysis. To learn more about Chinese artistic traditions, read our Ai Weiwei and Zhang Huan monographs, or our book on Chinese Pottery. And to understand the enduring allure of Warhol and Picasso a little better, take a look at our highly regarded works on them both. 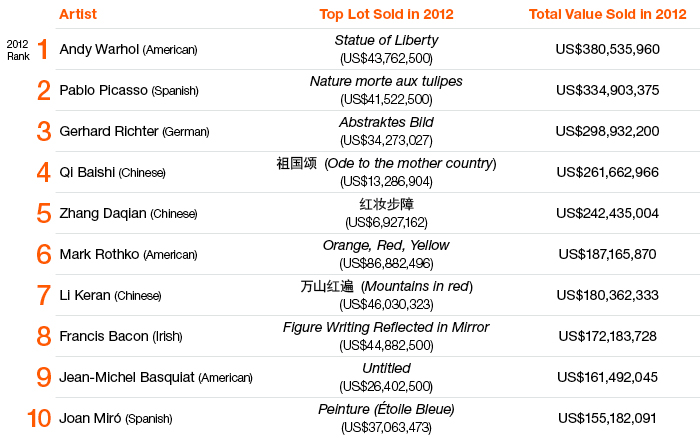 More on Will Chinese art continue its rise in 2013?