The Chinese Art Book is a magnificent, copious and essential primer on the art history of the world's oldest continuous civilisation. It does contain a chronology as an appendix – however, rather than proceed, chapter by chapter through the ages, the editors have ingeniously paired off artworks from different eras on opposing pages, creating often pointedly ironic juxtapositions which serve as commentaries on China, its past and its present.

And so, on pages 306 and 307, two improbable companion pieces. On the left hand page we have Buddha With Attendants, a work rendered in painted plaster on stone, dating from the eight century. It's one of nearly 500 decorated cave shrines at Mogao, which in total span a thousand years of Buddhist art. Here, we see the Buddha in the lotus position, almost complacently serene, properly flanked by his two disciples and a pair of bodhisattvas, white-skinned, plump ideals of female beauty in the Tang era. At the edges are two fierce guardian figures, or devarajas. All as it should be. 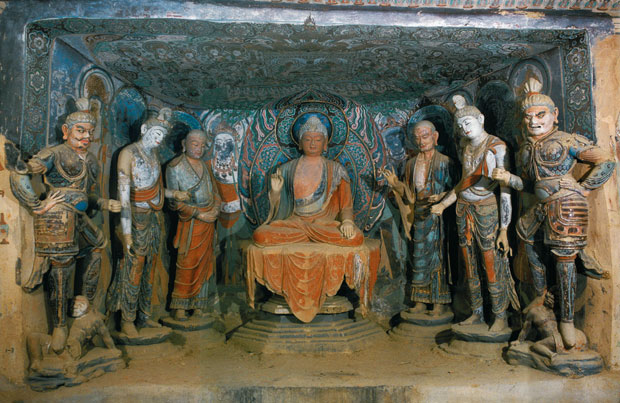 We're invited to compare this with Zhang Xiaogang's Bloodline: Big Family (1993), an altogether more haunting and haunted image. A glum couple in drab, Maoist garb with exaggeratedly large heads stare with plaintive stoicism from the canvas, faces lit by a a patch of fractured light. Despite the title, in keeping with modern Chinese restrictions they have just a single child, whose head is rendered in stark pink, with two tiny clouds of rain and sun hovering above it suggesting hopes and fears for the future. It's part of a series of paintings by Xiaogang based on family photographs dating back to the Cultural Revolution. In its harrowing uncertainty it contrasts vividly with the sumptuous certainty of the Buddha. 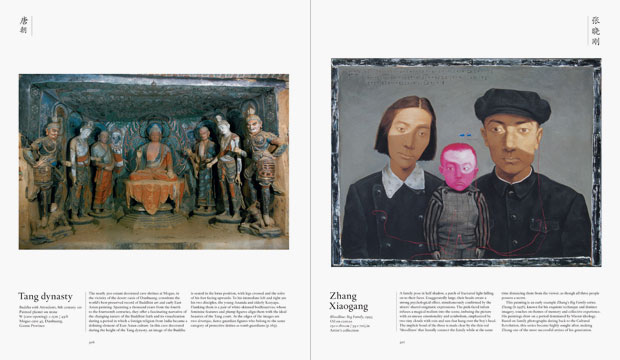 The spread as it appears in The Chinese Art Book

Would you like to see more? Then read on. Diane Fonteberry introduces the book here; you can browse through a gallery of images here; or read about some highlights here, and when you've done that, why not buy the book from the people who made it, here.