Andrew Bird and Theaster Gates have written some songs!

In 2015 the Chicago artist and activist Theaster Gates took ownership of the Johnson Library, the editorial archive of publisher of African-American magazines, Jet and Ebony. Gates put the leather-bound editions of magazines, published from 1945 up until 2014, in his Chicago cultural institute, the Stony Island Arts Bank, and has also reinterpreted the book’s spines in a more recent art exhibition at the Regen Projects. In the show, But To Be A Poor Race, Gates printed a series of his poems onto the spines of bound volumes of Jet.

“Arranged at eye level on the gallery wall, Gates envisions that when the poems are read aloud by its readers,” explained the gallery, “their voices will create a cacophony of sound, chanting the mantra of Black political thought and street poetry of the late 90s.” 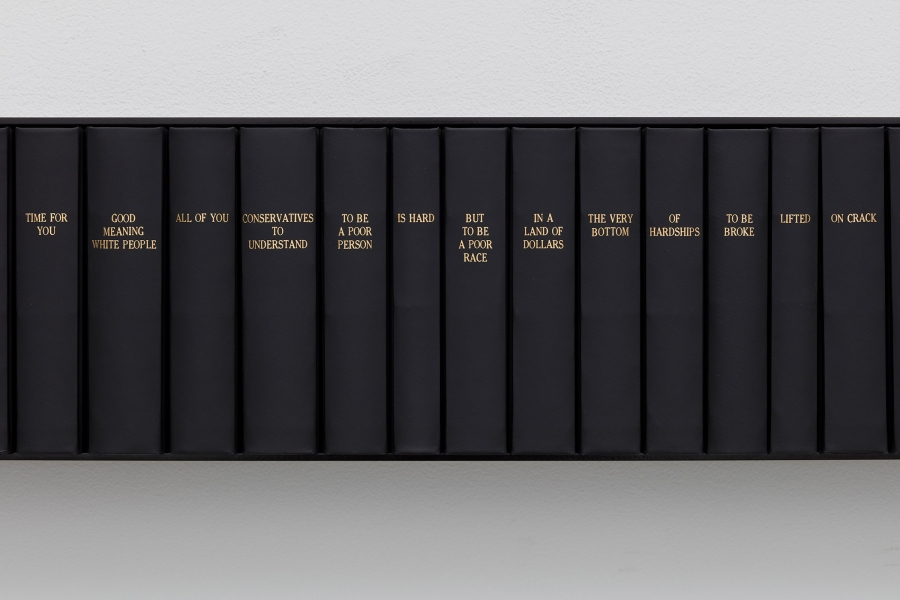 Like Space on Page (detail) (2017) by Theaster Gates. Image courtesy of Regen Projects

Now, that chanting has found a musical backing, thanks to the singer-songwriter and fellow Chicagoan, Andrew Bird. In a recent video, Bird and Gates discuss their work, the city they live in, and perform quite a few new compositions. The first comes around the 12-minute point in the video, followed by four or five further compositions, interspersed with a fairly enlightening discussion between the two of them. Listen out for Bird’s signature whistling, as well as Gates’ fine, choral-trained voice.

And for more on Gates’ art, music and activism order a copy of our Theaster Gates book here.