No matter how unconventional and shocking a contemporary artist is in his or her working life, each tends to accept cash in a remarkably conventional fashion – a polite speech,  followed by a swift banking of the cheque. US artist Theaster Gates rose even futher in our estimation last night when, upon winning the £40,000 ($60,000) Artes Mundi prize in Cardiff, he pledged to split his winnings with his fellow short-listed artists.

The gesture is in keeping with Gates' practice. The artist, who lives and works in Chicago, is known for drawing heavily from the city's poorer neighbourhoods, and reinvesting the money he makes as a contemporary art world back into these parts of city. Indeed, his, which occupies an uncanny position somewhere between sculpture, philanthropy and property development, has been described as “real estate art”. 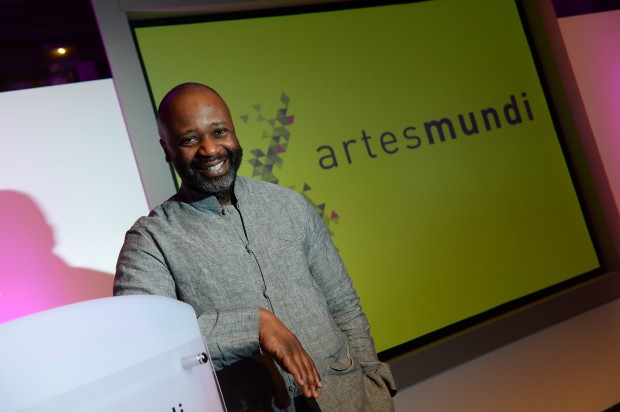 Nevertheless, Gates' appeal reach far beyond his city's limits. Artes Mundi, which was  founded in 2002 and is held every two years in Cardiff, and draws its nominated artists from across the world.

Gates's winning exhibition, entitled A Complicated Relationship between Heaven and Earth, or When We Believe, displayed a number of  pieces, each offering a compelling meditation on  different modes of religious understanding. In keeping with the artist's various musical projects, there's a recording of Gates and his musical collaborator the soul singer Billy Forston singing the Christian hymn, and a display of roof slates recovered from a demolished church in Chicago. However, there's also a Malian folk charm, or Boli, fashioned from mud into the shape of a bull, a Western, Masonic wooden goat, which Gates has set onto a circular railway track, and a chart published by the Catholic church in the 1920s, describing the rise and fall of other religions. 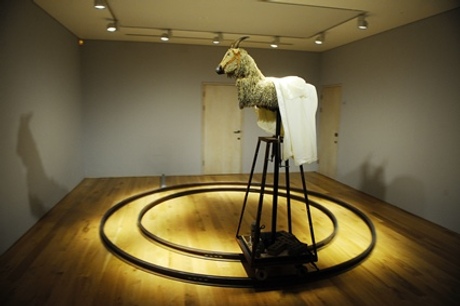 Masonic goat from A Complicated Relationship between Heaven and Earth, or When We Believe by Theaster Gates

When describing the pieces, Gates was typically critical of the Masonic fetish. “There was a goat, formerly used to help men get from rather obscure and uninteresting lives to believing that they had the right, and eventually, the information to change the world,” he says. “The goat had power as it was the vehicle that led to enlightenment, brotherhood, sacred passage of the Masonic Order. At some point, the goat got old and was no longer used for ritual. At that point, it was a reminder of a period of power and an abject reflection on what is possible when the world believes in things.”

To find out more about what Gates himself believes in, look out for our forthcoming monograph, due out later this year. Meanwhile, you can watch this video, below, wherein the artist describes buying up old housing in the Windy City, could be considered a work of art.