Discover how Soviet artists developed an early form of abstract art, which even found its way on to tea services

Iconic is a heavily overused term within art. Yet it is an almost literal description for one painting by Kazimir Malevich, the founder of Suprematism, who was born today, 23 February, in 1878. Working at a time when old assurances were weakening, Malevich saw how his abstract works might occupy a spot on the wall previously reserved for godly images.

“At an exhibition entitled ‘0.10’ (‘Zero Ten’) in St Petersburg in 1915, Black Square (completed in 1913), what would come to be be seen as Suprematist work by Kazimir Malevich, hung in the corner of the room, the traditional setting for an icon in an Orthodox Russian home,” we explain in Art in Time. “The artwork was a square canvas painted black. Malevich claimed in 1927 that in works such as this, he was trying to “free art from the dead weight of the real world”. 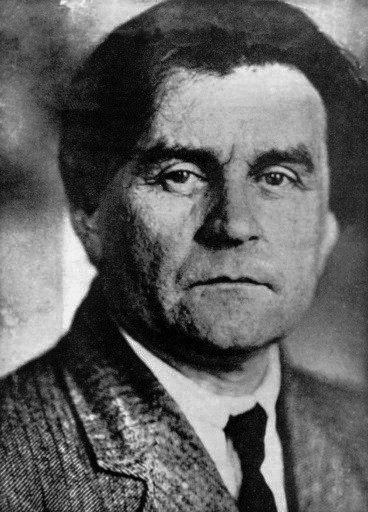 This new freedom required a new term. In his 1926 book, The Non-Objective World: The Manifesto of Suprematism, Malevich explained that “By 'Suprematism' I mean the supremacy of pure feeling in creative art. To the Suprematist the visual phenomena of the objective world are, in themselves, meaningless; the significant thing is feeling."

This abstract, spiritual version of painting, devoid of politics or reglion, was particularly bold, given Malevich's time and place, as we explain in Art in Time.

"In rejecting narrative subject matter, Malevich chose to ignore both current political events and traditional religious imagery, replacing both with a search for something beyond the physical world. His extreme form of abstraction asks the viewer to meditate on the qualities of form and paint and glorifies these as spiritual in and of themselves.” 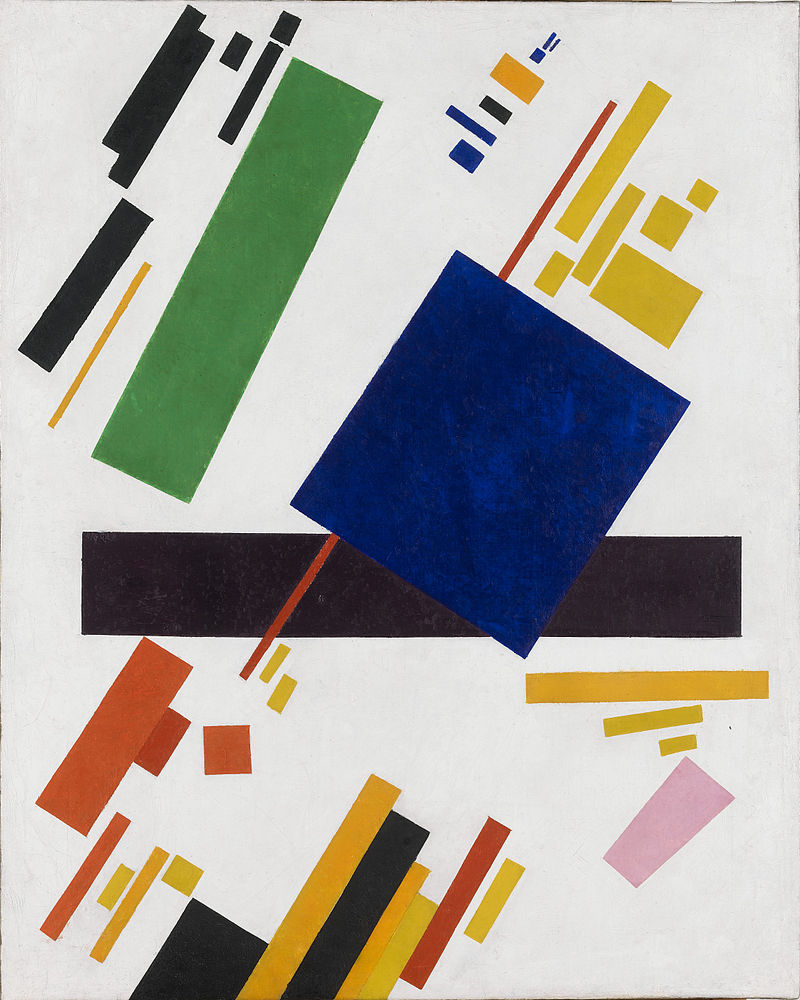 “Malevich, who had come to Moscow from Kiev in 1904, had been part of a group of Russian artists there, including Natalia Goncharova and Mikhail Larionov. Inspired by Cubism and Futurism, they experimented from 1910 with the dissolution and fragmentation of form, often combining this modern technique with traditional folk imagery, producing a version of the European avant-garde that was distinctly Russian.”

“Malevich quickly developed beyond this inherently representational style. Seen as a complete purification of art, Suprematism reduces form to its essential qualities – geometric shapes, the simplest of which is the square – and removes the distractions of descriptive colour. Many Suprematist paintings include multiple geometric forms, carefully and precisely placed so that they appear to float and overlap on a white background, lending the canvas an ethereal quality. This was important, for Malevich was opposed to the Constructivist ideals of his one-time friend Vladimir Tatlin, who saw art as functional and rooted in the material world.” 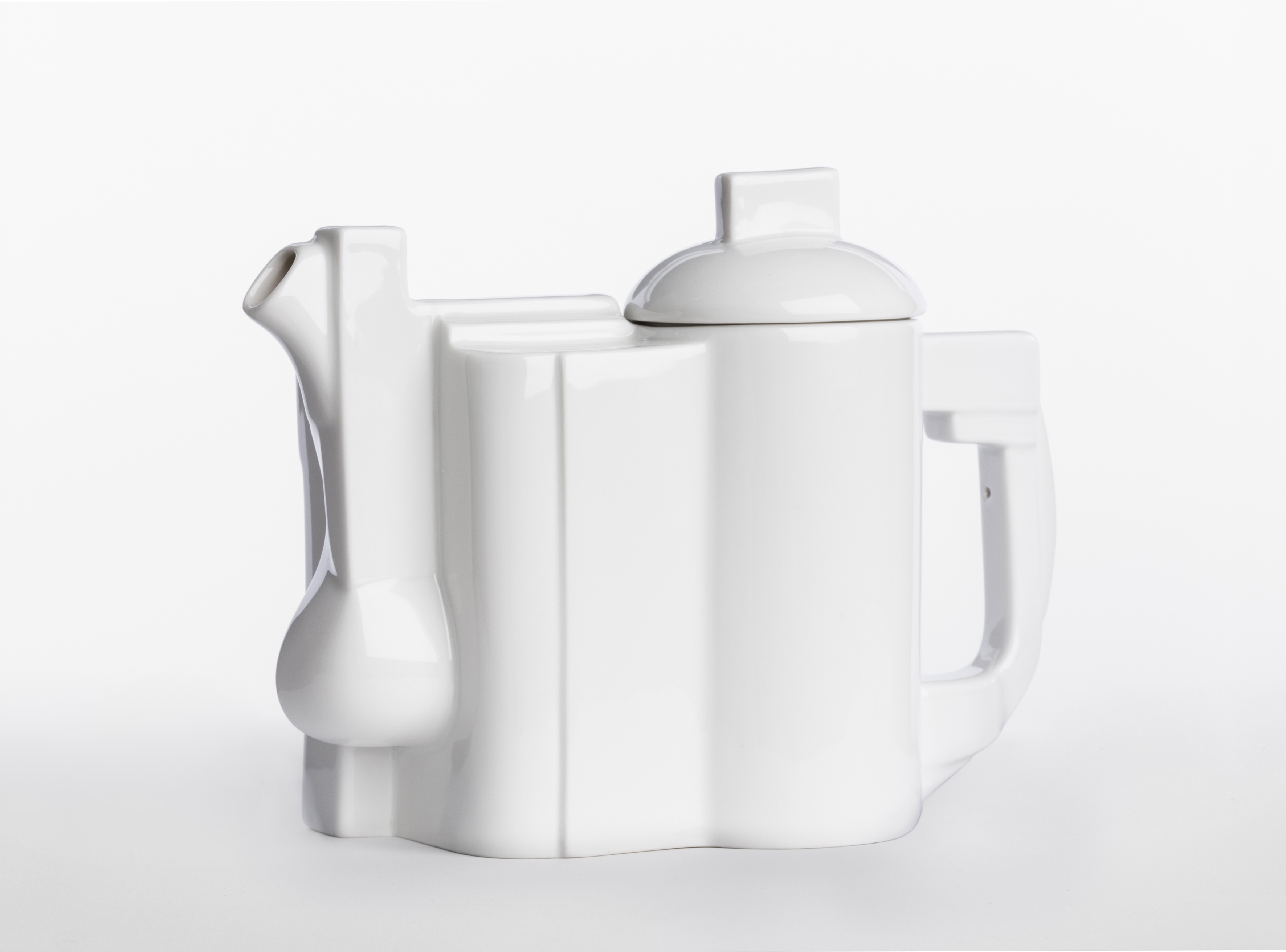 Suprematist Teapot (1923) by Kazimir Malewich. From the collection of Edmund de Waal. Photo by Ian Skelton

“In his White on White series, painted after the 1917 Bolshevik Revolution, Malevich took his ideas to their logical conclusion. A white, slightly asymmetrical square floats across an off-white background, the painterly surface seeming to oscillate and shimmer. The varying tonality of the white paint and the positioning of the square prevent this from being a static, coldly calculated composition. Instead, the involvement of the artist can be clearly seen in the brushwork. The edges of the canvas do not act as constraints, but seem to represent infinite space, in which the overlaid square is free to move. Although the White on White series might initially appear to have nothing to do with the real world, Suprematism can be seen nevertheless as a means of reaching for the utopian ideals that were offered by the 1917 revolution. In removing specific subject matter from his art, Malevich freed both painting and its audience from the constraints of objective meaning – a form of revolution in itself.” 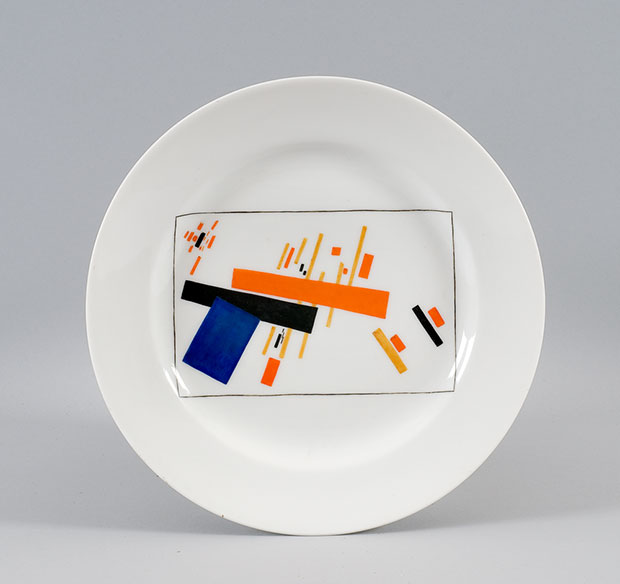 The aftermath of that revolution can still be detected in today’s art world. While the US Minimalists probably didn’t receive undue influence from the Russian Suprematists, as Malevich and co’s work wasn’t widely appreciated in mid-century New York, their innovations certainly predate Minimalism.

Within the contemporary art world, artists such as Keith Coventry and Robert Kelly have drawn more consciously on Malevich’s legacy.  And there's even an architectural element, as this summer the London gallery GRAD plan to build a walk-in Black Square at the Venice Biennale, which will house a replica of Lenin's tomb. 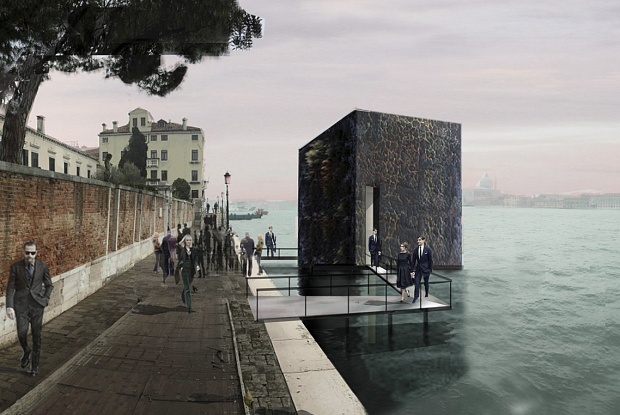 Over a century on from Malevich’s first square works, it’s harder today to believe in the spiritual and artistic supremacy of abstract geometric shapes. However, Malevich’s paintings and accompanying ideals epitomize an extremely hopeful type of Modernism, which aimed to escape the very confines reality itself, and for that alone, we can still admire them.

For more on how Suprematism fits into the greater sweep of art history get Art In Time. For more on abstract painting get Painting Abstraction; and to see more contemporary echoes of Malevich, order our new painting survey Vitamin P3.