The First World War changed the course of European art, giving rise to movements such as Dada. However, WWI and its subsequent armistice, also gave rise a wider reaching cultural shifts in other parts of the globe, as visitors to The Color Line, a newly opened exhibition at Paris’s Musée du Quai Branly–Jacques Chirac can discover. The show examines African-American art from the end of the Civil War in 1865 up until the present day, and, consequently touches on one the US’s key cultural movements of the 20th Century: The Harlem Renaissance.

The Harlem Renaissance was “a flowering of black creativity centered on Harlem, New York, from the early 1920s to the mid-1930s,” as we explain in Art in Time.

“Harlem became a cultural centre partially as a result of the movement of African- Americans from the rural South to northern cities in 1919–26. While the abolition of slavery in 1865 and the end of the civil war had made changes at an official level, racism was still rife throughout the twentieth century. The end of World War I brought the promise of jobs and a better quality of both physical and intellectual life as a result of northern industrialization.” 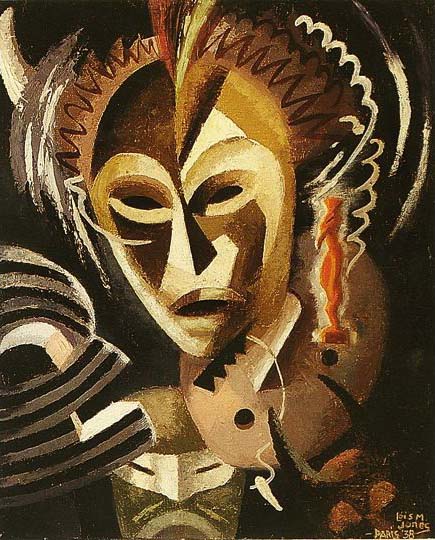 Les Fétiches (1938) by Loïs Mailou Jones. From Art In Time

Today, this period’s music is perhaps its most prominent cultural legacy. We all have heard of jazz musicians such as Duke Ellington and Louis Armstrong, as well as perhaps the dancer Josephine Baker. However, as Art in Time explains, painting was also a mouthpiece by which African-Americans expressed a racial pride.

“Harlem artists such as Palmer Hayden expressed their dual identity: in The Janitor Who Paints, the smartly dressed beret-clad painter, surrounded almost comically by the tools of a cleaner, is in part a challenge to the convention that art must be secondary to ‘real work’ for the black man. 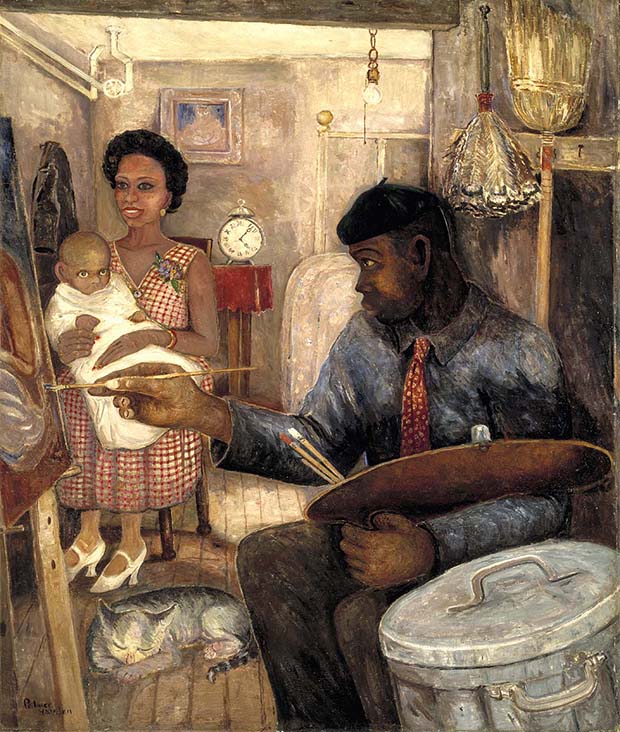 The Janitor Who Paints (c.1930) by Palmer Hayden. From Art in Time

“Pride was to be found in full participation in American society. Harlem artists wanted to reclaim the stereotypes and caricatures that had been used against them to redress the power relationship and take control of their depicted identity. In Les Fétiches, Loïs Jones combines masks from five different tribes, overlapping them to suggest vigorous movement; she internalizes the Eurocentric Modernist appropriation of African art, turning the notion of Primitivism on its head by approaching the canvas as a black woman. The result is mysterious but formally attractive and confident. Similarly, William H. Johnson uses broad, imprecise brushstrokes, which had come to signify “primitive” subject matter, fusing this with the conventions of self-portraiture; the presence of a paintbrush in his right hand and his confrontational look make this an assertive image that precludes mockery.

“Aspects of Negro Life by Aaron Douglas, was a cycle of four murals commissioned by the Public Works of Art Project to decorate the section of the New York Public Library intended for research into black culture; it is part of an official attempt to take African heritage seriously. Douglas combines imagery from African-American history with contemporary life, incorporating the influences of African sculpture, jazz music and geometric abstraction. His celebratory scenes suggest the possibility of reconciling aspects of Negro identity with contemporary American society. 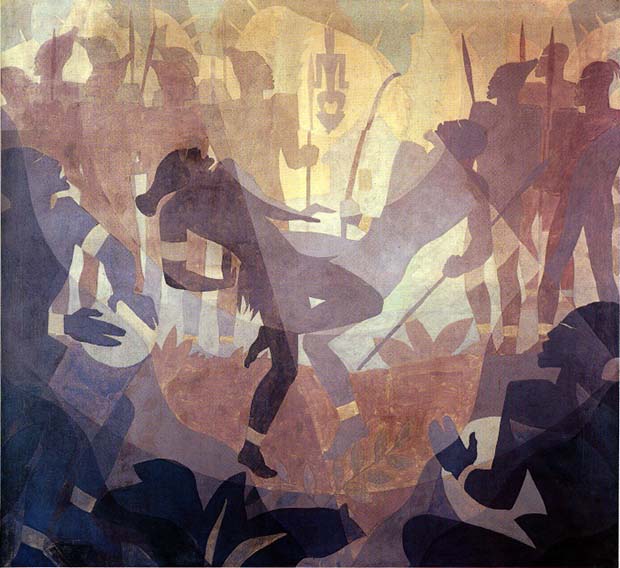 Negro in an African Setting (1934) by Aaron Douglas. From Art in Time

Nowadays, nearly a century later, when African American cultural identity is so clearly defined, some of this Afrocentric material looks a little dated. Also, the term “renaissance” feels inaccurate, as the movement was more a birth of black art in America, rather than a rebirth. Indeed, some scholars argue that the movement doesn’t represent a true rupture, but rather the first time the wider world had noticed ongoing African American practices that had previously been ignored.

Nevertheless, the Harlem Renaissance still serves as a useful beginning point when thinking about black, urban art in the American century, and also a demonstration of how Modernist techniques and sympathies, often seen as truly taking root in the US some decades earlier, were already present in the ateliers north of 110th street.

For greater insight into this movement and many others order a copy of Art in Time here.

More on A Movement in a Moment: The Harlem Renaissance