Facts within art history aren’t always as solidly verifiable as we would like them to be. Can we say with certainty that Wassily Kandinsky, born on this day, 16 December, in 1866, was the first abstract painter? The artist, honoured today with a Google Doodle, was certainly a pioneer, but humans have been creating non-figurative art for millennia.

Nevertheless, as we explain in our world history of styles and movements, Art in Time, the Russian artist was certainly one of the earliest and most influential abstract painters of the 20th century.

This salience seems unlikely, judging by his early life. The Russian-born artist studied law and economics initially, and only took up painting at the age of 30. However, on moving to Germany in 1896, he soon developed his innovative ideas within a few distinct groups, outlining his theories in key texts.

In 1911, having settled in Munich he formed the Der Blaue Reiter, or Blue Rider group, with a number of fellow painters, including the Swiss-German artist Paul Klee. As Art and Time explains, the group’s name was a reference to “horses and the harmony of the natural world.” 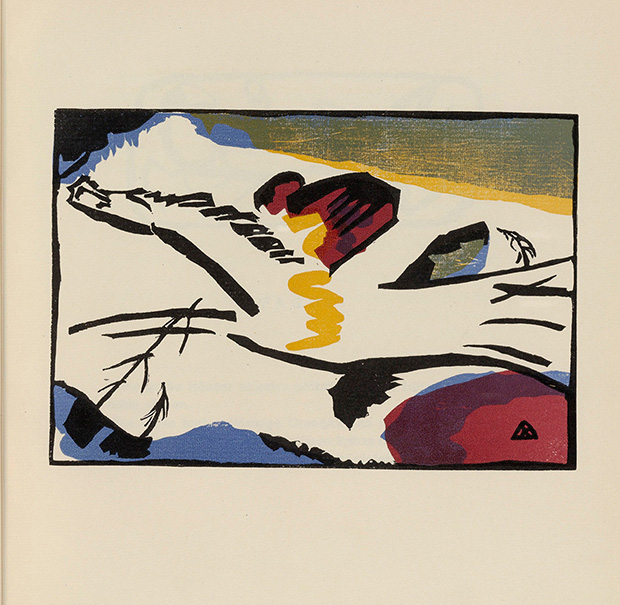 Lyrical (from Sounds) (1911) by Wassily Kandinsky

Yet these naturalistic sympathies were alloyed with a progressive desire to express certain numinous, non-figurative expressions directly onto the canvas.

In the Der Blaue Reiter entry in Art in Time, we explain, “Kandinsky developed his profound belief in the evocative possibilities of form and colour into some of the first truly abstract art of the twentieth century. Kandinsky’s ideas were fuelled by an interest in Theosophy, a movement that insisted on following transcendental truths that could not be explained by science.”

Music also inspired him to create artworks of high spiritual rather than visual fidelity. “In Concerning the Spiritual in Art (1911) Kandinsky drew an analogy between abstract painting and music, commenting that ‘music has been for some centuries the art which has devoted itself not to the reproduction of natural phenomena, but rather to the expression of the artist’s soul, in musical sound.’”

Why did he try to paint music? Well, some desire might stem from the way in which the artist experienced aural and visual sensations. “He had synesthesia,” our text states, “a condition in which one sees sounds as colours and hears colours and forms as sounds, referred to in his book of prose poems and wood cuts, Klänge (‘sounds’).” 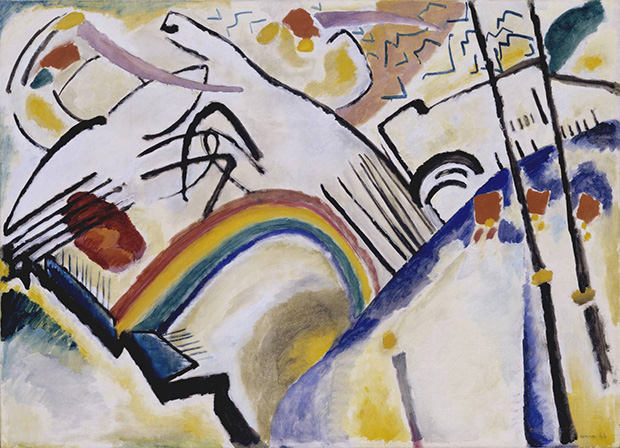 If Kandinsky developed these ideas among a lesser-known group of artists, he went onto popularize them at the best-known art school of all time, the Bauhaus. “Kandinsky joined the group in 1922, as a master in the small wall painting workshop,” we note in our Bauhaus entry in Art in Time, and during this time developed his theories concerning a kind of painting that might bridge some gap between spiritual impulse and logical understanding.

Singling out the 1926 painting, Several Circles, the book notes that this oil-on-canvas work “seems to relate to his 1926 textbook, Point and Line to Plane, in which he described the ‘point’ (an ‘ideally small circle’) as the purest and most basic element of painting, motionless in itself but with the potential to create a moving line or static plane. Circles according to Kandinsky, would appear to shift when placed in tension with other forms, and the cosmic appearance of Several Circles is suggestive of his desire to reconcile spirituality and logic.”

The artist left Germany after the Nazis closed the Bauhaus in 1933, settling in France. While his ultimate ambition to create an all-encompassing theory of painting, elevating the form to equal the cerebral purity of music and logic, might not have been wholly successful, it’s hard to underestimate the influence of his work. Before passing away in 1944, Kandinsky personally influenced Tachisme, the French abstract painting school, while his paintings, exhibited in 1939 at New York’s MoMA, inspired the city’s Abstract Expressionists. So while he might not have been the first to paint non-figurative forms, the beauty and ambition of his work helped ensure that he certainly wasn’t the last.

For greater insight into the artist and his impact, buy a copy of Art and Time here, and for a contemporary take on the movement that Kandinsky helped give rise to, invest in a copy of the truly fascinating Painting Abstraction.