As Martin Luther King Day approaches, our eye was caught by a great looking show at the New-York Historical Society. It showcases a powerful collection of photographs by Stephen Somerstein, chronicling the 1965 Selma-to-Montgomery Civil Rights march.

The march marked a peak of the American civil rights movement and saw hundreds of people marching from Selma to the State Capitol Building in Montgomery, Alabama over four days in March 1965, to protest against the resistance that the Student Nonviolent Coordinating Committee (SNCC) had encountered in their attempts to register black voters.

By the end of the month, the group had grown to 25,000 people whom Dr. King addressed from the steps of the Montgomery State Capitol. Three months later, President Lyndon Johnson signed the Voting Rights Act of 1965.

Opening today and running until April 19, Freedom Journey 1965: Photographs of the Selma to Montgomery March features work by Somerstein, a City College student who was 24-years-old at the time and the self-appointed picture editor of the City College newspaper.

“When Dr. King called on Americans to join him in a massive protest march to Montgomery, I knew that important, nation-changing history was unfolding," he says. "So I wanted to capture its power and meaning with my camera.” 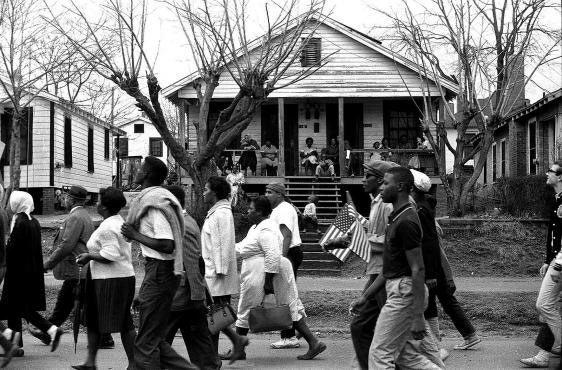 The show’s highlights include images of Dr. King addressing the crowd of 25,000 civil rights marchers in Montgomery; folk singer Joan Baez, standing before a line of state troopers blocking the entrance to the State Capitol and white hecklers yelling and gesturing at marchers.

Somerstein went on to pursue a career in physics, building space satellites at the Harvard Smithsonian Astrophysical Observatory and Lockheed Martin Co. Amazingly, most of his photos were not showcased until he participated in a civil rights exhibition at the San Francisco Art Exchange in 2010. “I realized that I had numerous iconic and historic photographs that I wanted to share with the public,” he says.

Photographer Danny Lyon was also shooting a lot in the south at the time as you can see from the copious photographs in our book The Seventh Dog. At last year’s Paris Photo, Pitt purchased one of Lyons’ photos from the time.

More on From Selma to Montgomery with Dr. King