Phaidon publisher Amanda Renshaw introduces Steve McCurry Untold, a book that looks at the stories and circumstances behind the photos that made the Magnum photographer famous

STEVE MCCURRY UNTOLD
Steve McCurry Untold: The Stories Behind the Photographs takes an unprecedented look at the work of Steve McCurry, one of today's finest and most daring imagemakers. This is the first book to fully explore how the world-renowned photographer finds, takes and develops his uniquely iconic photographs. Presenting a personal archive of material, Steve McCurry Untold features the very best of McCurry's most beautiful and powerful photo stories, taken from around the world over the last 30 years. Each story is illustrated with never-before-seen notes, images and ephemera – saved by McCurry from his extensive travels – and over 100 lavish, full-colour photo plates of McCurry’s most significant work. Brought to life by newly commissioned essays, the stories offer a critical narrative and give new insight and ideas into the background, experience and ideas behind Steve McCurry’s unparalleled photography. Together, these fascinating documents reveal a new and exciting view of the story behind the story. 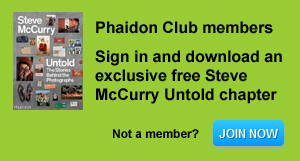 Phaidon production controller Laurence Poos worked closely on the Steve McCurry Untold book, ensuring that the prints in the 'gallery' sections exactly matched those created by Steve McCurry himself and that the photographer's journals and personal ephemera were presented in the most authentic, true-to-life way possible.

"The printing is critical on a Steve McCurry book. His photographs are known across the world so he is of course very particular about how they appear in print. There's always a big collaboration with him to ensure they are right. Steve supplies us with the hi-res scans along with match prints to make sure we check and match all stages against the original print supplied, all the way to the final printing of the book. On the repro side it went back and forth quite a few times to make sure we'd got the colour where it should be, I even travelled to New York to get the final sign off on the colour proofs from Steve before we went to press. The most corrections we had were on the ephemera where we changed a few crops, nothing major. With the ephemera in the book, the objective was to make everything look as real as possible. We didn't tamper with anything, so if there were brown edges that showed how old a particular item was we kept them. The desire was to keep it looking as authentic as possible. Some of the older photographs were a bit of a challenge to put on a double page spread but as someone who's very interested in photography I like the proper film grain, I think it adds a lot and it puts certain images in context which I think is important in a photography monograph, the first chapter (on Afghanistan) is a particularly good example of this. The challenge with photography books is always to find a paper that carries the images really well so we returned to a certain printer because we were happy with how they had printed a previous work. It was fascinating for me working with Steve for the first time, he's one of the iconic Phaidon authors. And to get the story behind the photographs as you do in Untold I just find incredibly interesting."
SPECIFICATIONS 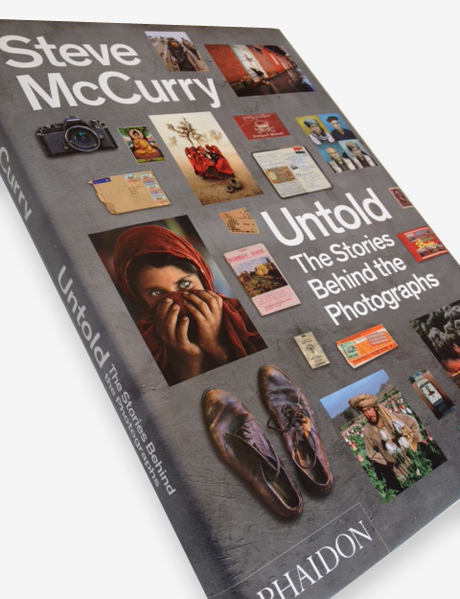 Hardback | 345 x 245 mm
264 pages | 500 images | 2.4 kg
WHO IS STEVE MCCURRY?
Steve McCurry has been a one of the most iconic voices in contemporary photography for more than 30 years, with scores of magazine and book covers, over a dozen books, and countless exhibitions around the world to his name. Born in a suburb of Philadelphia, Pennsylvania; McCurry studied film at Pennsylvania State University, before going on to work for a local newspaper. After several years of freelance work, McCurry made the first of what would become many trips to India. Travelling with little more than a bag of clothes and another of film, he made his way across the subcontinent, exploring the country with his camera. After several months of travel he found himself crossing the border into Pakistan. There, he met a group of refugees from Afghanistan, who smuggled him across the border into their country, just as the Russian Invasion was closing the country to all western journalists. Emerging in traditional dress, with full beard and weather-worn features after weeks embedded with the Mujahideen, McCurry brought the world the first images of the conflict in Afghanistan, putting a human face to the issue on every masthead. Since then, McCurry has gone on to create stunning images over six continents and countless countries. His work spans conflicts, vanishing cultures, ancient traditions and contemporary culture alike - yet always retains the human element that made his celebrated image of the Afghan Girl such a powerful one. McCurry has been recognised with some of the most prestigious awards in the industry, including the Robert Capa Gold Medal, National Press Photographers Award, and an unprecedented four first prize awards from the World Press Photo contest.
Couple Untold with the books below for a photographic library comprising the best images of the 20th century
Browse the library
SOME STEVE MCCURRY LINKS