Fossilised cars, phones, cameras, guitars and boom boxes - how he switches from commission to gallery

The artist Daniel Arsham met the architect Alex Mustonen when they were both studying at Cooper Union in New York. “The two schools – Art and Architecture – share the same workshop and it had areas for wood, metal, casting, pretty much everything,” recalls Arsham in our new book, Snarkitecture. “So everyone from the art school and the architecture school were all making things in there together.”

Arsham and Mustonen went on to make things together after graduation, setting up their company, Snarkitecture, in Brooklyn in 2008, to create furniture, furnishings, installation, interior features, games and adult recreation grounds that were, as far as the firm saw it, neither art nor architecture.

However, Arsham has kept his artistic practice over the past ten years, creating works that, though similar in appearance to Snarkitecture’s work, are very much created for a gallery setting.

Arsham’s new show opened at Galerie Perrotin in New York this weekend, though, even if, as Arsham claims, the works actually date from 1000 years in the future.

Entitled 3018, the exhibition’s largest pieces are versions of two well-known cars: a 1981 Delorean DMC-12 – the make and model featured in the 1985 film, Back to the Future – and a 1961 Ferrari 250GT California – the very car Matthew Broderick joy rides in the 1986 film, Ferris Bueller’s Day Off. 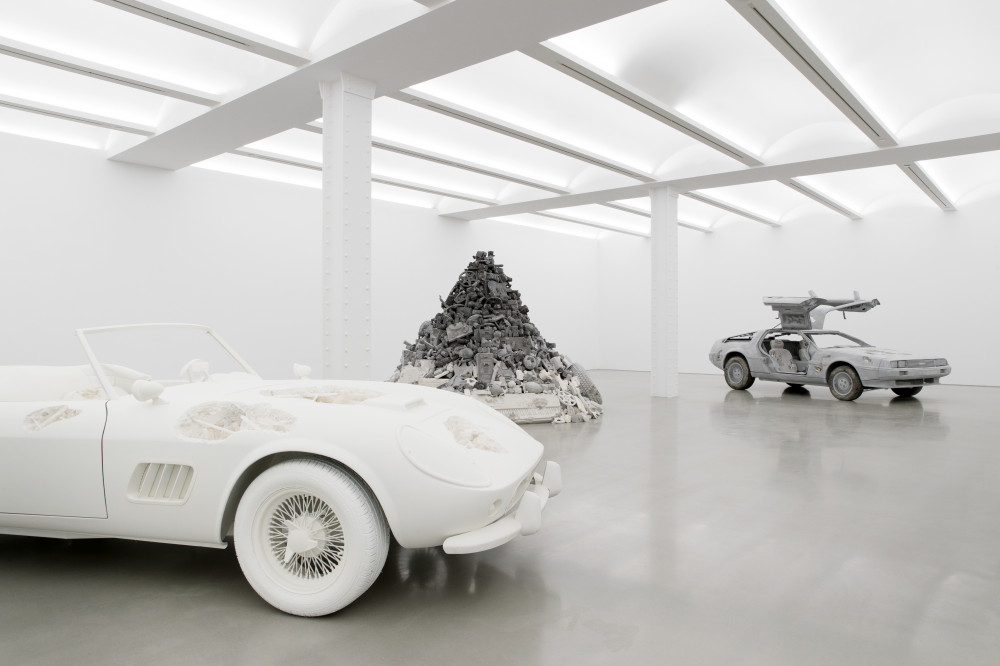 Installation view of 3018 by Daniel Arsham at Galerie Perrotin. Image courtesy of the artist and the gallery

Neither looks exactly like vehicles in the movies. In both cases Arsham has recreated the rides as petrified relics, as if excavated from some futuristic dump. The cars are accompanied by a pile of fossilised phones, cameras, guitars, boom boxes, and other high-end 20th century consumer durables. The show also features enlarged, gypsum-cast copies of cartoon badges, and characters such as Bugs Bunny, wrapped, roped-up and also cast in white cement.

The works don’t look so dissimilar to the kind of gypsum-cast sneakers Snarkitecture make for the store interiors of US fashion retailer, Kith, or the matte white Pontiac Firebird the practice made for the electro band, Chromeo back in 2013. 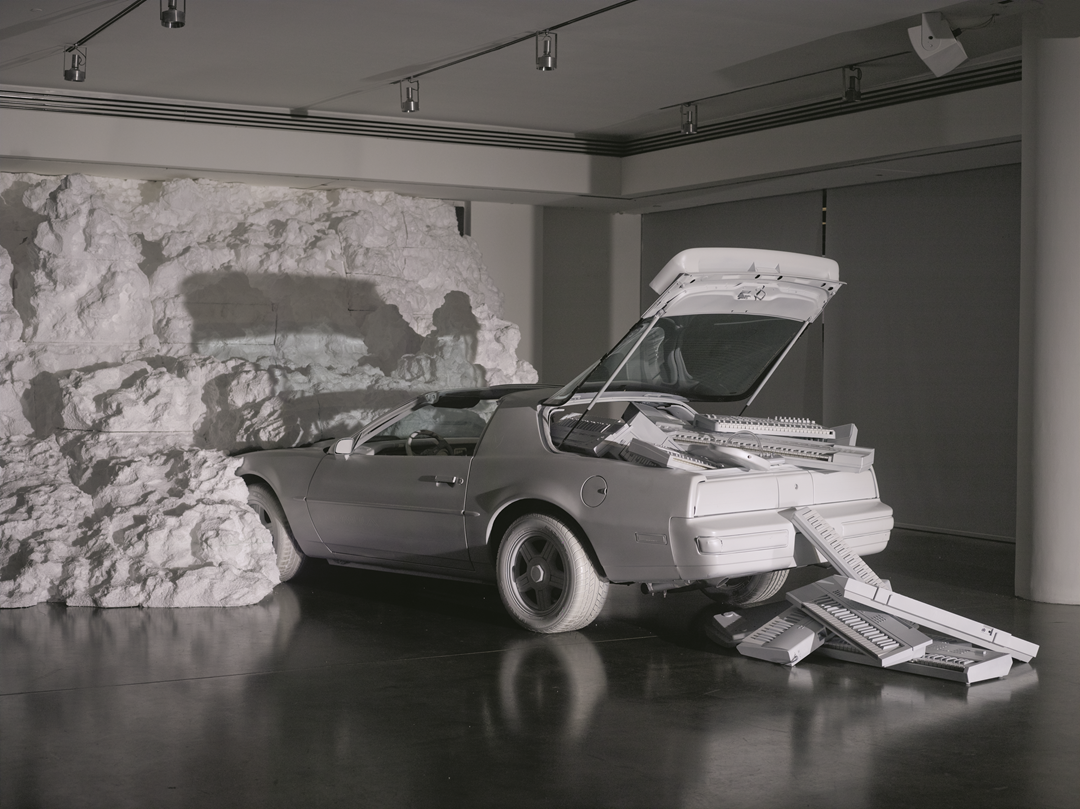 However, there’s something a bit more nostalgic about this solo show, and something dystopian too. Arsham’s obsolescent, big boys’ collectors’ items might be gently lampooning the kind of men who can afford to keep a vintage automobile in near perfect condition, were it not for the incredible attention Arsham pays to small details. The cars are wonderfully period correct, right down to their speedometer needles, and the smooth finish is offset by chunks of crystalline quartz and pyrite.

Who knows whether these works will survive a thousand years, yet Arsham’s 3018 are, unlike his Snarkitecture commissions, clearly a work of art.

More on The art that Daniel Arsham fits in around Snarkitecture