Andy Warhol's death, 31 years ago today, hit the worlds of art, music and popular culture really hard, partly because it was so unexpected. He died aged 58, at 6:32 am on 22 February 1987, in New York Hospital in Manhattan, following what appeared to be a fairly routine gall bladder operation.

Warhol’s demise was also so tragic because his art so rarely dwelt on tragedy. While mortality and mourning were covered in works such as his Death and Disaster series, his later output had mainly engaged with fun, frivolous subjects, such as pop bands, discos and the gilded life of socialite Manhattan. Indeed, in the final interview before he passed away, the erstwhile illustrator turned pop pioneer asserted, “I was always a commercial artist and I’m still a commercial artist." 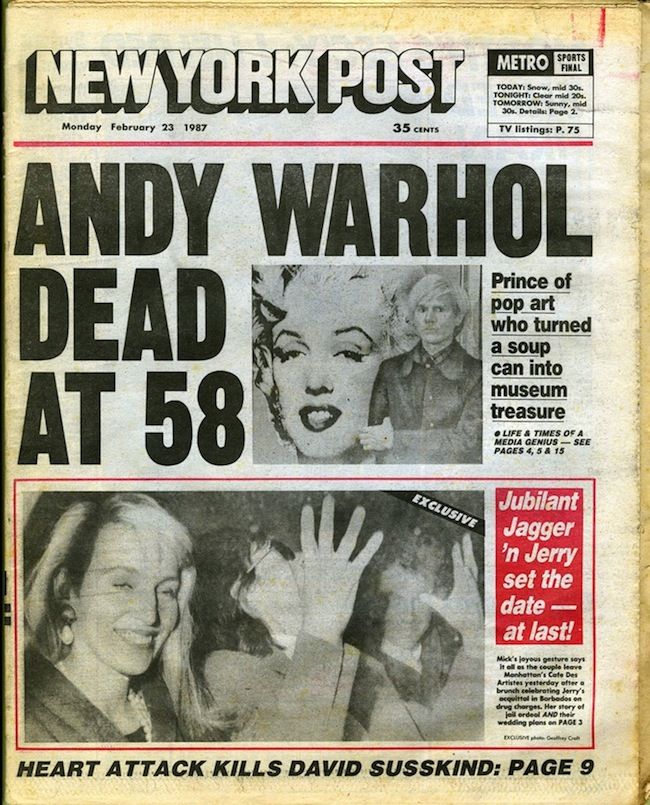 Yet, in his final cycle of paintings, Warhol had revealed something of his spiritual side, as well as a long-hidden longing for human, heartfelt brush strokes.

In 1985 the gallerist and confidant Alexandre Iolas commissioned a series of works from Warhol based around Leonardo Da Vinci’s Last Supper. Iolas, who had staged Warhol’s first gallery exhibition in 1952, intended to show the works in his new Milanese gallery, housed within the Credito Valtellinese bank’s headquarters, a few yards from the Santa Maria delle Grazie church where Da Vinci’s original still hangs.

The show could be dismissed as a simple, irreverent stunt. However, as Joseph D Kettner II explains in our Warhol Phaidon Focus book, in creating this final set of works Andy the artist - and lifelong Christian - revealed his spiritual side.

“When his colleagues opened the door to his studio after his death, they discovered his personal side in the monumental, hand-painted The Last Supper paintings that dominated the room,” Kettner writes. “These canvases, with their delicately laid lines, painted on a scale greater than that ever attempted by the artist, testify to his technical ability, his spiritual beliefs and his aspirations to greatness.”

Working continuously on the series for over a year, Andy had created hundreds of paintings, prints and drawings, employing a broad repertoire of techniques: screen-printing, projections, photo-transfers, torn paper collages and painting by hand. “The result is perhaps the most ambitious series of religious paintings in the twentieth century,” according to Kettner.

Warhol didn’t travel to Italy to work from the original, but chose instead to create his works from other commercial reproductions. What’s more, he didn’t simply stick to the Da Vinci original, but broke up and repeated elements from the work, while throwing in logos, newspaper cuttings and other pieces of pop ephemera.

“In some of his most innovative compositions selections from Leonardo’s fresco revolve around a detail of Christ and his disciples within an oval price tag, 6.99,”  Kettner writes. “The golden yellow silhouettes Christ’s torso and serves as a halo, highlighting his head within a mandorla (an aureola which surrounds the figures of Christ and the Virgin Mary in traditional Christian art). Below him is the phrase ‘The Big C’, an obvious reference to Christ, who is surrounded by the owl of wisdom and the eagle of redemption.”

What’s more, these snatches of contemporary print media aren’t random selections, but carefully placed, significant inclusions. Warhol appropriated ‘The Big C’ from a newspaper headline of the time that read: ‘The Big C: Can the Mind Act as a Cancer Cure?’ The source  indicates Warhol’s interest in alternative medicines at this time - possibly as a potential remedy for his physical ailments. Meanwhile, "the Mineola motorcycles that race across the canvas tie together a complex composition that is masterfully painted,” writes Kettner.

Moreover, the pictures aren’t all mechanical screen prints, but instead created using paint and a brush. "I painted them all by hand – so now I’ve become a Sunday painter," Andy said. "That’s why the project took so long. But I worked with a passion.” In these paintings Warhol reveals his personal version of Catholicism coloured by the irony of his Pop images.

In his eulogy at the artist’s memorial service the British art historian John Richardson said, Warhol had a “spiritual side that he hid from all but his closest friends”, which could serve as “the key to the artist’s psyche.” A key which, ironically only came to light after Warhol left the material world. 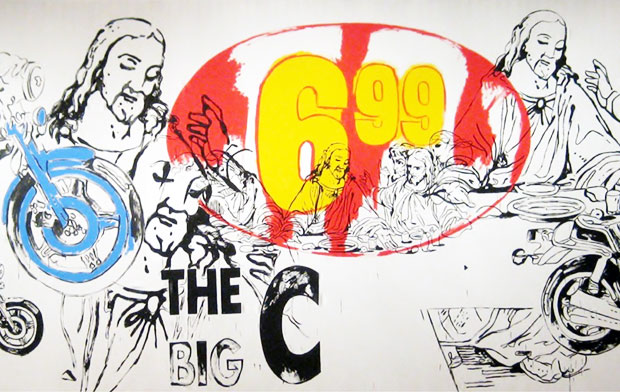 For greater insight into Warhol’s art and life browse through our wide array of Warhol titles, which include this collection, this great compact introduction, this massive overview, this snappy celebrity portrait collection, and if you want to avoid any costly errors: this comprehensive, multivolume catalogue raisonné.

You can also browse through over 100 other Andy Warhol Phaidon.com stories here.