Although it colourfully paid tribute to Germany's world cup trouncing of Brazil last night, if you’re among one of the thousands of visitors to have passed through the Empire State Building this month, then you may have noticed some decidedly more monochrome footage of the buliding’s crown flickering on a screen in its lobby.

This is of course Andy Warhol’s film, Empire, one of his earliest, and most influential art-house movies, and it was shot fifty years ago this month. The building is marking the occasion with a month-long exhibition in the lobby, and a special illumination on the evening of 25 July, when thousands of sparkling white lights will light up the building in recognition of the night, in 1964, when Warhol and his cinematographer Jonas Mekas first trained their lens on the skyscraper.

Why is the film important? Well, here’s the respected curator and art historian Joseph D Ketner II writing about the movie in our Andy Warhol Phaidon Focus book.

"Empire is a classic example of Warhol’s early work in film. He ignored Hollywood conventions by making a film that contained a single image for an extended period of time. Warhol said, ‘I never liked the idea of picking out certain scenes and pieces of time and putting them together, because… it’s not like life… What I liked was chunks of time all together, every real moment.’

Ketner goes on to explains that “from the dusk of 8 p.m. into the darkness of 2:30 a.m., Warhol captured the changing lights of the towering structure and the sky above. When Warhol premiered the film, unedited, the following March, he projected it in slow motion, bringing its length to over eight hours.

“By projecting his images in slow motion, he altered the experience of watching films, emphasizing the principal aspect of cinema: time. His films instantly became cult legends in underground film circles and within a year he earned the ‘Independent Film Award’ from Film Culture, the avant-garde film periodical edited by experimental filmmaker Jonas Mekas. 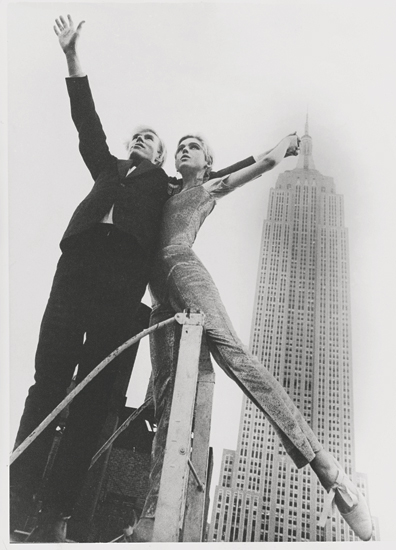 According to Ketner, “Warhol’s filmmaking was radical in its reduction of the medium to its fundamental properties: a stationary camera with no pretensions to narrative or action. The effect is remarkably similar to that of his Pop paintings, especially the silver paintings that he produced at the same time. The installation of his silver Elvis paintings at Ferus Gallery in 1963 demonstrates how the multiples of Elvis, filling the frame on a silver ground, resemble the frames of a film projected across the wall. In the protracted stasis of Sleep and Empire, the ‘motion picture’ is practically reduced to an ‘immobile image’."

The novelty of Empire moved the Filmmakers’ Cooperative to award Andy Warhol the Independent Film Award in 1964. "Within a single year of picking up a movie camera, Warhol had reached the pinnacle of avant-garde film,” Ketner writes.

For more on the anniversary celebrations go here; for a richer understanding of the artist and his work, consider our Phaidon Focus book, our thoroughly comprehensive Catalogue Raisonné, our sumptuous Giant Size, and our many other Warhol titles. If you like Warhol you're in the right place.

More on The Empire State's twinkling tribute to Warhol