Less is more when it comes to rock covers, or so claims The Rolling Stones singer in his brief to Warhol

One was the singer and creative powerhouse behind one of the most successful band on the globe; the other was the world's greatest pop artist. Neither could be expected to receive unbidden instruction and so in his letter, dated 21 April 1969, Mick Jagger leaves the question of the band's cover design in Andy Warhol's “capable hands.”

Much has changed in the 44 years since Mick signed off on this missive, yet Adam Berger, Creative Strategist, Facebook, described the letter as “the greatest brief ever written,” at Engage, a conference about digital storytelling which took place yesterday at The Standard Highline hotel in New York. 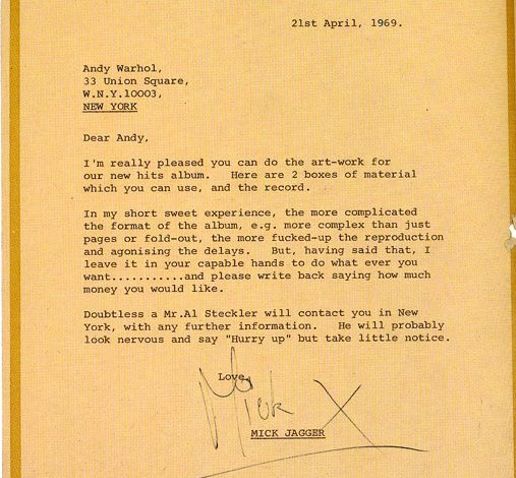 The conversational tone, trust in a fellow artist's talents, and blasé attitude towards fees all mark Jagger out as a canny operator. In truth, some modesty was justified; Warhol had worked on numerous cover images for the likes of Blue Note Records while employed as a commercial artist, before going onto produce his more famous Peel Slowly and See cover image for The Velvet Underground's 1967 début.

What is perhaps more intriguing is that Warhol did not go onto design the band's “new hits” album, as Mick suggests; the cover image for that LP, Through the Past, Darkly, released in September 1969, was a simple group shot, taken by Californian photographer Ethan Russell.

However, Warhol, did maintain his relationship with the band, and went onto design the image for their following studio album, 1971's Sticky Fingers. This cover, of a well-endowed man's crotch in tight jeans, featured a working zip and belt buckle in early pressings, and is now regarded as one of modern music's more striking pieces of graphic art. 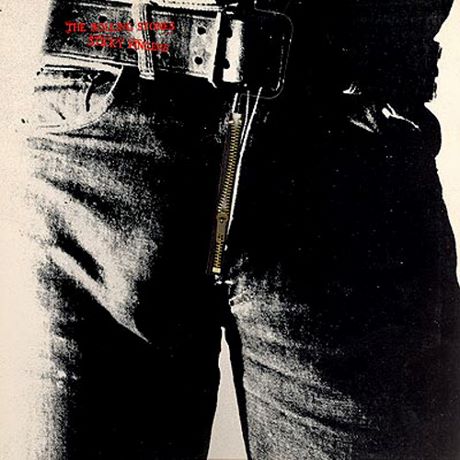 The image was banned in both Spain and Russia – the Spanish cover had some fingers emerging from a tin a treacle – and record store clerks complained that the zip could scratch the vinyl. Nevertheless, the album went to number one immediately in both The US and The UK, proving, perhaps, that both Warhol and Jagger's great understanding of both art and commerce.

To learn more, read this great post from tech business journalist Michael del Castillo; for further insight into Warhol's working practices, consider our wide array of books on the artist, and for more graphic design, see our wonderful Archive, featuring 500 works from the past 500 years.

More on How Jagger briefed Warhol