Hot on the heels of the Chapman Brothers show which opened at the State Hermitage Museum in St Petersburg  a couple of weeks back, the museum's modern art wing is now playing host to an entire room devoted to the work of Dmitri Prigov, the pioneering poet and conceptual artist who died in 2007.

The latest display is part of an initiative by Dmitri Ozerkov, the head of the Hermitage’s contemporary art department, to open a dozen or so rooms devoted to contemporary artists. These will including Sol LeWitt and Ilya and Emilia Kabakov, the Russian-born, American-based environment artists.

Ozerkov calls Prigov, who combined poetry with drawing, music and theatrical performance, “an artist unique first of all for his syncretism (the combining of different, often seemingly contradictory, beliefs, often while melding practices of various schools of thought)."

The Hermitage showed its Prigov collection at last year's Venice Biennale. “He is one of the few from the Moscow art scene of the 1970s, 80s and 90s who created his own unique world, a kind of intuitively discernible parallel world, the deep meanings of which are yet to be understood,” said Ozerkov. 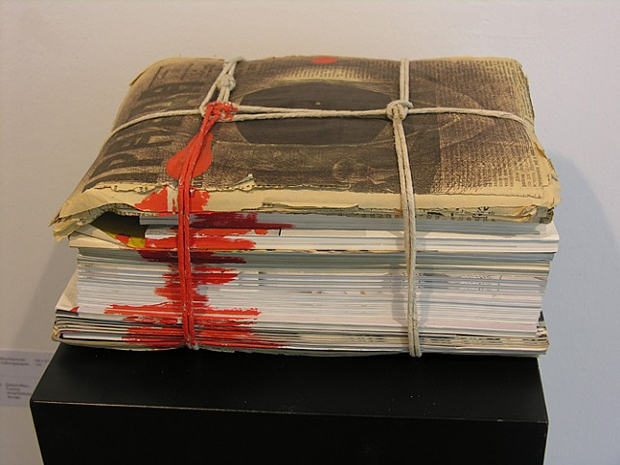 The Jake and Dinos Chapman exhibition, The End of Fun, which saw the artists recreating a chamber of horrors with thousands of miniature figures, many dressed in Nazi uniforms, engaged in various acts of violence, caused a stir in the press when it opened at the Hermitage a few weeks back. Ozerkov described it at the time as “anti-Fascist”, and said that it had been organised to highlight issues important to contemporary Russia - especially to a city that still vividly remembers the horrors of the Nazi blockade of the Second World War."

“These are interesting and relevant artists for us,” Ozerkov said. “They understand themes of violence, cruelty and the consumer society." An exhibition of engravings and drawings by Francisco Goya is being shown in a parallel exhibition alongsiude torture weapons from the Hermitage Arsenal.

The General Staff building, which includes displays from the Hermitage’s historic collections, is undergoing a huge $200 million restoration and modernisation project including the installation of a new, state of the art,  lighting system ahead of the museum’s 250th anniversary in 2014. Phaidon of course, has it's very own Art Museum where the light, if we say so ourselves, is always perfect.