Get a world of great food, all without one irritating element, via our Gluten-Free Cookbook

Open up The Gluten-Free Cookbook, and you are unlocking a world of great recipes. Chef and author Cristian Broglia has crisscrossed the world during his career, collecting together excellent recipes. In this new title, he goes through those dishes, filtering out the dishes with gluten-rich ingredients (often wheat flour), to deliver a distillation of world cuisine without that one (often challenging) element.

Many of the chosen dishes come from places such as India and South America, where gluten-free carbohydrates, such as maize and rice, are popular. However, he’s also alighted on other ingredients, including yams, coconut flour, and yuca roots, as well as the novel, chief ingredient in Japan’s delicate shirataki noodles stir-fry with mushrooms. 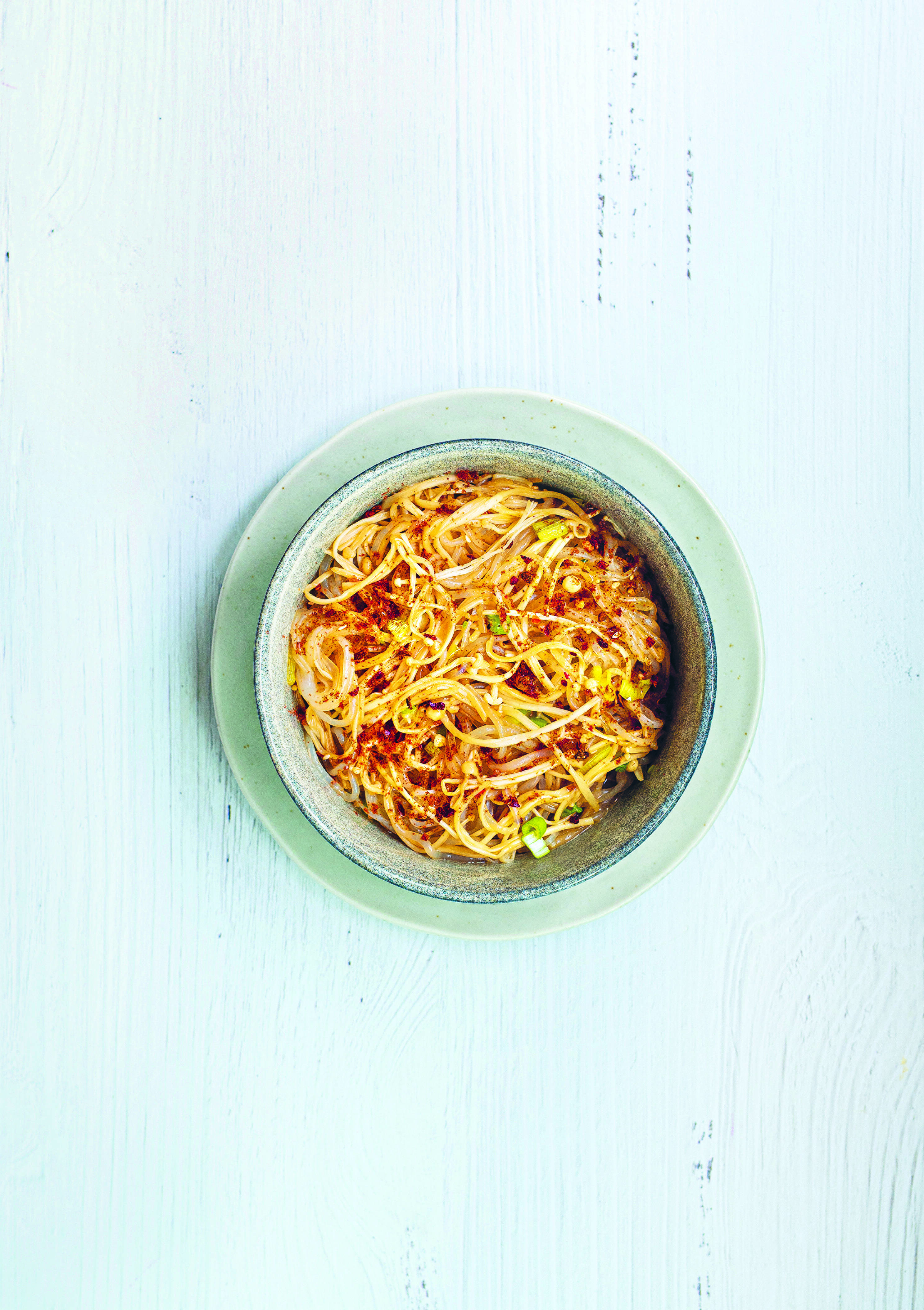 “Shirataki noodles are made from the starch of the konjac root,” he writes. “The extracted starch is mixed with an alkaline solution to form a gel, which is extruded in thin strands into boiling water. You can buy cooked and softened shirataki or you can buy the dried form, which is what we are using here.”

Aside from those noodles, the recipe calls for tamari; rice vinegar; fresh red chilies; sesame oil; enoki mushrooms; scallions; and some shichimi tōgarashi or Japanese seven-spice blend. In a bowl, stir together the tamari, vinegar, and chilies. Then, in a pot of boiling water, cook the shirataki. In a frying pan, heat the sesame oil/ Add the shirataki noodles and stir-fry. Add the enoki mushrooms and cook to soften. Add the scallions (spring onions) and the tamari mixture and cook for seven minutes. To serve, divide among four plates. Sprinkle the shichimi tōgarashi on top. 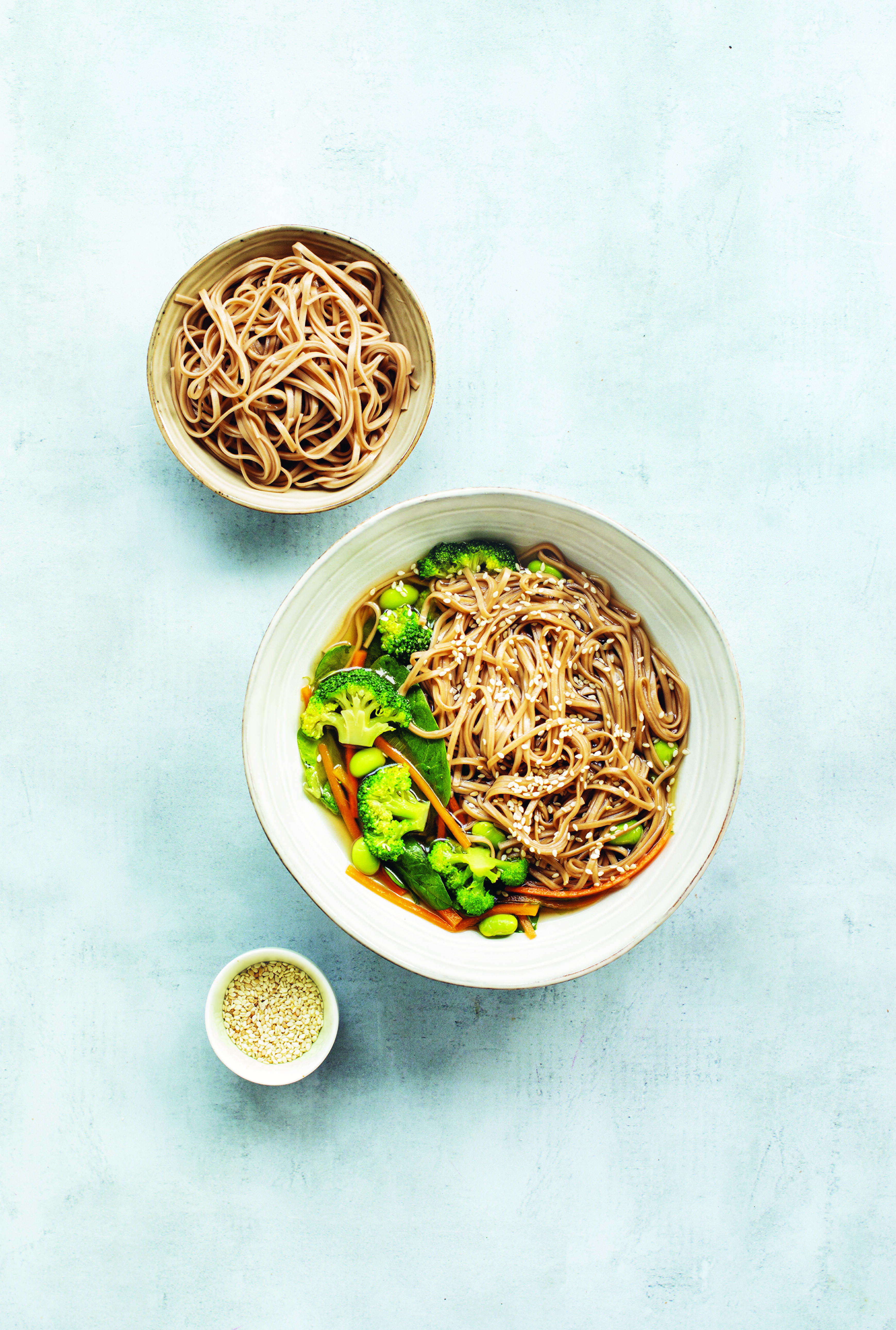 Broglia has also included the equally delicate Japanese dish, miso soba soup – though for strong anti-gluten adherents, he includes a key caveat. “When buying soba noodles, read the label to be certain that they are 100% buckwheat flour,” warns the chef, “as many brands add some wheat flour to the noodle dough to give them more structure.”

Cook the soba noodles until al dente. Drain and rinse and set aside. In the same pot, heat the sesame oil. Return the noodles to the pot and toss to coat with the oil. Remove from the heat. In a soup pot, heat the canola (rapeseed) oil over low heat. Add the garlic, ginger, and scallions (spring onions) and sauté until fragrant. Add water and bring to a boil. Add the broccoli, carrots, kale (cavolo nero), and edamame and simmer. In a small bowl, blend the miso with a spoonful of hot water from the soup pot, then stir the miso into the soup. To serve, divide the noodles among four bowls. Pour the soup over the noodles and sprinkle sesame seeds on top. 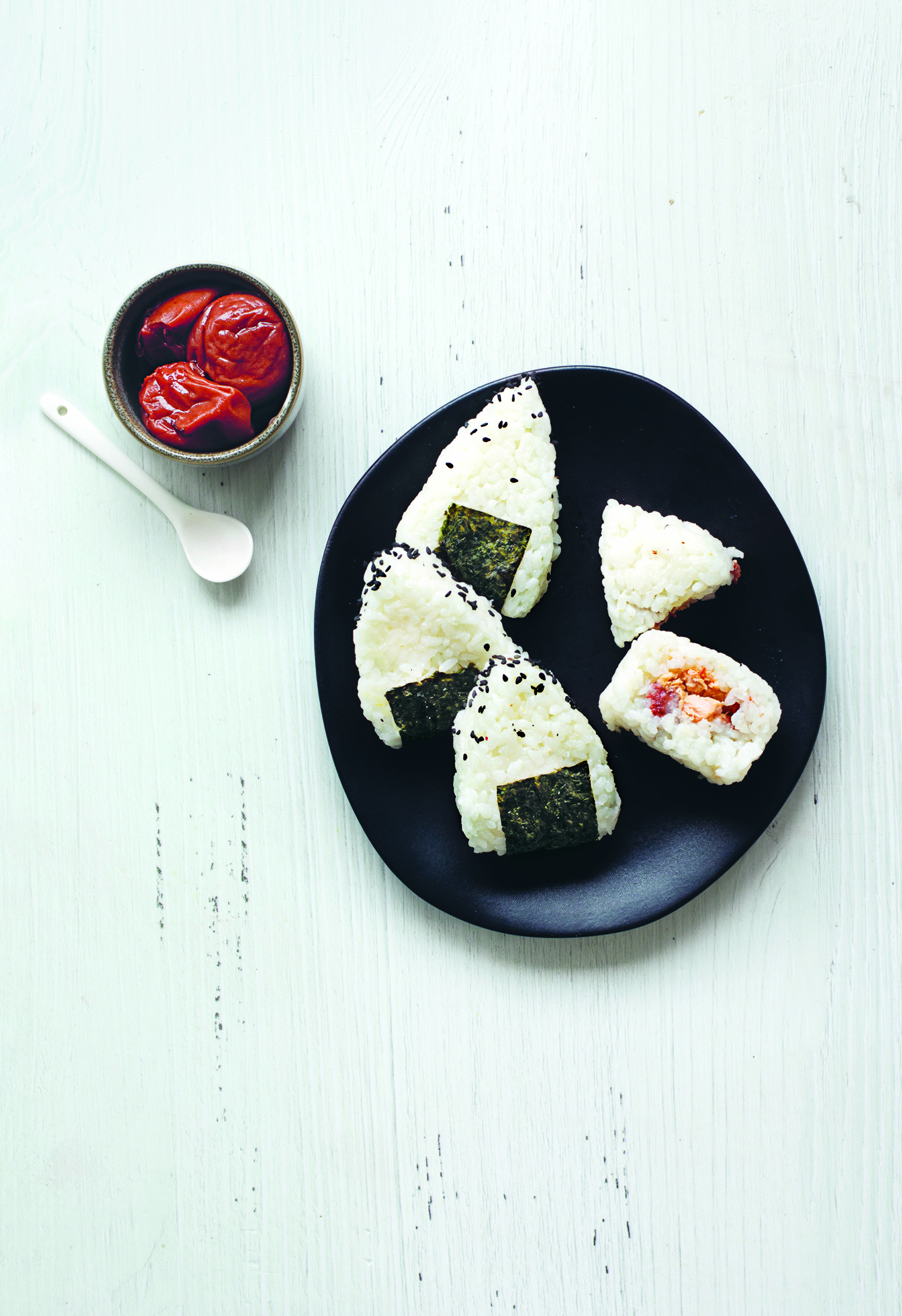 Rice balls with salmon and umeboshi

There’s also a warning when shopping for the Japanese starter, rice balls with salmon and umeboshi. There’s sake in this dish, and Broglia advises cooks to buy a premium bottle of this Japanese rice wine, “as the cheaper versions sometimes contain gluten.”

Arrange the salmon in a baking pan and roast until just cooked through. Break the fish into small pieces. Transfer to a bowl and add the sake, tamari, superfine (caster) sugar and ginger, and set aside. Rinse the rice and drain it well. In a saucepan, combine the rice and boiling water. Cook over medium heat until the rice is tender and all the liquid is absorbed. Spread the rice out in a bowl. In a separate saucepan, combine the vinegar, granulated sugar, and salt and heat over medium heat until the sugar has dissolved.

Sprinkle the vinegar mixture over the bowl of rice and gently toss until all rice lumps break. Allow the rice to cool down. With wet hands to prevent the rice from sticking, roll some of the rice into a ball. Create a cavity in the middle and fill it with a teaspoon of umeboshi or salmon. Top with a bit of rice. Reshape the rice into a pyramid shape. Wrap a strip of seaweed across the bottom and up the sides of the onigiri, pressing it lightly into the rice to adhere. Repeat until all the rice and fillings have been used. To serve, place the onigiri on a plate. Sprinkle the sesame seeds on top.

For full recipes, including weights and other measurements, as well as much more, order a copy of The Gluten-Free Cookbook here.

More on The delicate taste of gluten-free Japanese cuisine