The LA artist hopes to reveal hidden depths at this year’s New York art fair, via her Frieze Projects commission

If you’re going to the Frieze New York Art Fair then you probably know that it takes place each May on Randall’s Island Park in the East River, just off the north-eastern shore of Manhattan. If you’re a local, perhaps you know that the island was named after an eighteen century farmer who once owned this land. But do you know what it was called, before that? Minnehanonck, a Native American name which had been applied to Roosevelt Island, and has been translated as “Long Island” or “It’s nice to be on the island”.

These hidden meanings and lesser-known histories is something the Californian artist Samara Golden will be exploring in her installation at the 2015 art fair as part of Frieze Projects.

Golden, who lives and works in Los Angeles, makes alluring, baffling installations that draw on the likes of Paul McCarthy and Mike Kelley, and seek to reveal both different states of consciousness and social strata. Read on to learn how she hopes to strip away the façade at Frieze, using mirrors, lights and custom-made mannequins. 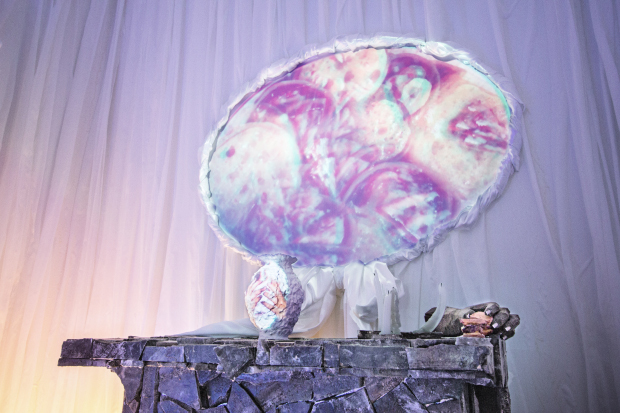 What are you doing at Frieze?  "I’m making an installation under the Frieze tent. It’s an infinity chamber; a 12ft x12ft space, with mirrors on three sides. There will be sofa outside the tent that a viewer can sit on to look into the space. Behind the sofa is another large mirror, so the viewer's reflection is caught inside the piece."

"I've also made 25 life-sized stuffed figures, with each side made from a different fabric, so they are sort of two-faced. The fabric designs range from repeated strips of bacon, to snakes, flowers, Native American-style bead patterns, money, flags, handcuffs, wallets and watches, Christian worship stuff, ammunition, alcohol, eagles, and so on. I'm painting faces on both sides of the figures, and some of them will have skeletons painted on them in transparent phosphorescent paint. There will be black light [UV light] emanating from the back of the piece. The idea is that you will see the front of the figures (one face) then the reflection of the figures in the mirror (second face) and then you will also see your own face (third face). Since it’s an infinity room, you will see those three faces repeated endlessly."

"Some of the figures that are reflected in the mirror will be faintly glowing skeletons. They're supposed to be a ghostly invisible presence. The patterns on the figures visually mingle, making it hard to distinguish one from another. As the viewer you are on the outside looking in. The installation is called “always smile at the mask of hate for it covers a sad face”.  It’s a line taken from a 1969 song called Bless the Executioner by the British band Kaleidoscope." 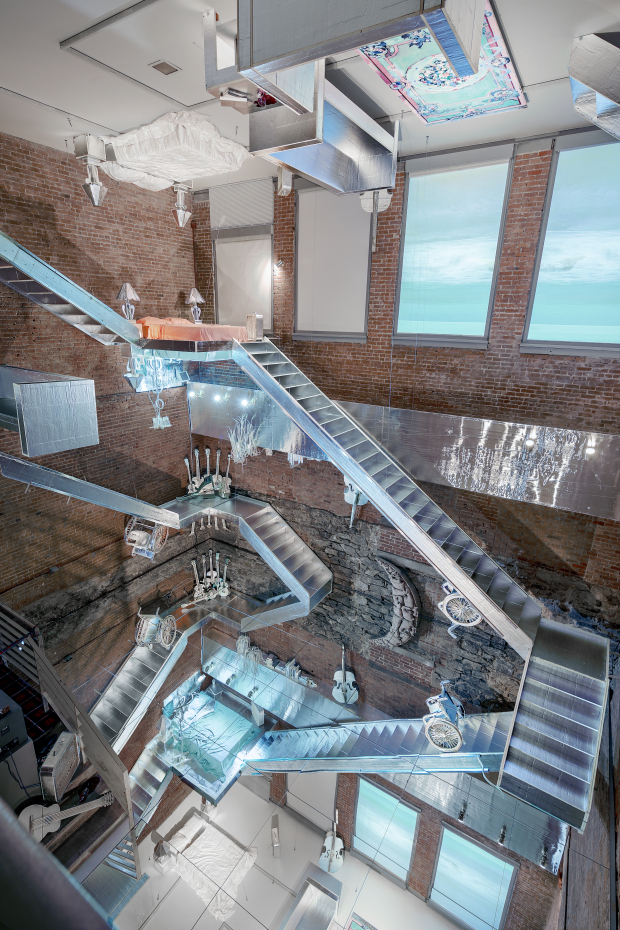 Why are you doing it? "Originally I just wanted to show the other side of the fair, or for my piece to be in opposition to the capitalist psychology of the fair. I’ve been thinking a lot about visualizing layers of consciousness in terms of space."

"To back up a little, I think of Randall’s island as a place of sadness; it’s interesting to find a piece of nature so close to the city, it sort of reminds you that you are on a piece of land, and following that thinking, I’m reminded of how it happens that we are on this land, and that we as Americans have this problem with realizing that we took this land in a violent and murderous way from the Native American tribes that were living here. It’s shocking to me that we rarely acknowledge this, nor do we seem to have much respect for the last remaining Native American peoples and their culture."

"As a kid I was really obsessed with my father's book of political cartoons, drawn by R. Cobb; they affected me greatly. One image depicted a family having Thanksgiving dinner; you just see their legs and the turkey on the table, and below them you see a cross section of the floor, then dirt and rocks below the floor, and then under that you see piles of bodies of Native American skeletons. I guess I thought of my piece as being in conversation with some of those ideas."

"My father told me that the people he knew at the time (hippies, politically radicals, rock ’n’ rollers) thought that R. Cobb's political cartoons were stating the obvious, and they were looking for something deeper. But it seems that now you would never even see something like that in a mainstream newspaper. It’s shocking to me how uncritical we all are, how much we all are resigned to thinking the world is just messed up, and there’s nothing to do about it. It seems to be a dominant thought that we are powerless to the machine so in a worst case scenario people become either hard-core consumers or hermits. Sometimes it seems like we are a world of people only looking out for number one." 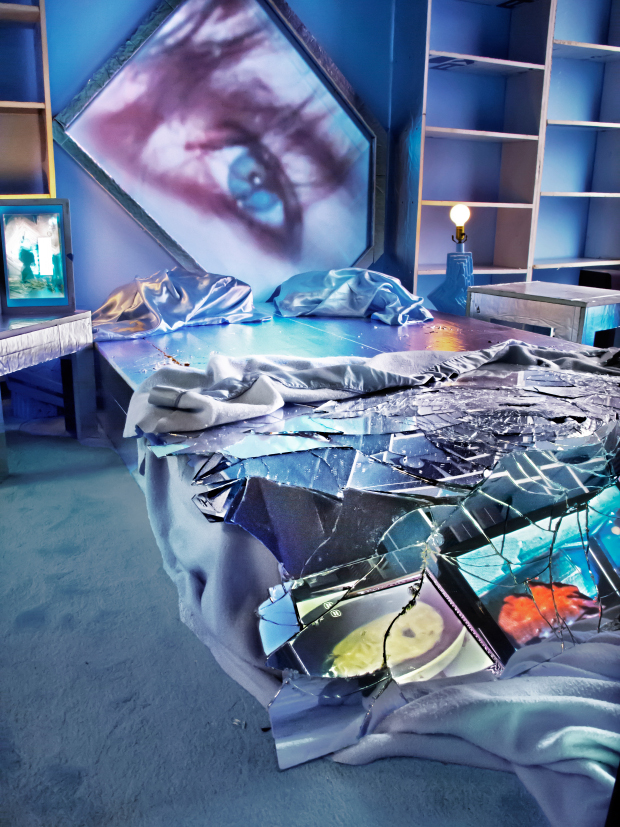 What does it mean? "To go into more detail, I’ve been thinking a lot about the concept of stratification, either social stratification, or the stratification of consciousness. I like the idea of making constructions of thoughts – i.e. thinking about layers of consciousness in terms of physical space. To me, social stratification would be exploring the idea of showing the underbelly of the fair, all the bloodshed in the process of making a modern society; all the souls sacrificed in wars, all the injustice in the world. It could also be interpreted as the stratification of the social classes, about how the higher classes are founded on the sweat and tears of the lower classes. In essence the piece would be everything that is not part of the fair."

"There’s also the stratification of consciousness too. That, to me, is the idea that what you are “seeing” could be a window into another place or time, it’s an impossible space, an architecture that doesn’t exist. Maybe it’s a place in the mind, a memory, a dream, a nightmare, or a thought that can’t yet be expressed in reality. It’s a psychological space." 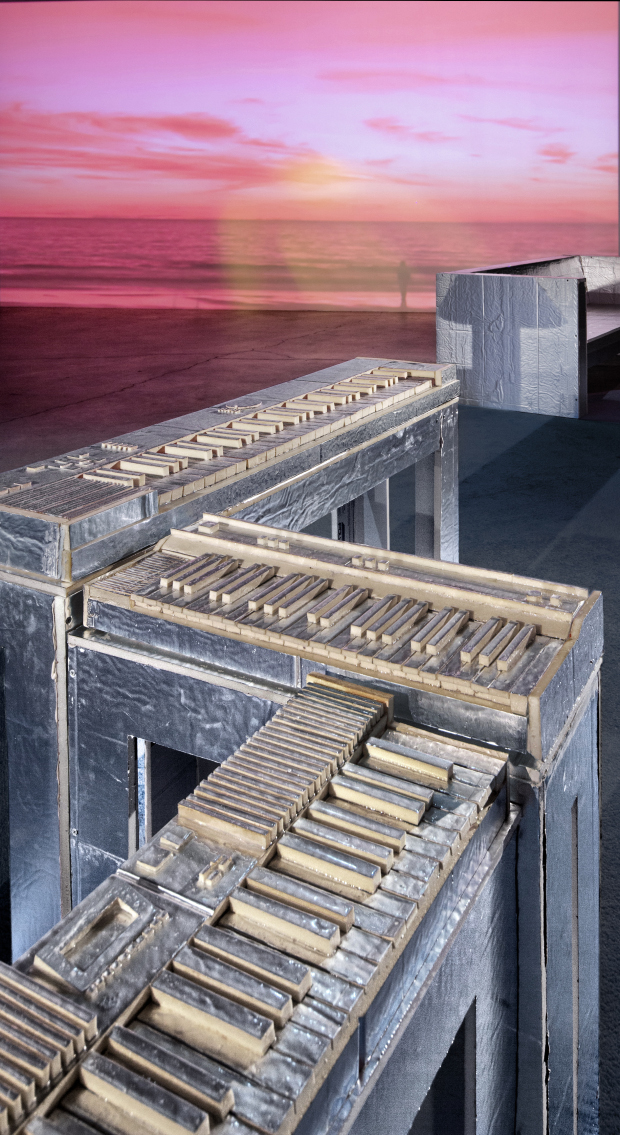 How does it fit in with your practice?  "The last project I did was a two-storey installation at MOMA/PS1 called The Flat Side of the Knife (on view until August). From a second-storey balcony you look down into the piece. The floor is mirrored so there is the illusion that the space goes down three stories. The architecture created in the reflection doesn’t really exist in the real world; in other words it’s visual, but inaccessible. Each level of that installation was a form of reality: I saw the top level (where the peach bed is) as representing “actual reality”, the green surgical bed on the middle level (actually a reflection of an upside green bed under the peach bed) could be seen as a suspended reality, or a space between life and death, and the bottom level (actually the reflection of the furniture on the ceiling of the space) could be seen as a peaceful place in your mind, or death, or a place that is safe. I was interested in the vertical articulation of these ideas."

"In a different way that is also what I’m thinking about for the Frieze project - the idea that on the top level is the fair: all the dealings of everyday life, all the reality of money, success, status, business, luxury, fantasy, etc., and that below that level lies something undefinable, something that haunts us, something more basic, or more psychological. It is also, put simply, the upper class on top of the lower class, or maybe it represents remembering how we built this world that we live in; maybe it’s just a place to see that division, or feel that pain."

Find out more about Samara Golden here; for more on Frieze Projects go here; and for more on one of her influences don’t forget about our Paul McCarthy and Mike Kelley monographs. 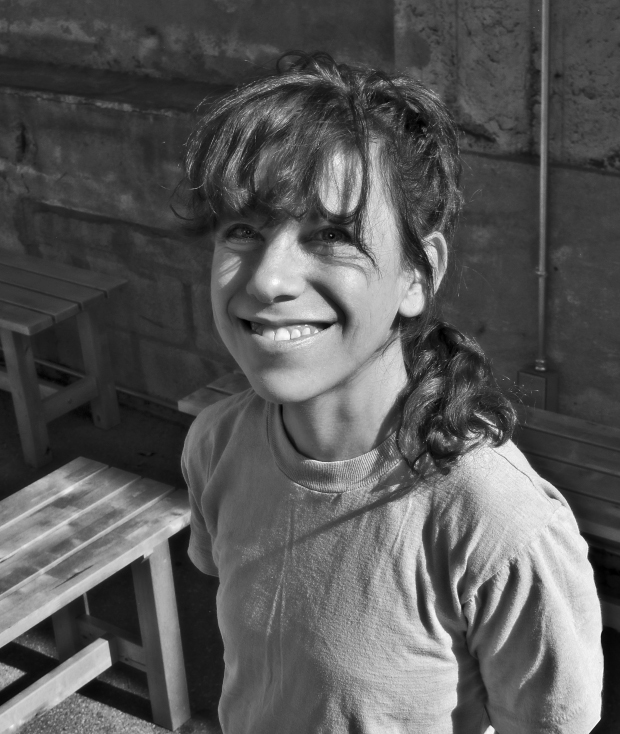