The food’s the thing at New York’s Eataly, the latest location of the immensely popular Slow Food emporium and Italian marketplace first opened by Oscar Farinetti in 2007 in Turin, Italy. The original enterprise was founded upon the principles of the Slow Food philosophy, with its emphasis on local, artisanal producers, food education, accessibility and affordability, and sustainable sourcing and production.

The New York branch, which opened in August in partnership with powerhouse chefs Mario Batali and Lidia Bastianich, is certainly dazzling in size, with numerous themed eating stations, including Il Pesce, which has a raw bar and features the seafood specialist Dave Pasternack of Esca, and Le Verdure, which centers on fresh produce. (Just one of the restaurants - a meat-centric paradise called Manzo - takes reservations). But on a recent visit I made to the new Slow Food superstore - if the scrum of shoppers intent on getting a table in the jam-packed eating areas was any indication - some of the movement’s more thoughtful values seemed to have taken a backseat to the sheerly secular and gluttonous pleasure of tasting everything in sight.

The new Eataly occupies the historic Toy Building on Fifth Avenue, on the west side of Madison Square Park. Upon entering its 50,000 square feet of real estate, be prepared for sensory overload; if nothing else, the restaurateurs have succeeded in creating a truly magnificent culinary wonderland. Meticulously arranged aisles showcase nearly a hundred varieties of olive oil (so many shelves!); dried pastas; aged balsamics; honeys and jams; and jarred sauces by Batali, Bastianich, and others. Almost everything is imported from Italy. There’s a fresh pasta counter, a gelateria, and a macelleria that offers 'Italian-American' beef from 'cows of Italian ancestry grazing in the grasslands of Montana'. There’s a laboratorio della mozzarella, where fresh mozzarella is made daily, and a pasticceria helmed by acclaimed pastry chef Luca Montersino. Three wood-burning ovens (one for bread and two for pizza) were shipped from Italy and installed on-site - along with six pizzaioli from Naples to man the ovens.

Its owners say that Eataly is designed to challenge the idea that quality products are only available to a select few, and that is a laudable goal. But it’s hard to erase the large environmental footprint involved in flying hard-to-find Italian products to New York, and the social justice component present in the original Eataly - where coffee was roasted locally by prisoners in a Turin training program started by Slow Food - isn’t immediately apparent in its sister site. But there’s time yet. A cooking school by Bastianich, La Scuola di Eataly, aims to introduce guests to the people behind the food; the calendar includes a class in responsible butchery with premier Manhattan meat purveyor Pat LaFrieda, and a farm-to-chef series with local producers that is set to launch in the spring.

In the end, there’s no denying the deliciousness of the enterprise. If you’re lucky enough to score a reservation at Manzo, you can escape the madness around you for the luxury of being able to focus on the food itself: gorgeous gulf shrimp with broccoli rabe, capers, and a bracing walnut pesto, fresh pappardelle with rich sausage and radicchio trevisano, carne cruda. It’s all exquisitely prepared, and servers are well-versed in the lengthy Italian wine list. The flavours may well transport you to Italy for the evening -- right up to the moment you muscle your way out of Mario's megalopolis and back out into the New York night.

Bonnie Tsui lives in San Francisco. She is a frequent contributor to The New York Times and the author of American Chinatown.

The Silver Spoon, the most influential and successful Italian cookbook of the last 50 years, is now available in a brand new revised edition. Originally published in 1950, it became an instant classic, selling over one million copies in eight editions. Considered essential in every household, it is still one of the most popular wedding presents today.

The Silver Spoon was conceived and first published by Domus, the design and architectural magazine famously directed by Giò Ponti from the 1920s to the 70s. A select group of cooking experts was commissioned to collect hundreds of traditional Italian recipes and make them available for the first time to a wider modern audience. In the process, they updated ingredients, quantities and methods to suit contemporary tastes and customs, at the same time preserving the memory of ancient recipes for future generations. They furthermore included modern recipes from some of the most famous Italian chefs, resulting in a style of cooking that appeals to the gourmet chef and the amateur enthusiast alike.

A comprehensive and lively book, its uniquely stylish and user-friendly format makes it accessible and a pleasure to read. The new edition features new introductory material covering culinary matters such as how to compose a traditional Italian meal, typical food traditions of the different regions, and how to set the table. It is also illustrated with twice as many newly commissioned photographs and contains a new section of menus by celebrated chefs cooking traditional Italian food.

This is a monumental and unsurpassably prestigious cookbook that will share the bookshelves with classic titles such as The Joy of Cooking and Larousse Gastronomique. With over 2,000 recipes illustrated with specially commissioned art work and photography, the book is destined to become a fresh and definitive classic in the Italian cuisine booklist.

"A seriously comprehensive guide that shows that Italian food is about for more than just pasta and pizza... One for serious Italophiles."—Gordon Ramsey, The Times

"The most successful Italian cookbook of all time."—The Financial Times

"It’s not so much one more Italian cookbook as the one-volume encyclopedia of Italian home cookery. Lavish illustrations, a helpful glossary of cooking terms and a translation geared to the intelligent layout make The Silver Spoon both pleasant browsing and an accessible manual in the kitchen."—The Wall Street Journal

"Big and bountiful, it’s a welcoming jumble of recipes... And by the looks of it, it may give cookbooks by American celebrity chefs a run for their money."—The New York Times Magazine

"A joy to cook from... May well prove to be the only Italian cookery you’ll ever need."—Henrietta Green, Daily Mail

"It's hard to imagine a more comprehensive resource of Italian classics."—Fine Cooking Magazine

"Accessible and a pleasure to read... When it comes to Italian home cooking, The Silver Spoon serves it up."—Costco Connection

"Italy's version of The Joy of Cooking... Presents lucid recipes for every dish a lover of Italian food could wish for - more than 2,000 of them."—Bon Appetit

"Without a doubt, this season's one indispensable cookbook is The Silver Spoon... Magnificent."—This Week

"A kitchen essential for anyone with even a passing interest in Italian food... If you're stuck for a Christmas gift idea for the foodie in your life, this is just the thing."—Sunday Business Post Ireland

"The Silver Spoon is as delicious to look at as the recipes inside."—Scotland on Sunday Christmas Guide

"A brilliant source of inspiration."—Delicious

"Time-honoured recipes that make this a one-stop reference book for traditional Italian cooking."—House and Garden

"Strongly recommended for cooks of all stages, culinary school students, and food lovers."—celebrity-books.blogspot.com

"The most exhaustive Italian cookbook in recent memory, this volume offers something for every cook, regardless of their skill level, and deserves to be a fixture in American kitchens."—Publishers Weekly

"We love The Silver Spoon cookbook from the 1950s – a staple in many Italian food lovers’ kitchen."—FamilyCirlcle

"This book is considered something of an authority on Italian cookery and is the bestselling cookery book of all time in its native land... For lovers of Italian cuisine it contains so much to inspire and delight. Well deserving of a coveted space on the kitchen shelf."—Woman's Way (Ireland)

"There's plenty to say about Italian food but very little that hasn't been explored in this vast tome. In essence it defines the ineffable conviviality that gives Italian fare its pizzazz." —Monocle

"...This is a bible for serious Italian chefs, but it's accessible for beginners, too. If ever you're at a loss for what Italian dish to cook, have this book at the ready for endless inspiration."—Forbes Online

More on 'The food's the thing' - Eataly, New York 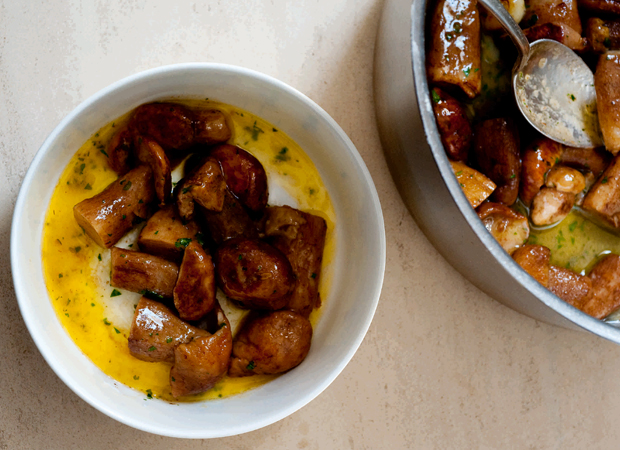 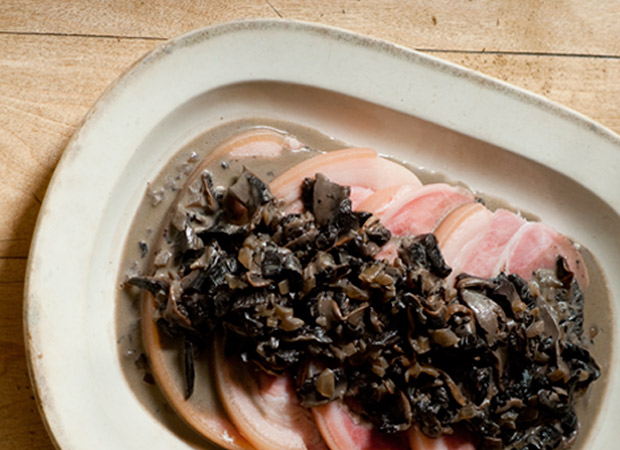 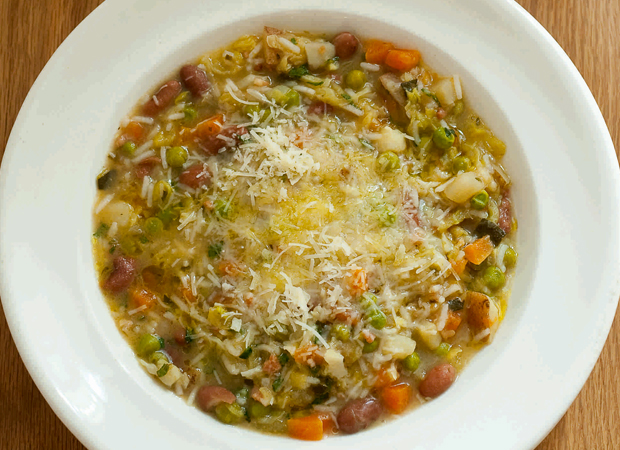 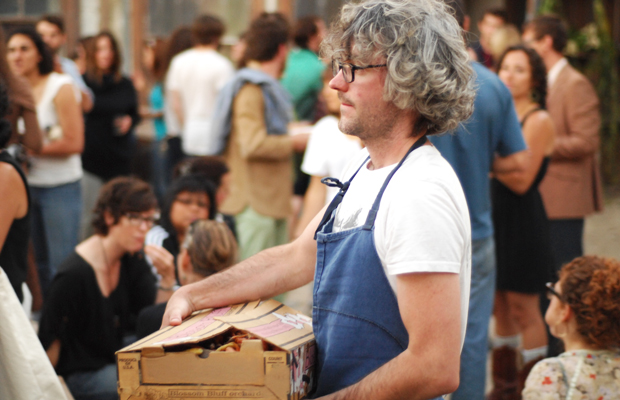 What does it mean to eat locally? Morgan Maki explains 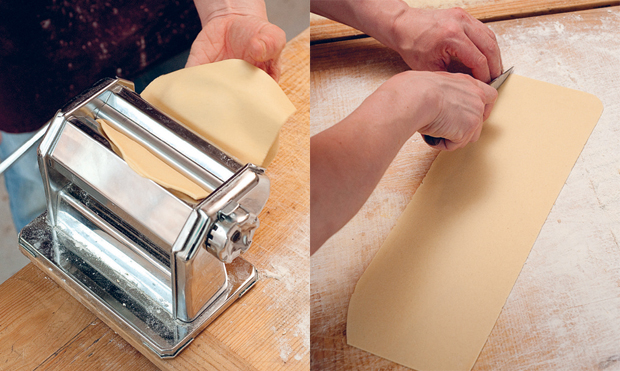 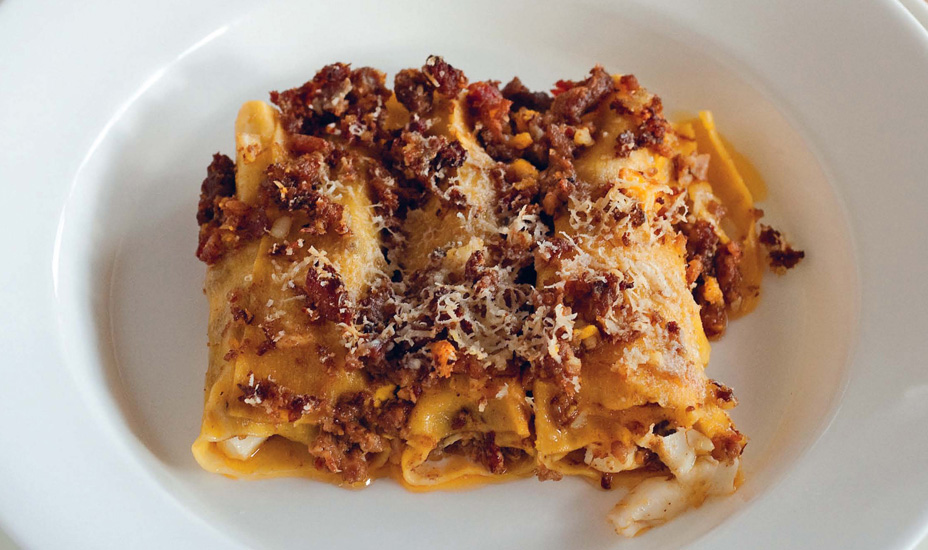 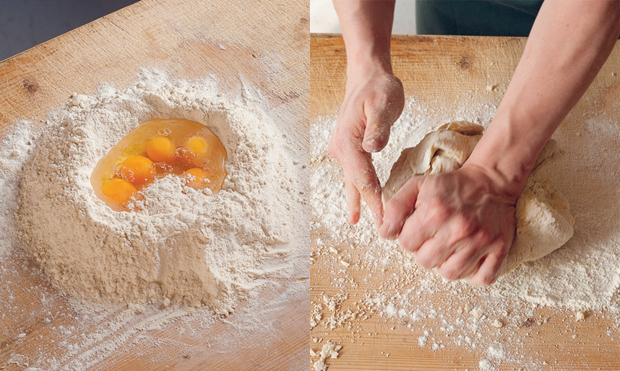 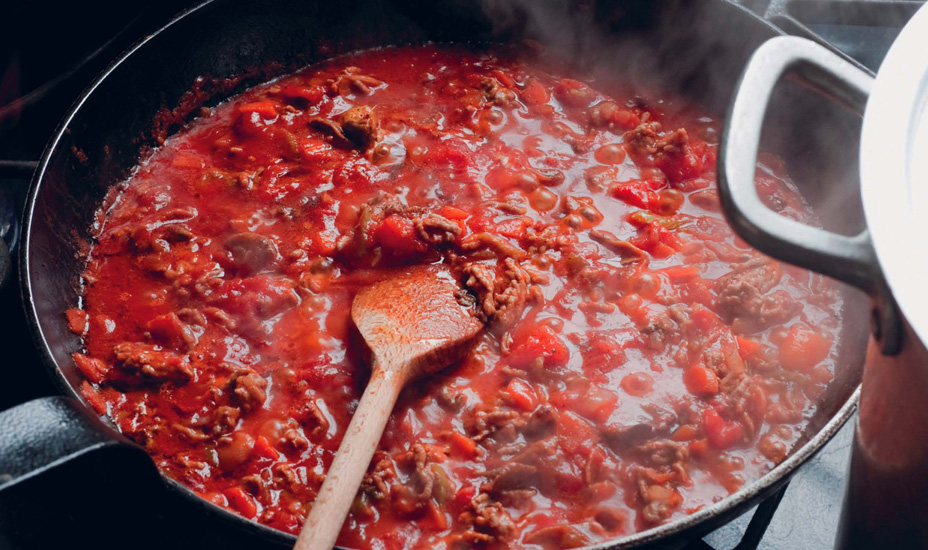 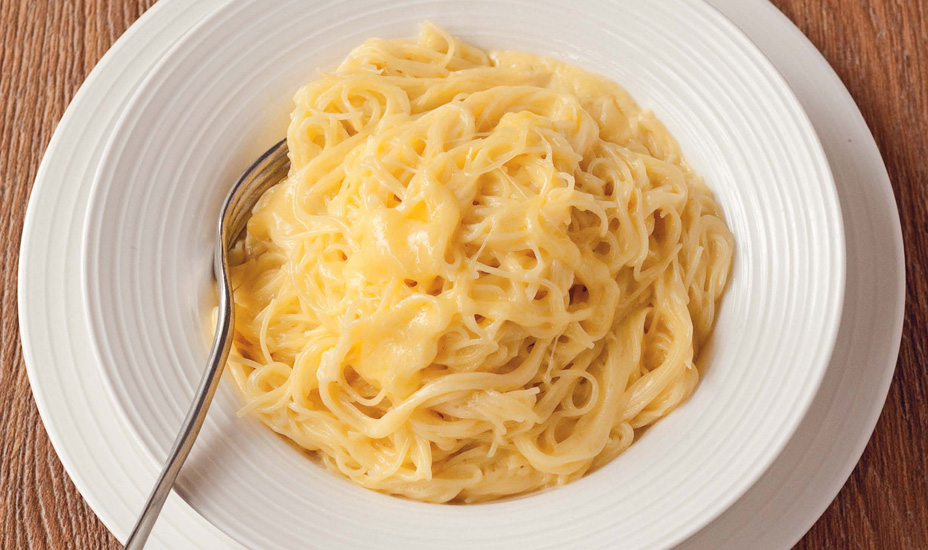 Capellini in cream and cheese sauce 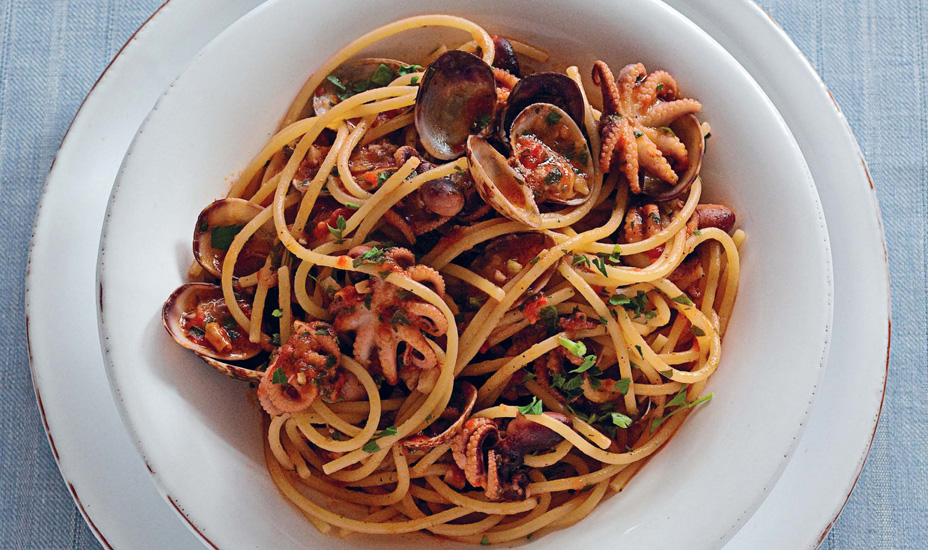 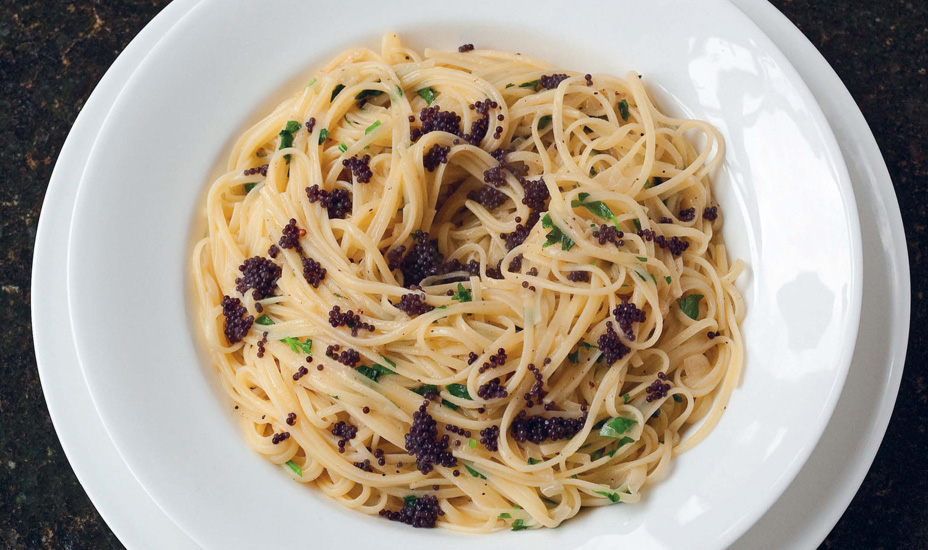 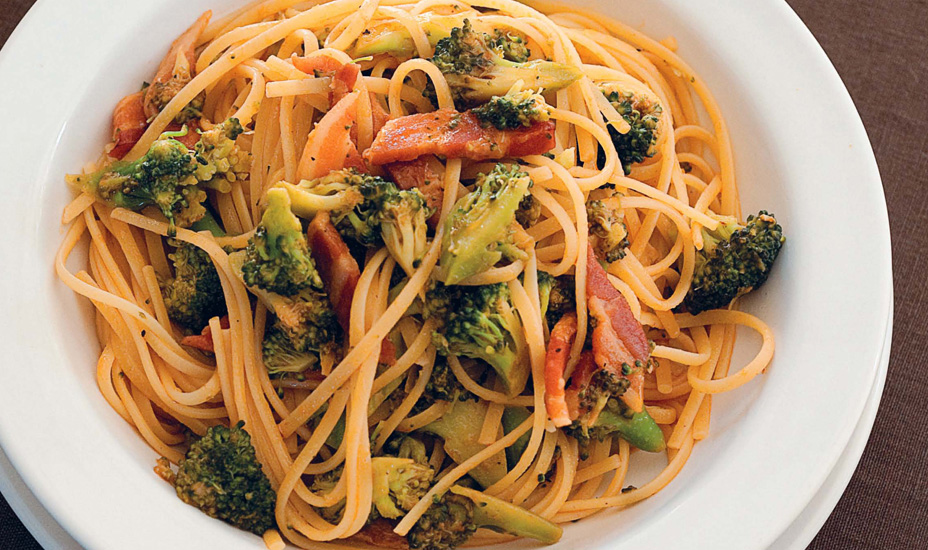 Linguine with broccoli and pancetta 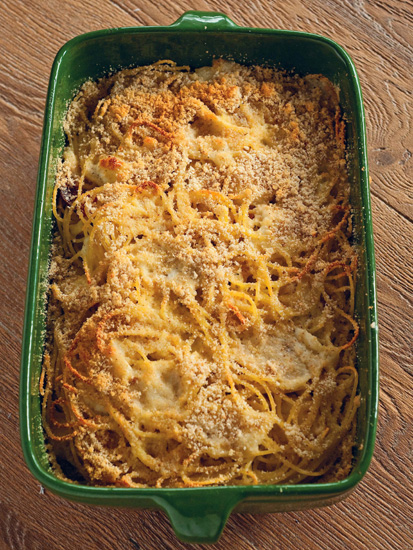 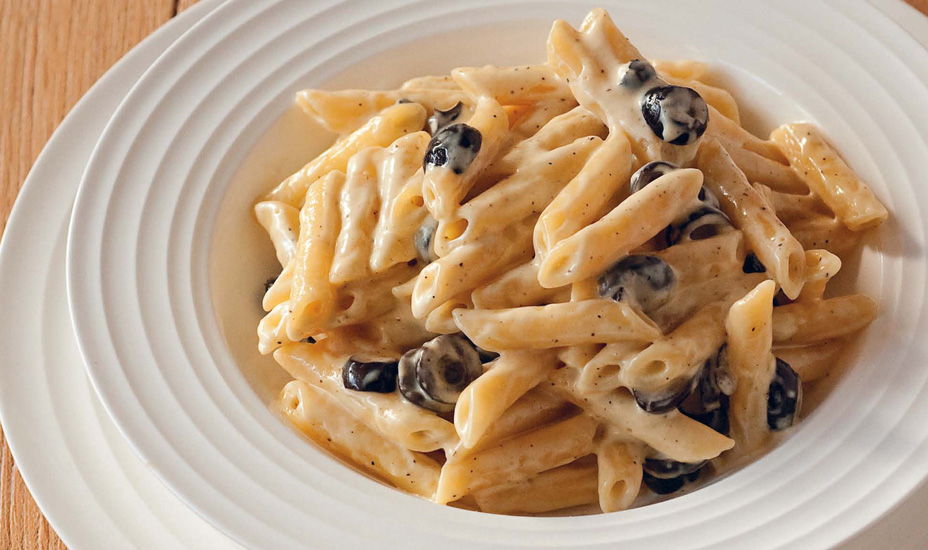 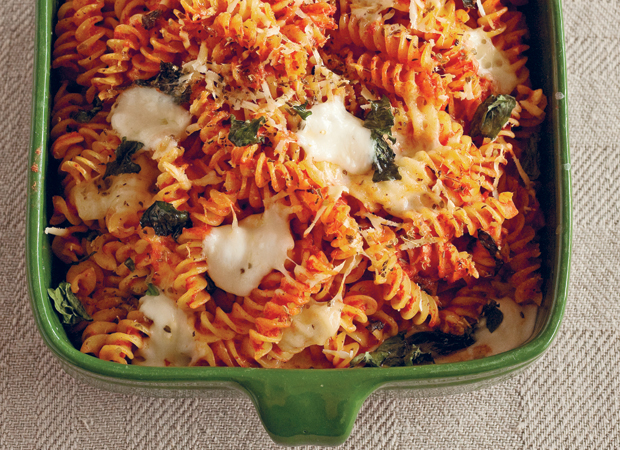 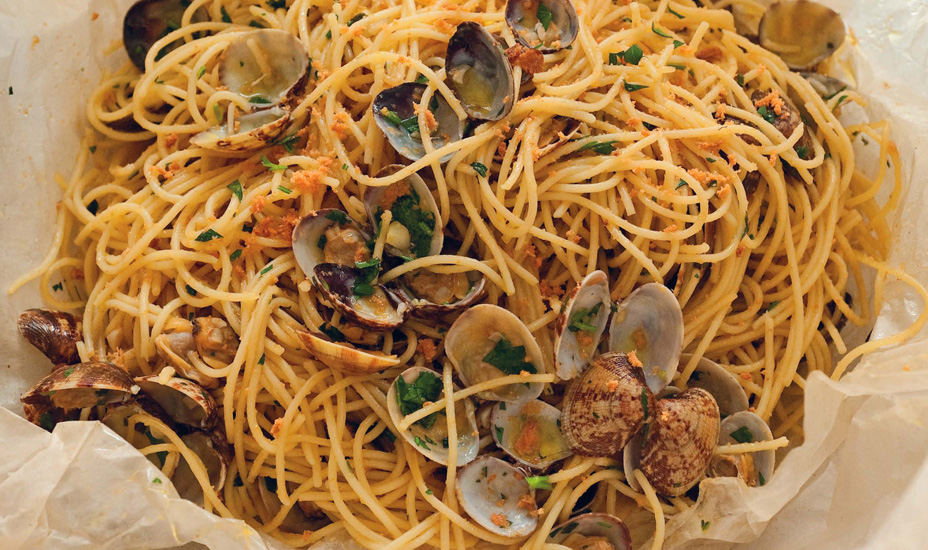 Spaghetti parcel with clams and bottarga 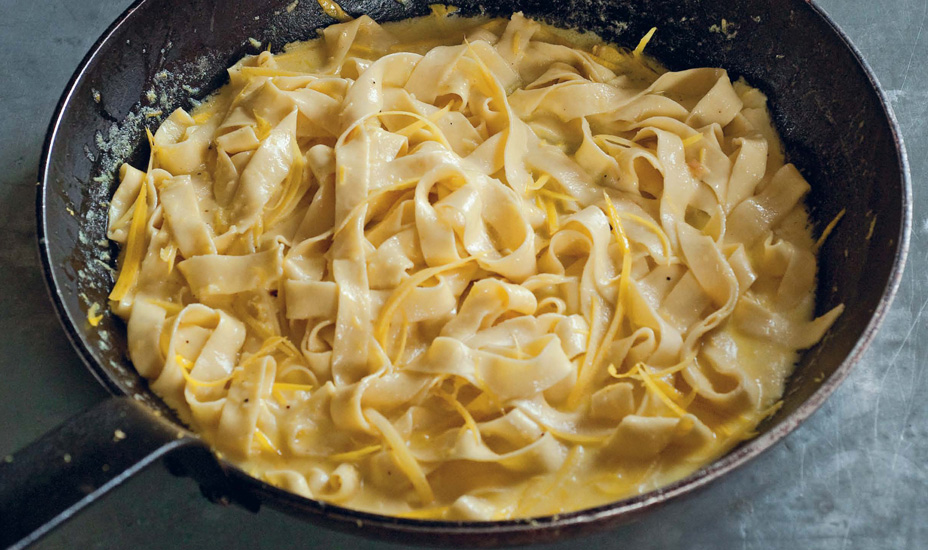 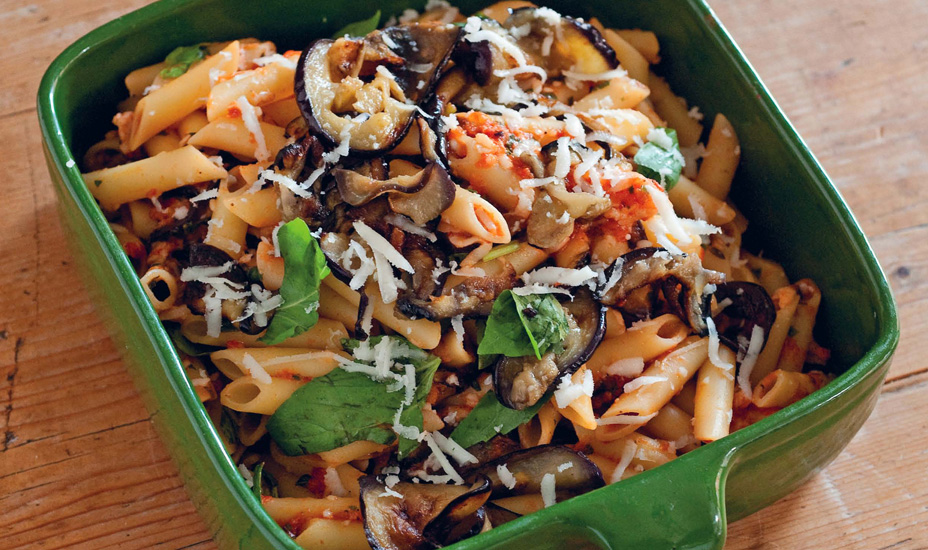 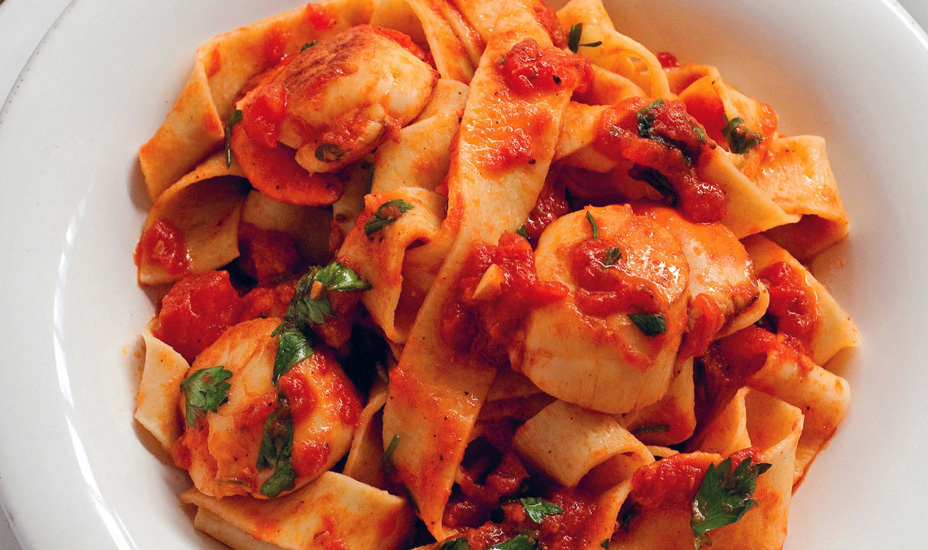 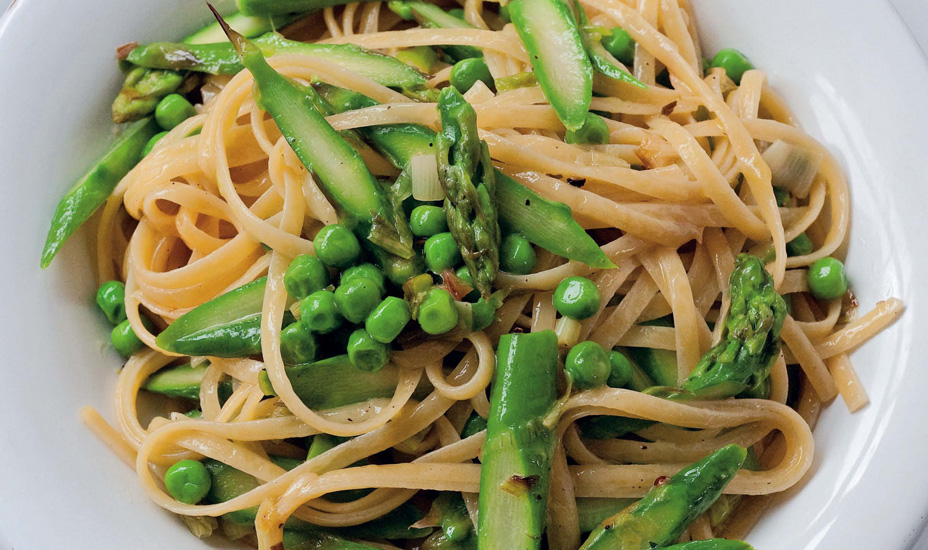 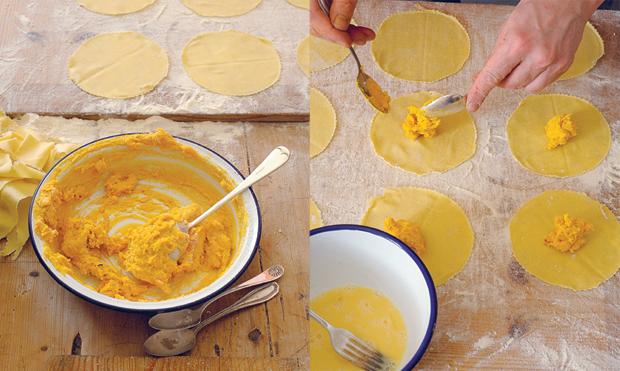 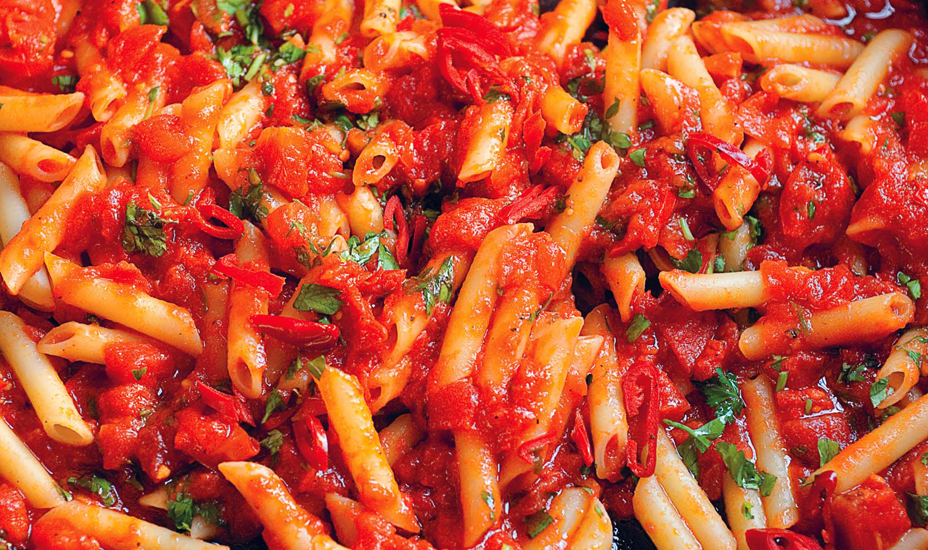 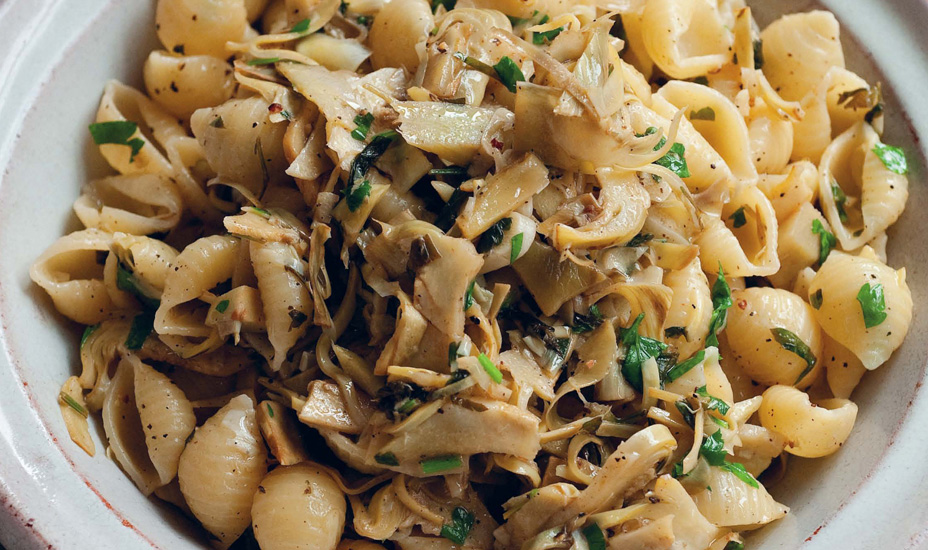 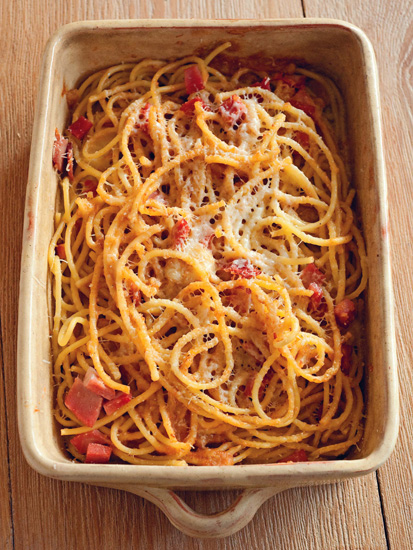