If there is an abiding symbol for the largesse of the doomed Russian Romanov dynasty, then it is the Fabergé egg. From 1885 right up to the start of the Russian Revolution, the St Petersburg jeweller Carl Fabergé made over 50 astonishingly intricate and opulent “Easter eggs” for the Romanovs.

One, made for the Emperor Nicholas to present as a gift to his mother in 1913, was carved from rock crystal engraved to simulate ice crystals and set with platinum-set rose diamonds. In case Nicholas’s mother should have been disappointed that that was all there was to it, the egg opened to reveal a ‘surprise’ - a platinum basket filled with white quartz wood anemones, with a garnet at the centre of each flower. It eventually sold at Christie’s New York for over $9.5 m (£6.5 m) in 2002.

Going Once: 250 Years Of Culture, Taste And Collecting At Christie’s is an endlessly charming, educative and fascinating volume, telling the story of the diverse array of items that have come under the hammer at the great auction house over the last two and a half centuries. It is also copiously illustrated, as an image of another Fabergé egg auctioned at Christie’s, the so-called “Rothschild Egg”, attests. 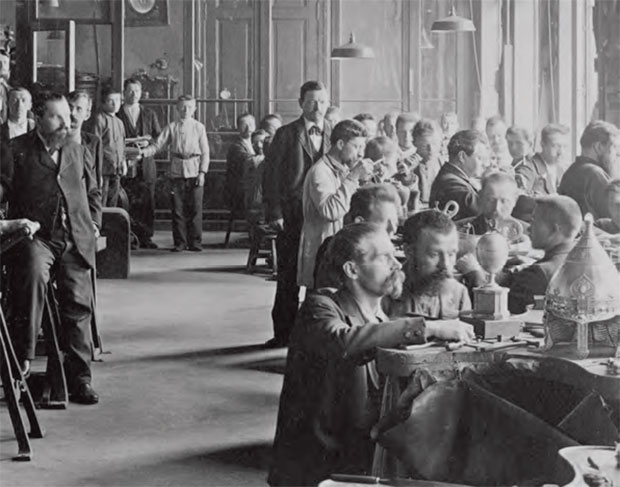 Michael Evamplevitch Perchin’s workshop in St Petersburg, 1902. The Rothschild Egg is on the table in the foreground, being worked on by two goldsmiths. Perchin, standing to the left in the photograph, was a Fabergé workmaster. From Going Once: 250 Years Of Culture, Taste And Collecting At Christie's

The Rothschild egg was made for another of Fabergé’s fantastically rich clients, Béatrice Ephrussi de Rothschild, in 1902, a present for her future sister-in-law Germaine. It’s a beguilingly extravagant piece, its calm, pink oval surface banded with seed pearls and stylised leaves. As the hour strikes, the top of the egg opens and from it emerges a cockerel, its plumage studded with tiny diamonds. It flaps its mechanical wings, then crows.

The egg did not leave the Rothschild family until 2007, when it sold at Christie’s for £8,980,000/$18,573,940, the highest ever price for a timepiece. It resurfaced in Russia in 2014 and was donated to St Petersburg’s Hermitage Museum - an example of the long, full circles in which history sometimes travels.

For more on this £9m egg and many more items besides, order your copy of Going Once: 250 Years Of Culture, Taste And Collecting At Christie's here.

Going Once: 250 Years Of Culture, Taste And Collecting At Christie's