Back in the 16th century, the line between artist and painter and decorator was rather more blurred than it is today, certainly in the upper echelons of society. And so it was that in 1508, a 25-year-old artist named Raffaello Sanzio, also known as Raphael, was summoned to the court of Pope Julius II to lend a hand in the redecoration of the Papal apartments. One of his jobs was to paint frescoes for the Pope’s library and private office, the Stanza Della Segnatura. The works he eventually produced are considered among his very greatest.

One of the frescos was entitled The Parnassus. Finally completed in 1511, it depicts Mount Parnassus, home to Apollo and the nine Muses. Raphael produced a preliminary cartoon for the fresco, Head Of A Muse. The small drawing, on which the artist could experiment with the details of the image, acted as a reference tool or the painting of the fresco. For art students, it acts as a fascinating document of Raphael’s evolving creative process during the completion of The Parnassus - the final version on the fresco differs subtly from the cartoon. For the lay onlooker, the drawing is a beautiful and distinctive art treasure in its own right. 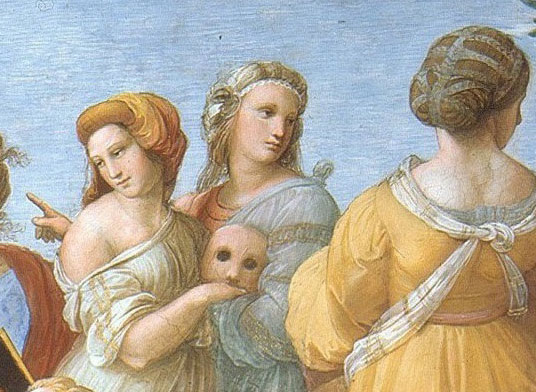 Detail from The Parnassus (1511) by Raphael

The work eventually came under the hammer at Christie’s in 2009. Its story is one of 250 told in the delightful Going Once: 250 Years Of Culture, Taste And Collecting At Christie’s, published to celebrate the 250th anniversary of the auction house.

Head Of A Muse was the subject of a veritable ding-dong battle at auction, with two bidders described as “clawing it out” like well-matched prizefighters in the final round of a bout. Finally, when the gavel struck and the winner was declared - an anonymous telephone bidder who paid £29m for the drawing, almost twice its estimated value - the serenity of Raphael’s muse contrasted sharply with the high-stakes tussle over its ownership.

For more on this beautiful work and much else besides order your copy of Going Once: 250 Years Of Culture, Taste And Collecting At Christie's here. You can also learn more about Raphael's life and work in this beautiful volume.

Going Once: 250 Years of Culture, Taste and Collecting at Christie’s

Going Once: 250 Years of Culture, Taste and Collecting at Christie’s Christie's