Going Once: 250 Years Of Culture, Taste And Collecting At Christie's is a fabulously rich volume that you do not have to be fabulously rich to acquire. Alongside the lavish illustrations you can learn about the cultural significance of the items the auction house has sold over the years and also the stories, often bizarre, which brought them to auction in the first place.

In 1965, Rembrandt Van Rijn’s Portrait Of The Artist’s Son Titus (c.1655) went under the hammer at Christie’s, eventually selling for 760,000 guineas, when that aristocratic currency was still de rigueur at auction houses. This in itself was enough for the portrait to make the cover of Time Magazine. However, there was a great deal more to the story of this sale than the price tag. In fact, it represented for auctioneer Peter Chance “the worst moment” of his working life.

As  is explained in Going Once: 250 Years Of Culture, Taste And Collecting At Christie's. The painting was part of the Cook collection, and as was customary, buyers chose their own bidding signals prior to the auction. In the case of American industrialist and collector Norton Simon, these turned out to be rather complicated. If he was sitting, he explained, he was bidding. If he stood up, that meant he had stopped bidding. If he sat down, however, he would only indicate that he was resuming bidding by raising his finger. At which point he was bidding. Until he stood up again.

These instructions proved rather confusing to Chance, who eventually brought down the hammer at 700,000 guineas. Whereupon a furious Simon stomped up to the rostrum brandishing his letter of agreement. It turned out Chance had missed his last bid. He was forced to reopen the bidding upon which Simon took ownership of the painting. 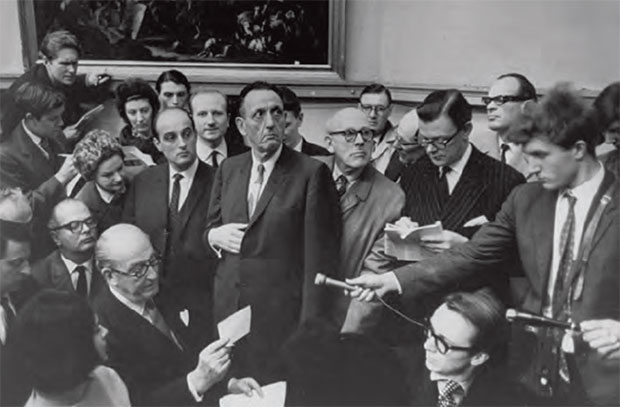 Industrialist Norton Simon, hand on his chest is surrounded by members of of the press and fellow collectors at Christie's King Street on 19 March 1965

Ironically, Simon had only insisted on his bizarre set of signals so as not to bring press attention on himself. This backfired somewhat as his angry protest made headline news, with accompanying photographs.

All of this contrasts with the story of how Rembrandt’s work arrived in Britain in the first place. In 1815, one George Barker, a picture restorer found himself staying at a farmhouse in the Hague. The painting was hanging there. Barker said he liked it, so the landlord threw it in with the price of his board - a shilling.

For more fascinating stories like this check out Going Once 250 Years of Culture, Taste and Collecting at Christie's in the store.