Our book Sun and Moon looks back at Ed White, the first American to spacewalk, on this day 3 June, in 1965

The men and women who made it into NASA’s space programme were chosen, in part for their discipline and ability to perform well under pressure. This was certainly so for lieutenant colonel Ed White, the test pilot and aeronautical engineer who, on this day in 1965, became the first American to take a walk in space.

White knew that his trip into space was a crucial part of his NASA mission, Gemini 4, as the Russian cosmonaut Alexei Leonov had already managed to spend a few minutes outside his capsule in March of that year, enabling the Russians to claim the world’s first spacewalk.

“White’s planned spacewalk, known in US terminology as EVA (extra-vehicular activity), was of paramount importance given the Russians’ achievement only weeks before,” writes Mark Holborn in his book Sun and Moon.

And despite all of NASA’s planning, the astronaut’s EVA was still fraught with difficulty. “White was able to apply thrust to his movements outside the capsule by using a pressurized oxygen gun, but, alarmingly, the gas was quickly dissipated. His camera, a Zeiss Contarex 35mm, was mounted on top of the gas gun. Gemini 4 was about to enter darkness, and White was urged to re-enter the capsule.”

However, in spite of his colleague James McDivitt’s instructions to return to the capsule, and the mission’s importance, the cosmic experience of floating in space overcame the astronaut. “White resisted coming in, claiming he had more pictures to take,” writes Holborn, before going on to quote from the mission’s transcript:

“‘Ed, come on in here!’ shouted his commander.

‘All right. Let me fold the camera and put the gun up.’

’Come on, get back here before it gets dark!’

‘Okay. This is the saddest moment of my life.’” 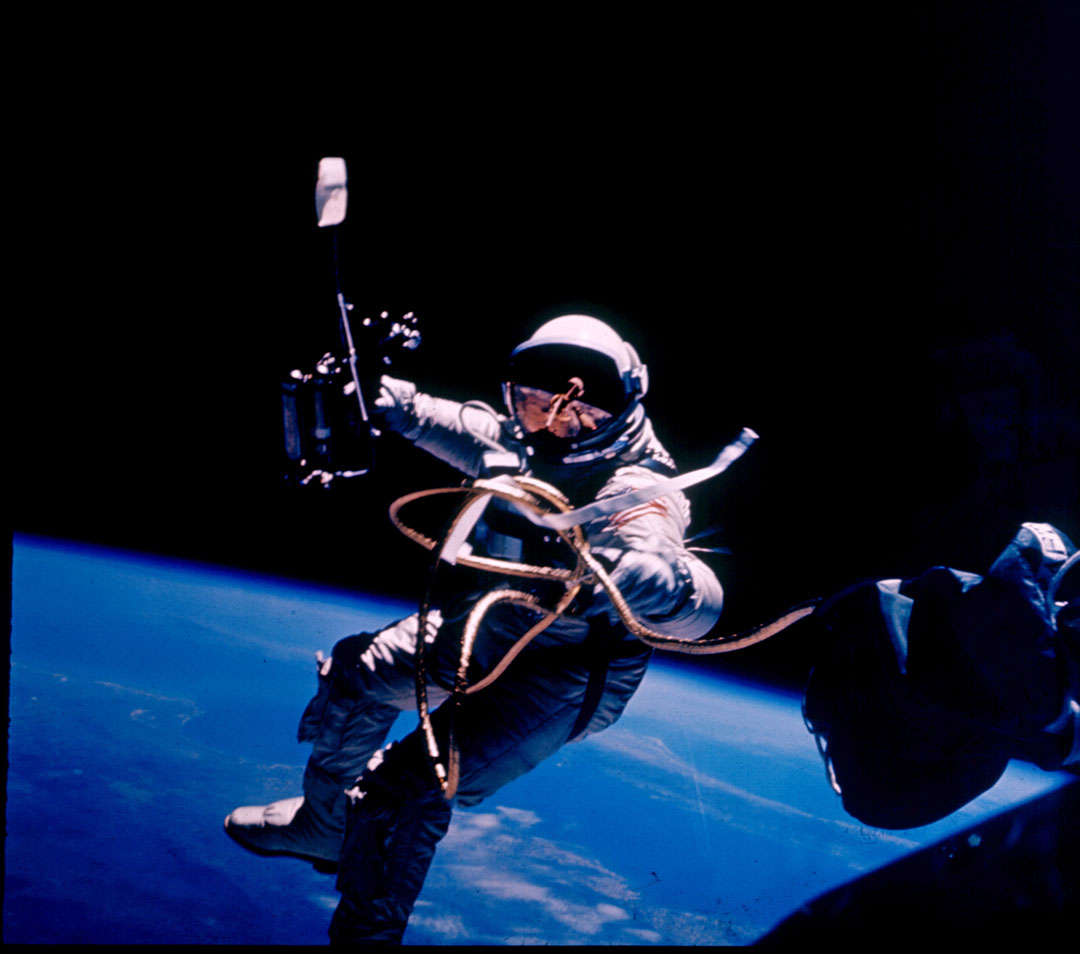 However, that feigned sadness could obviously have turned to something far worse, had the rest of the mission been conducted with anything but the utmost discipline. “A problem with a spring on the hatch had been resolved before White could step outside,” explains Holborn. “The spring had to be functioning correctly on their return, or their final descent would be fatal. The lives of the two astronauts could be described at that moment as depending upon the compression and extension of a minute component.

“During the performance of highly rehearsed operations, they had to maintain functional calm, though stress, anxiety and fear would have been natural responses. White’s reference to the emotional weight of the occasion when he had to step back to the interior, ‘the saddest moment’, remains the preeminent phrase in the course of the entire transcript.

“The overriding comment here was one of human emotion, doubtless derived from the experience of observing the home planet from beyond the line that separates the Earth’s atmosphere from outer space – at one point they orbited over Houston, and McDivitt pointed out Galveston Bay. More accurately, the sadness arose from being unable to continue the watch – gas gun and camera to hand – as one who had for those twenty-three minutes truly stepped outside.

“Unlike the subsequent Apollo 11 moon landing, there were no footprints in the dust. The movements of the astronaut’s limbs and the twisting of his torso beneath the helmeted head made the sea of space in which he turned all the more amniotic. He floated in the depthless expanse, joined by a single umbilical thread.”

White’s walk became all the more poignant just 18 month later, when, on 27 January 1967, White died in a fire during a launch rehearsal for the aborted Apollo 1 mission – the first in the ultimately successful programme to land a man on the moon.

Yet, though he died aged just 36, he lives on both in the history of space exploration and in the minds of anyone who has dreamed of floating above the earth. For a cosmic overview of White's place in space and human image making order a copy of Sun and Moon here.