Why is one of the earliest astrological maps drawn onto an Egyptian tomb ceiling? Sun and Moon explains

If you want to be reassured about your place in the greater scheme of things, or gather immediately practical information for life here on the ground, you probably shouldn’t study astronomy. The Earth is a medium-sized planet, within the Solar System, which itself is towards the edge of our galaxy, the Milky Way; and even the Milky Way isn’t especially big or central, in comparison to other galaxies within the Universe.

However, as Mark Holborn explains in his book Sun and Moon: A Story of Astronomy, Photography and Cartography, stargazing was once a more steadying, and useful activity.

“The mind constantly seeks the stability of a system,” says Holborn. “We are reassured by cyclical patterns. The reappearance of a star in the night sky signaled to early witnesses the coming rains, the swelling river and the fertilization of the fields. The calendar reinforced the regularity of the seasons, the fundamental basis for agrarian life.”

Perhaps this is why early man worked the passages of planets and stars into its belief system. “Mythology – a form of typology that gave divine scale to human form – provided explanations for what scientists would later confirm with observation and follow with definition” writes Holborn. “Myth stated the essential story. The related symbolic systems of astrology, divination and alchemy were retained right up to the Newtonian age, when belief and credo were superseded by explanation, measurement and the certainty of scientific laws.” 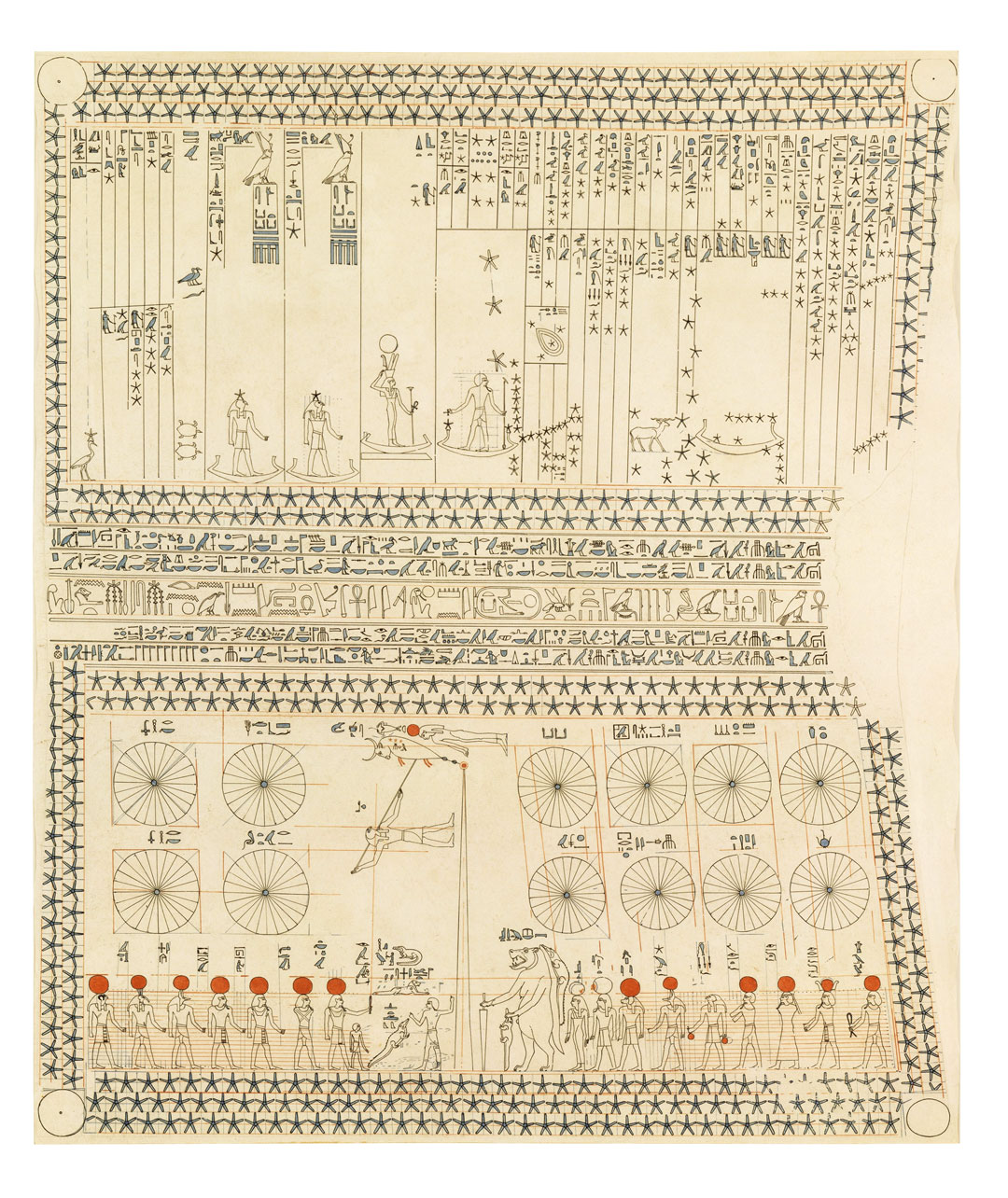 Charles K. Wilkinson, facsimile of the astronomical ceiling in the tomb of Senenmut, tempera on paper, original c.1479–1458 BC. Courtesy of Rogers Fund, 1948. As reproduced in Sun and Moon

Certainly, the Ancient Egyptians drew both mythical and practical lessons from the night sky. Holborn reproduces paintings from the ceiling of the tomb of Senenmut, the chief architect for the female Egyptian pharaoh, Hatshepsut. The building dates from c.1479–1458 bc, and lies in Deir el-Bahri, on the west bank of the Nile, near the entrance to the Valley of the Kings.

“This underground structure was constructed as a descending stepped corridor leading to three chambers, the second and third of which were unfinished and undecorated,” writes Holborn. “The walls and, especially, the ceiling of the first chamber were elaborately painted with an astronomical chart, drawn as if scaled up directly from a plan on papyrus. It is the earliest known astronomical ceiling Mythological deities were integrated with depictions of celestial observations.

“The ceiling is divided into two sections, northern and southern, by several lines of text containing the names of both Hatshepsut and Senenmut. The southern section contains lists of decans – groups of stars or small constellations used in Egyptian astrology, derived from lists written on coffins from the late Middle Kingdom (c.2050–1800 bc). The northern section comprises the earliest known depictions of the northern constellations and refers to four planets – Mercury, Jupiter, Venus and Saturn; Mars is absent. This section represents the lunar calendar through twelve discs corresponding to the twelve months of the Egyptian calendar. The segments of the discs represent the twenty-four hours of the day and the seasons of the year in accordance with the agricultural cycle.”

It’s a hugely impressive work, when you consider that all this was observed without the use of optical lenses. And while the chart was clearly a highly learned document, all that study had a highly practical application, as Holborn explains.

“The ancient Egyptian calendar was based on lunar cycles, but observation of the Moon did not provide the fundamental knowledge of when the Nile would flood – an event of great agricultural significance,” he writes. “The crucial signal was provided by Sirius, the brightest star in the night sky, which normally reappeared after a prolonged absence several days before the summer solstice and the arrival of the floods.” For more earthly tales and heavenly sights, order a copy of Sun and Moon here.

More on From the tomb to the Moon