Jimmy Carter might have linked the third of May to solar power, but the Sun has been central to earlier civilisations

Today, Friday 3 May, is actually Sun Day; 41 years ago, President Jimmy Carter added this designation to the third of May, following the success of Earth Day, in an attempt to raise the profile of solar power as a renewable energy source.

However, as our new book Sun and Moon: A Story of Astronomy, Photography and Cartography, makes clear, Carter’s America isn’t the first society to place enormous store by the power of the sun.

“In the Arab world, astronomical understanding was fundamental to the Bedouin tradition, as familiarity with the fixed stars and the passage of the Sun and Moon facilitated essential navigation in a desert landscape,” explains the book’s author, Mark Holborn. “In the Islamic world, knowledge of time and direction was necessary in order to find the qibla, the direction of Mecca. Confirmation of the times of sunrise and sunset was particularly significant during the month of Ramadan. The development of instruments, especially the astrolabe, was as essential for the demands of the calendar as it was for an understanding of the patterns of the constellations or planetary motion.”

Holborn focusses on the work of the tenth century Persian astronomer, Abd al-Rahman al-Sufi, who introduced much of the ancient Greek knowledge of the heavens to the Arabian world. 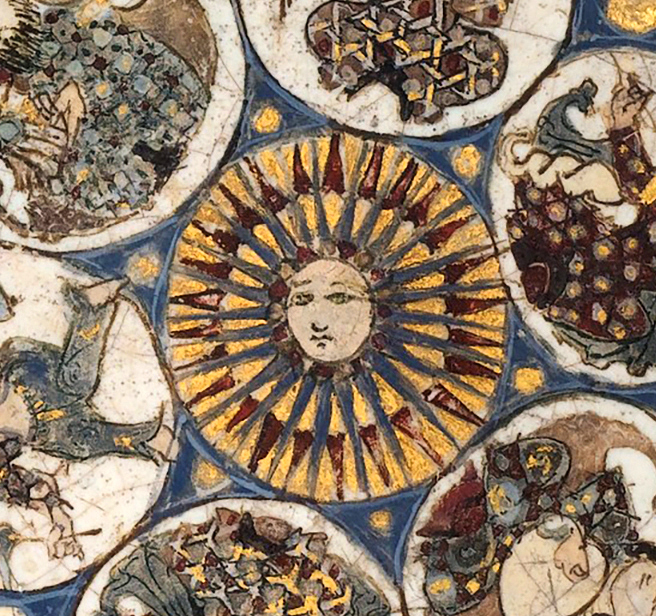 Detail from Bowl with courtly and astrological motifs from northern Iran

"In his book Kitab suwar al-kawakibal-thabita, known as the Book of Fixed Stars, Abd al-Rahman depicted forty-eight constellations (the fixed stars) that were believed to occupy the eighth of the nine spheres surrounding the Earth,” writes Hoborn. “The significance of Abd al-Rahman in the medieval world is evident in an illuminated manuscript dating from the mid-fourteenth century, which is described as an astronomical atlas by Abd al-Rahman al-Sufi. It was made in northern Italy and is housed in the ancient library of the Strahov Monastery in Prague. The original accomplishment emanating from the court of Isfahan had been elegantly reproduced in western Europe four centuries after Abd al-Rahman’s introduction of Western theory to Arab scholarship.”

Indeed, Abd al-Rahman's beautiful, useful depiction of the heavens didn’t just live on in European monasteries, but also in Persian ceramics. Sun and Moon features a beautiful bowl from late twelfth or early thirteenth century northern Iran, decorated with courtly, astrological motifs, with the Sun at the centre. "Mercury is represented as a scribe with a scroll, Venus as a female musician,” writes Holborn. “Saturn as an old man with a pick axe, Jupiter as a judge in a turban, Mars as a warrior with a severed head, the Sun as a figure with a solar disc, and the Moon as a figure with a lunar crescent.”

For more on the changing, earthly views of our heavens, order a copy of Sun & Moon here.

More on Why today is actually Sun Day