On the anniversary of his birth, we examine how Fontana’s slashed canvases led the way for a generation of artists

Art history isn’t perfect. The intentions, achievements and importance of this or that painter or sculptor is not always readily appreciated by those who write the history books. Yet how well do artists understand their own place within the canon?

Take Lucio Fontana, who was born on this day, 19 February, in 1899. He is best-known for slashed and stabbed canvases, which he created from the late 1940s up until his death in 1968. However, it is hard to gather this from his own writings, wherein he set out his ambitions to create an entirely new type of art he called Spatialism – a movement he hoped would transcend the limitations of art at that time. He wrote in his Technical Manifesto from 1951 the he and his like-minded artists would not settle for simple “paintings nor sculptures, but forms, colour, [and] sound through space… After millennia of analytical development in art, the moment has come for synthesis,” he goes on. “We conceive synthesis as a sum of physical elements: colour, sound, movement, space, which integrate an ideal and material unity.”

It’s a heady, slightly unclear statement of intent. However, as Morgan Falconer explains in his book on post-war art, Painting Beyond Pollock, Fontana began to create his famous punctures paintings in 1949, less as determined step towards some unrealised artistic shift, and more as a simple investigation of his own artistic capabilities. This initial series canvases, classified by the artist as ‘buchi’ or holes pictures, were, according to Falconer, “inspired in part by constellations of stars. Fontana had been fascinated by the night sky in Argentina” where the artist had lived for some years. 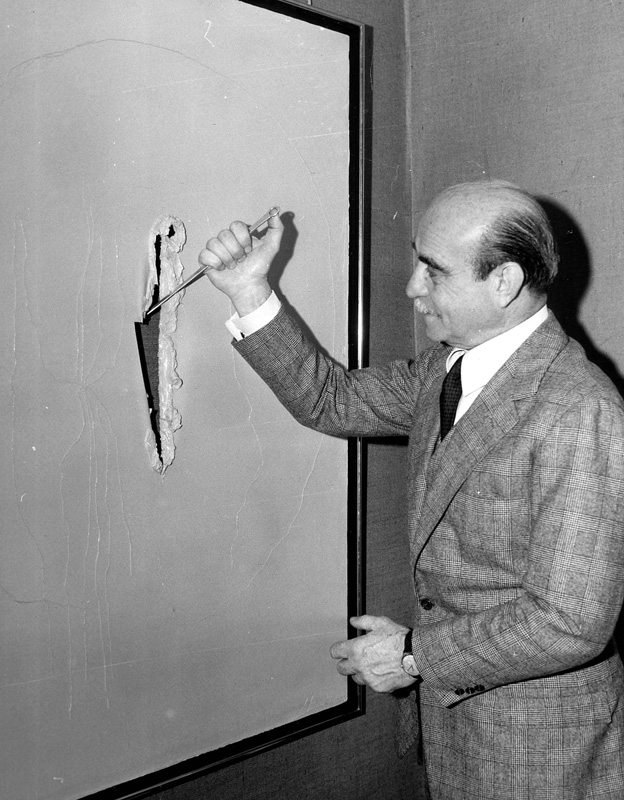 Some critics interpreted the wounding literally, relating the works back to Fontana’s military service. Others rejected the works as a vulgar debasement of painting, while others celebrated the way he had overcome the flat limitations picture making.

Fontana certainly drew artistic satisfaction these works, and developed his style, lighting the paintings from behind, or backing them with black cloth to make the holes more vivid. He began to favour single-colour canvases and, 1958, abandoning the holes for the slashes or ‘tagli’ works. The painter sometimes compared these to the wounds of Christ, as well as female genitals, yet Falconer sees the slits as “a stylised dramatization of the painterly gesture.”

And while they don’t amount to an entirely new form of art, they certainly set an example to younger artists. As we note in our Arte Povera book, Italy’s young, hubristic 1960s ‘poor art’ movement not only protested against the old ways and materials of art making by fashioning works from mud, twigs, cloth and cement, but also reworked by the role of the artist, seeing him or her as a mystical individual, able to turn base material into fine objects with a stroke of a hand. And who better to set an example than this charismatic Milanese artist, slashing away at his canvases?

The great German painter Gerhard Richter was also shocked by the brazenness of Fontana’s canvases, when he saw them as young man at Documenta II in 1959. Richter may not have reached for the kitchen knife, but he did find new ways to treat picture making. 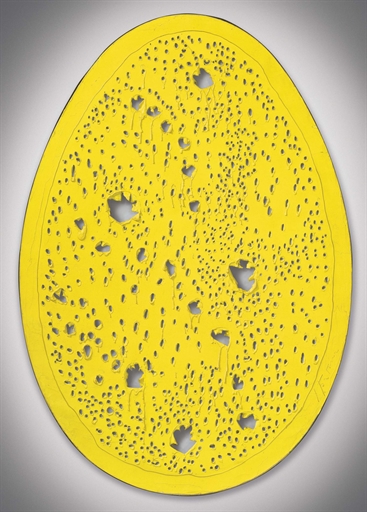 Spatial Concept, the End of God (1964) by Lucio Fontana

If Fontana never achieved his Spatialist unity, he did, thankfully show others how ambition, innovation, violence and a certain amount bald-faced of audacity can nudge 20th century human endeavours along. For more on Fontana’s painting get Painting Beyond Pollock; for more on Arte Povera consider this book.

More on A slice of Lucio Fontana