The 91-year-old painter will accept the accolade at the Cooper-Hewitt, Smithsonian Design Museum tomorrow

What links Clint Eastwood, fashion designer Ralph Lauren and the much loved British TV presenter Sir David Attenborough? The James Smithson Bicentennial Medal. This award, named after the founder of the Smithsonian Institute, is given “to persons who have made distinguished contributions to the advancement of areas of interest to the Smithsonian.”

The definition is as broad as the Smithsonian’s collection, which includes the Apollo 11 Command Module, textile designs by Pablo Picasso, and a 1968 psychdelic Jefferson Airplane concert poster. 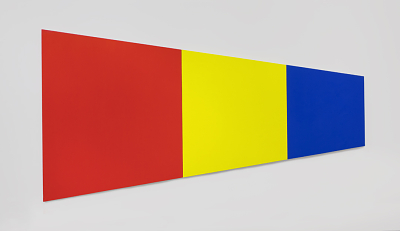 Kelly may not have played Dirty Harry or popularised mid-market polo shirts, but his contribution to American post-war painting is incredibly well established. As author Morgan Falconer explains in our new book Painting Beyond Pollock, Kelly was a one of a handful of artists who baulked at the vain, swooping gestures of Abstract Expressionism, and sought to make a simpler, cleaner, less-self-regarding style of art.

Taking the Dutch de Stijl and Russian Constructivism as influences, Kelly also served in the liberation of France during World War II, which brought him into contact with European modernism. Fusing architectural ideas with new artistic ambitions, Kelly went on to make clean, beautiful ‘unsigned painting-objects’, anonymous, erased of individuality, and reduced to a geometric purity.

Today we commonly refer to this style as Geometric Abstraction. It was a high-concept approach, and one that although it didn’t wholly take root in the same way as Abstract Expressionism. Nevertheless, Kelly’s paintings influenced and found echoes in the Pop objects and minimalist canvasses of later decades. 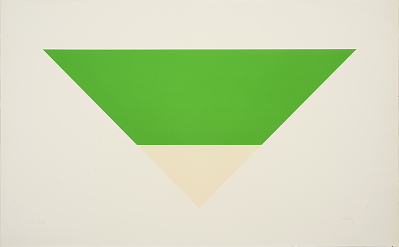 Moreover, Kelly himself has ensured his styles and notions endure, since, at the age of 91, he has continued to produce extremely powerful creations that continue to embody these bold ideals. Earlier this year the University of Texas published renderings of a chapel-style gallery Kelly had designed to house his own works, which the artist and the institution hope to open within U Texas’s Austin campus soon. Proof that, even in his nineties, Kelly still has some distinguished contributions to make.

To find out more about this medal presentation, which will take tomorrow, April 17, at the Cooper-Hewitt, Smithsonian Design Museum in New York City, go here; for more on Kelly's place within contemporary painting, buy a copy of Painting Beyond Pollock; and check back soon for exciting news about our forthcoming Kelly monograph.