Legendary Pop artist Peter Saul is working on a picture of Donald Duck versus Mondrian. What’s that about?

Peter Saul is being given his due, belatedly, at the age of 80. The American artist, whose pictures are crude and cartoonish yet steeped in the tradition of classic historical painting, has a new show From Pop to Punk at Adam Lindemann’s New York gallery Venus over Manhattan; the exhibition features Saul's work from the 1960s and 70s. It follows several recent US retrospectives after decades of under-appreciation. The pictures in the show are from the collection of late art dealer Allan Frumkin and include The Government of California, a 1969 rendering of Ronald Reagan flanked by references to the War on Drugs and the Bank of America, foreshadowing his presidency, as well as Saul’s controversial depiction of political activist Andrea Davis being crucified. Phaidon.com spoke with Saul about art in his ninth decade. 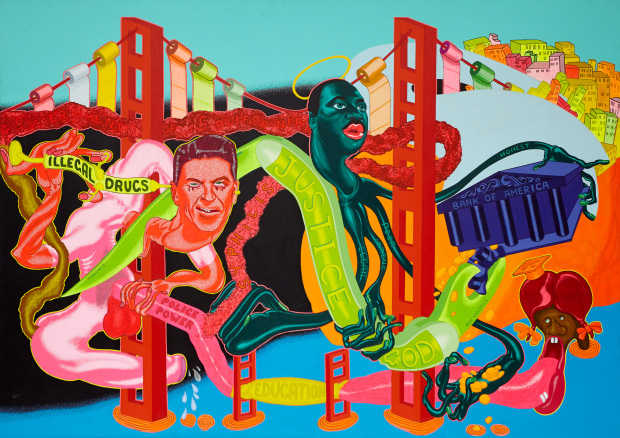 The Government of California (1969) by Peter Saul

How do you now regard the pictures in From Pop to Punk, decades after you first painted them?  "I went the opposite way to the art of my time. My speciality was using imagination and a lot of exaggeration. Then it was forbidden so I enjoyed doing it! In terms of my art style I am very much an exception. The art of the time was strict, formal and not giving. Looking back, the art of the 1960s and 70s does seem silly. What makes something Pop Art is the attitude towards the subject but the official idea of Pop Art was that it depended on the technique. You had to copy something from the media. I think Americans are not comfortable with imagination and surrealism, which I think are kind of OK!"

Paradoxically, your art was deemed as radical during what we now think of as being a radical era. "When I moved in 1964 to Mill Valley, near San Francisco, there were three things going on that were interesting: the protests against the Vietnam War, drugs and self-discovery by means of psychiatry. My own experience of these things is zero. I wasn’t in the military; I haven’t used illegal drugs except marijuana four or five times which I did not particularly enjoy, and I haven’t been to a psychiatrist. I only attended one protest and nothing happened to me because I may have looked like an FBI agent. I wore a tie and was smoking a pipe. No wonder nobody hit me!" 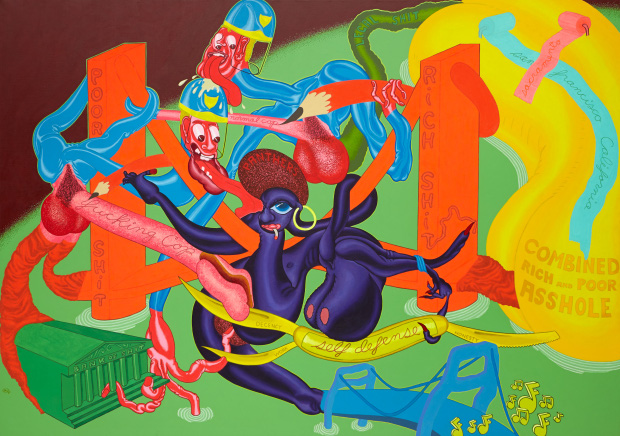 You have painted Ronald Reagan on several occassions. Did you ever meet him? "No. It might have been embarrassing. I didn’t like Reagan but I have to admit that I exaggerated him and his impact which I made up greatly. But I did it for art!"

It seems like you were also sending up counter culture? "Somewhat. I sent it up accidentally or on purpose. The counter culture made me laugh because I see humour in behavior. I had leftist views but I guess I was conservative. If you’re not conservative in some aspects of your life, you probably make up for it in others. I’ve been conservative financially and remained married for forty years. That gives me the right to be a nutcase when I get to the studio!"

What are you working on now? "A picture of Donald Duck versus Mondrian. They have boxing gloves and are punching it out. Duck is getting the worst of it. The new pictures will be on show in Los Angeles a few months from now." 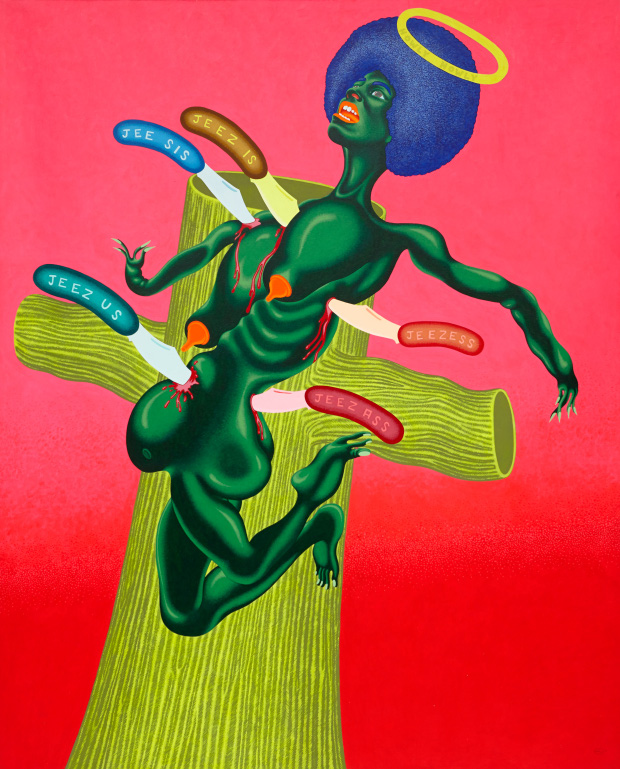 The Crucifixion of Angela Davis (1973) by Peter Saul

From Pop to Punk runs from February 25 until April 18 at Venus Over Manhattan. For greater grounding in art from this period consider our Pop Art books, and for more on painting from this time, order our new book Painting Beyond Pollock.

More on ‘I’m a nutcase when I get to the studio!’