Modernism was viewed by many as an affront to the old ways of doing things, so it's interesting to see that, a century later, one of the movement's earliest works is being raffled off to preserve a World Heritage Site.

L'Homme au Gibus (1914) or The man in the Top Hat is a late Cubist work by Pablo Picasso, created after better-known pieces like Les Demoiselles d'Avignon (1907), but still a good example from this period. The 30.5 cm x 24 cm gouache-on-paper artwork, offered by an anonymous donor, is signed and has been authenticated by appropriate bodies, and now holds estimated value of €800,000 to €1,000,000.

Art lovers without the funds to put in a bid for such a piece could stand the chance to win one, thanks to the 1Picasso100Euros.com. The online lottery is the first of its kind authorised by the French state and is overseen in partnership with Sotheby's. Yet the giveaway isn't simply being held to introduce a new gaming model into the art market.

Its organisers plan to take the proceeds from their 50,000 €100 tickets, and establish two heritage projects in the ancient Phoenician city of Tyre, on the southern coast of Lebanon. Tyre, founded in about 2750 BC, lies close to the current-day Israeli border, is a Hezbollah stronghold, and has suffered badly in recent bombing raids. 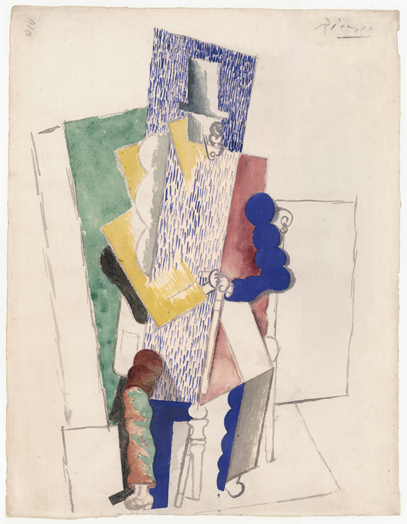 The €5000,0000 raised though the lottery will fund a new artisanal village and a cultural institute. To a gimlet-eyed gambler, these 50,000:1 odds might not be too inviting, but in the realm of the national lottery, these are far from terrible, and they go to fund a good cause.

The draw will take place 18 December in Paris. To find out more, and to buy tickets, go here. To discover how Picasso's Cubist period fits in with both his later and earlier works, please consider our books, including the award-winning Picasso: Style and Meaning, as well as our introductory work, authored by fellow artist Roland Penrose.

More on Your chance to win a Picasso from Sotheby's