The Italian design agency Accurat has charted the lives of Picasso, Dali et al. What can we learn?

While we are fans of weighty history books and big biographies, it’s always pleasant to see old subjects squished about and presented in compelling new ways. The US graphic designer and man behind Facebook’s timeline, Nicholas Felton, has been producing his own annual autobiography in stats, The Feltron Report, since 2005. How would some of the lives and works of some of the world’s greatest creators fare, if they were given a similar treatment? 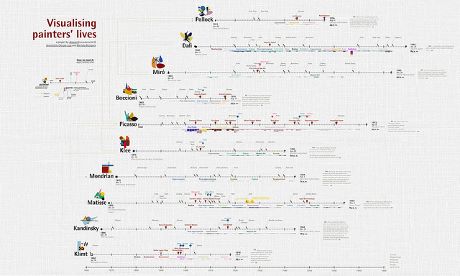 Well, Accurat is an information design agency based in Milan and New York, which works with the likes of the website and newspaper Corriere della Sera, to present facts and figures in new and interesting ways. It's crunched through the information behind various Nobel Prizes, and plotted social networking data onto maps of Milan to show how people move around the city during the week, at weekends and during special events such as Design Week. 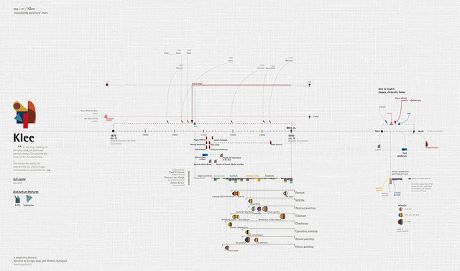 Now it's turned its attention to the lives of great 20th century artists. These annotated time lines present Pablo Picasso, Salvador Dali, Joan Miró, Umberto Boccioni, Paul Klee, Piet Mondrian, Henri Matisse, Wassily Kandinsky and Gustav Klimt both collectively and as a series of individual charts. As you can see, they're a little bit small so they're best viewed in their original format. 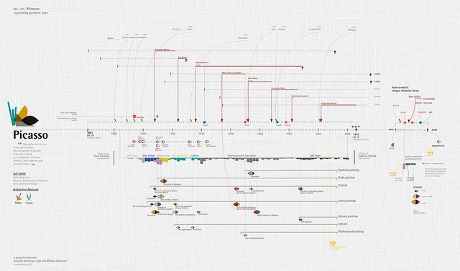 Bald biographical data and key scholastic facts, such as the year in which Matisse went to Tahiti or the date of Pollock’s first solo exhibition, are marked, as well as more frivolous information, such as the sequence of Picasso’s girlfriends, or Klee’s left-handedness, and softer, perhaps, harder to verify figures, like the levels of artistic production during a particular year. 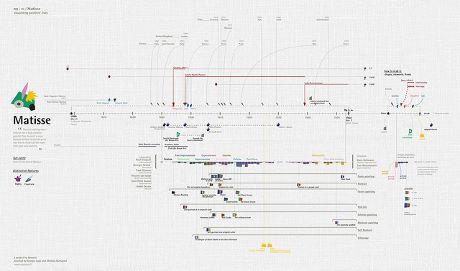 Individually, they’re a neat summation of lives, yet viewed collectively, Accurat’s charts demonstrate how (if you set any kind of store by) how much more prolific Picasso was, when compared with his contemporaries. In Accurat’s reading, only Matisse and Dali come close. Also, great world events, don’t feature highly in the charts. Though Boccioni died in active service in 1916, neither Picasso and Dali’s output appears to have been dented by either World War I or II. 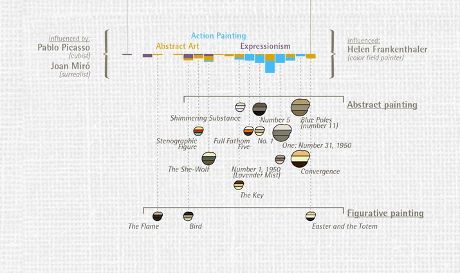 Perhaps there are some life lessons to be learned here too. Great artists traveled widely, though tended to return to their place of birth towards the end of their lives and the greatest ones tended to produce a huge amount of work, in very many different styles. To draw your own conclusions, go here.

Of course, there’s plenty that can’t be revealed in stats alone. For a greater insight into these artists' lives and works, take a look at our Picasso, Dali, Klee, Mondrian and Klimt books, as well as our Art Book, an A-to-Z guide to the greatest painters, photographers and sculptors from medieval times to the present day. Last but not least, don't forget The Art Museum, the finest art collection ever assembled between two covers of a book.

More on Charting the lives of great artists